Weekend TV guide: Nine of the best shows to watch 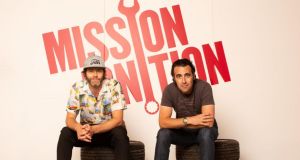 The Late Late Show
Friday, RTÉ One, 9.35pm
Among the guests are former Republic of Ireland soccer internationals and Liverpool players Jason McAteer and John Aldridge, who are appearing in support of  Sean Cox, the Liverpool fan who was left with horrorific injuries after being assaulted at Champions League fixture at Anfield. They appear ahead of a fundraiser game next month between Liverpool Legends and a Republic of Ireland selection in aid of the Sean Cox Rehabilitation Trust. Also: YouTuber and author Riyadh Khalaf found it a daunting to come out to his Irish-Catholic mother and Muslim Iraqi father. Khalaf explains what it was like to grow up as a gay kid in Ireland, and why he hopes that his new book will help young gay people embrace their differences. Plus: In 1999, Guido Nasi was visiting Ireland when he was attacked in Dublin, leaving him unable to walk or feed himself. He recounts happened that day, and why he’s celebrating a new chapter in his life. With music from singer-songwriter Damien Dempsey and the stars of The King and I.

MasterChef: The Finals
Friday, BBC1, 8.30pm
The remaining three amateurs in the BBC’s cooking competition have to really come up with the goods before judges Gregg Wallace and John Torode choose which of them will become the 15th MasterChef champion. There’s just three more hours for them to prove their worth by producing jaw-droppingly good food for the judges. Which one of them will follow in the footsteps of previous winners Jane Devonshire, Saliha Mahmood-Ahmed and Kenny Tutt and become the 15th MasterChef Champion?

Gardeners’ World
Friday, BBC2, 8.30pm
Monty Don gets busy on the vegetable plot and takes the next step in planting up his new Paradise Garden. With Mothering Sunday around the corner, he also provides timely inspiration for planting up a spring pot as a present. Frances Tophill is thrilled to have her own allotment this year, and here shares her plans for the season ahead, making a start on getting it shipshape. The programme also visits the alpine house at RHS Garden Wisley to find out from the experts how they care for some of the smallest and most colourful spring gems.

The Ray D’Arcy Show
Saturday, RTÉ One, 10.20pm
Fresh from their victory on Dancing with the Stars, Mairead Ronan and John Nolan talk about taking home the glitterball trophy and what’s next for the queen and king of the dancefloor. Also: Joe Brolly chats about his role as Cystic Fibrosis Ireland ambassador ahead of the charity’s 65 Roses Day on April 12th. They are joined by Shane Halligan, who received a double lung transplant in 2015. Ray will also catch up with two titans of Irish TV, Francis Brennan and Dermot Bannon. Plus: Kilkenny woman Jenny Moylan on her dramatic 10-stone weight loss in the last year; Kerry's famous Bat Family in the studio for a performance of their latest viral video; comedian Patt Shortt; and music from Stockton’s Wing.

Mission Ignition
Saturday, Channel 4, 8.30pm
Howard Donald loves classic cars. In fact, before becoming a major heart-throb during Take That’s first stab at fame, he earned a living as a panel beater and vehicle sprayer. Since then he’s turned his hand to racing, competing at Le Mans and Silverstone. Dario Franchitti, meanwhile, is a bona fide superstar of the track, having won the IndyCar series four times, the Indianapolis 500 three times and the Daytona 24-hour race. The duo come together for this new series in which they challenge teams of amateur car enthusiasts to rebuild a classic motor. If they’re successful, they get to drive away in it.

Hotelier Francis Brennan takes a break from whisking celebrities off to foreign countries by rejoining his brother John Brennan for another series of the restaurant and hotel makeover show. The siblings are celebrating 10 years helping people in the industry maximise their potential, and they’re looking forward to helping another batch of proprietors get their gaffs up to scratch. Their first task is a cafe and B&B at the Irish Military Museum in Starinagh, Co Meath. Will it be a battlezone, or will the owners surrender to the brothers’ ideas?

The Jed Mercurio-created series has proven one of BBC’s biggest hits, so it’s no surprise to see the cast – including Vicky McClure, Adrian Dunbar and Martin Compston – return for a fifth series. Set two years after the events of season four, it starts with a bang: a transport carrying seized drugs is hijacked and three police officers are killed. Was there police collusion? That’s what the AC-12 anti-corruption unit has to find out (I’m guessing there probably was). Stephen Graham joins the cast as a ruthless gang leader who soon shapes up to be AC-12’s most formidable adversary.

Daniel and Majella are about to be ousted by RTÉ’s newest power couple. Broadcaster Marty Morrissey and comedian Bernard O’Shea struck up a bromance while competing on Dancing with the Stars, and now they’ve decided to team up for a male odyssey in search of what it means to be a man in 21st-century Ireland. The journey takes them across the pond to New York, where they are immersed in the world of male grooming, men’s fashion and social-media influencing. Luckily, Bernard is blessed with rugged David Beckham looks, and Marty is a dead ringer for Daniel Craig; they just need to learn how to bring out their inner hunks. Along the way they meet various icons of modern manhood, including Bernard Brogan and former Roscommon footballer Neil Collins, who is forging a new career as a fashion model in the Big Apple. Will Marty and Bernard transform into the ultimate ideal males? Or were they already perfect to start with? We’ll be settling down with the prosecco and stonebaked pizza to watch this bromance blossom.

Tasmania: Weird and Wonderful
Sunday, BBC2, 10pm
On Friday, David Attenborough’s dulcet tones will feature in Our Planet, Netflix’s eight-part series about the state of the Earth and its creatures. It promises to be a major hit for the streaming giant. Ahead of that here is a chance to hear Attenborough narrate this natural history documentary, which features extraordinary footage of the Australian island’s wildlife. Among the animals featured is the Tasmanian devil which, despite its name and depiction as something completely crazy in cartoons, is revealed to have a gentle side to its nature. Look out too for rare white wallabies, venomous jack jumper ants, and caves illuminated by thousands of glow worms. There’s also an opportunity to see platypus, giant lobsters and miniature penguins in their natural habitat.