Meanwhile, Kardashians’ show has become a series about anxieties of modern celebrity 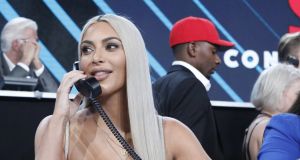 This week, The Only Way is Essex (Towie, ITV) crew hit Dublin, and, much like when they take EastEnders characters out of the Square, some of its intrinsic magic – the key suspension of disbelief essential for all reality telly enjoyment – manages to disappear.

Towie folk should only exist in their natural habitat: the faux baroque bar fittings in Sugar Hut, occasionally escaping to the Chardonnay sunshine of Marbs. Seeing the boys roam around a deserted Temple Bar or the girls clack through the cobbled streets pointing into the middle distance,their HD brows, tattooed necks and bleached smiles feel like they’re almost too much to be contained within the confines of our small, non-Essexy city.

There’s the creeping, uncanny valley sensation, a real fear that at any moment Arg’s new nose might poke through the screen or Pete’s imitable “style” (like an extra in a Guy Ritchie version of Oliver) would be mercilessly mocked by passing tracksuited kids on BMXs.

There’s no glamour in witnessing the cast huddling in a shivering mass around a keg outside the Temple Bar, which is why most of the shooting is kept indoors in flash establishments such as Lillie’s Bordello and Number 22. They could be any random venue in their hometown, making the whole escapade feel slightly pointless.

It was an excuse for Dan to re-think his exclusivity with deluded Amber T, who was left at home to have a snotty-cry phone conversation with him about what “bits” he’s been getting up to with random ladies. Other than that, it’s all about the “Oirish craic” soundtracked by the Dropkick Murphys with close ups of Molly Malone’s bronzed cleavage.

Like Ryanair flight stag-lads, Liam Gatsby and the rest of the boys down pints of Guinness as if they were swallowing constipation medicine before giving up and going back to their regulation selection of primary coloured cocktails. The ladies don’t fare any better, with Chloe Lewis gagging on a mouthful of whiskey and the divine diva herself Ms Gemma Collins inelegantly spitting her Slippery Nipple back into its glass with a solitary “Nah”.

There’s the standard jokes about potatoes and leprechauns but it’s James Lock sounding like an exasperated Ray Winston who sums up our curious place on the mini-break pecking order: “It ain’t Venice, it ain’t romantic innit? You just come here for a knees up.”

Welcome to Dublin, the Butlins of European cities.

The Kardashians are usually purveyors of the most enviable of mini-breaks to ridiculously exotic locations (Keeping Up with the Kardashians; E!). The second episode of the new series follows on with this tradition as Kourtney celebrates her birthday in film producer Joe Francis’ Mexican mansion (he’s perhaps best known for the now-defunct Girls Gone Wild series).

Kim suffers another post-Paris panic attack and things fail to improve when the paparazzi capture apparently unflattering photos of her bikini-clad body causing Kim to spend the rest of the time clutching her phone endlessly, while zooming in on her thighs and desperately de-tagging herself throughout Instagram.

No longer luxurious escapist television, KUWTK has transformed into keeping up with the anxieties of modern celebrity: a malaise you cannot escape from, no matter how far you travel.