Artist Kanye West opens up to US president Donald Trump about bipolar disorder, guns, hydrogen powered planes and a host of other issues in an atmosphere of "good energy." Video: Reuters 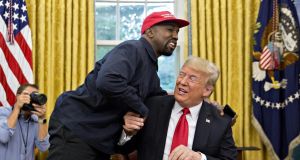 Kanye West and Donald Trump in the White House

Like that grotty foil packet of salt/sweet popcorn slowly acquiring a thin film of dust and grease on a neglected newsagent shelf, 2018 was something of a mixed bag for internet culture. On the plus side, arts and technology regularly combined to create new, exciting modes of expression that would be impossible at any other time. On the downside, many of those very same forces occasionally spewed forth uncannily depressing new nuggets of novelty, further paving the planet’s way towards a dystopian nightmare of trolling, tracking and incredibly loud YouTube personalities. Here’s an eight-point tally of tropes that trended in the past 12 months.

1. The internet can be scary and that’s bad

There are many axioms about internet culture that are pretty much always true, one of them being the longer a meme exists, the probability of it incorporating the face of Nicolas Cage approaches. It was only after seeing a humorous video clip in which dozens of famous cinematic moments had been AI-altered to star Cage that we discovered the same AI technology was being used to create face-swapped pornographic imagery of celebrities, or blackmail material for members of the public. All of which should be terrifying for those who detest the term “fake news”.

2. The internet can be scary and that’s good

It was also a great year for the social media-embedded horror story, from the ongoing creepiness of Adam Ellis (@moby_dickhead) and his Dear David series, to the astonishing achievement of the BBC’s Twitter-entangled live Halloween special of Inside No 9, and Netflix’s Easter Egg packed freeze-frame-a-thon, The Haunting of Hill House.

3. Discussions around diversity became a blessing

Hugely boosted by internet followings, black directors occupied the No 1 and No 2 spot in the American box office this February when Ryan Coogler and Ava DuVernay brought out Black Panther and A Wrinkle in Time, respectively. The former was the most-memed-about film of a year that also had a new Star Wars spin-off and the biggest Avengers movie yet, while Crazy Rich Asians became the first major US movie with an all-Asian cast in 20 years, and the eight million views of the Chinese language hash tag it engendered showed the industry that audiences exist for more diverse material, and those audiences are very, very online.

Although mostly depicted in the wider culture as a left-wing tendency, the depressing proliferation of bad-faith outrage against so-called political correctness was a predominant force in this year’s web. There was a depressing spree of online boycotts, protests and minor shitstorms generated by angry young men for whom steps toward equality resemble oppression. Chief among these were the Mensa candidates who began crowdfunding a version of The Last Jedi that had fewer minorities, the very normal guys who decried Netflix’s She-Ra reboot on the grounds its animated women were insufficiently sexy, and those who objected to an orange-skinned character in DC GO’s Titans being played by a black actor. As we reported then, Lie-Ba @leebee416 placed a digit on the collective pulse when she tweeted, “Jennifer Lawrence isn’t fucking blue so where was this energy when she was cast as Mystique?”

5. Beef returned to the menu

Few things about the internet have been more disappointing than its apparent inability to facilitate fast, blistering, multimedia rap beefs, but this year it finally caught up. Drake and Pusha T took to Soundcloud, Twitter and YouTube to tear each other apart with diss tracks and clapbacks this June. It ended with a pummelling for Drake, left having to explain pictures of himself in blackface, and the alleged abandonment of his illegitimate child. “Drake thought he was getting into a war with a rapper,” tweeted Shea Serrano, “and ended up in a war with the team from Spotlight lol”. Elsewhere Eminem managed to scramble back some of the cred he lost when he decided to grow a beard that looks like nail varnish smeared on a playing card, crafting a diss track against Machine Gun Kelly that propelled the latter right back into the bucket marked “Who?”

Nicki Minaj was one of several high-profile figures to take on streaming networks this year, but directed her ire to the way they capture “sales” for their chart placings, claiming Spotify robbed her of a No 1 album by counting copies of Travis Scott albums that were sold as bundles with merchandise and concert tickets. Leaving aside the fact that Minaj engaged in those very same practices herself, albeit less successfully, a good deal of credit in her argument was lost when she started specifically denigrating Scott’s wife, Kylie Jenner, and their daughter for promoting the record online. Spotify also had hundreds of complaints from users who felt aggrieved when the platform’s promotion of Drake’s new album placed the Canadian MC as the cover art for every single playlist in their library, including the likes of Hot UK R&B, on which he could never have been included. Who could have thought that would backfire?

On the other hand Taylor Swift showed she knew what she was doing by signing a $200 million deal with Universal that instructed them to give better Spotify earnings to all artists on their roster, not just her, cementing her path from punchline to the unlikely Robin Hood of pop in one fell swoop. “She’s a superhero, bye.”

8. Not all publicity is good publicity

If there was one rubric that needed to be lanced from the pus-filled boil that is the collective consciousness, it’s the idea that anything an artist can do to get clicks is a net positive for their brand. Kanye spent most of the year engaged in a one-man quest to destroy every shred of good feeling he had built up over a decade as one of the world’s most beloved musicians; sharing alt-right memes, promoting the movement’s personalities, questioning the moral fortitude of slaves and even sharing truly terrible Rick & Morty fan art. He also appeared in the Oval Office for a head-scratching appearance with US president Donald Trump that was so pulverisingly inscrutable, he achieved the unenviable feat of making less sense than its current inhabitant. After weeks of digging himself into a deeper and deeper morass, and no little debate about his mental health from concerned onlookers, he appeared to recant. “My eyes are now wide open,” he said. “I’ve been used to spread messages I don’t believe in,” he concluded. If ever there was a statement that could have been uttered by the internet itself in 2018, this was it.