Letterfrack celebrates ‘bit of a looper’ mentor and activist 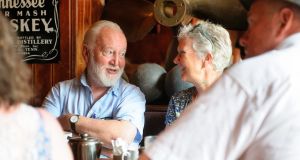 Leo Hallissey and Clare O’Toole: “We have created a place associated with kindness and creative, and beauty and welcome.” Photograph: Aoife Herriott

“He sits at the back of the room. He lurks around the edge of the gathering. He’s down the corridors somewhere, doing something. He’s a nice country fellow, you’d say. Very quiet.”

“Not a stranger to anger at our carelessness towards the world we live in. Not taking resistance for granted. Working for it, seeking ways out of the conundrum . . .”

With a sharp film-maker’s eye, Lelia Doolan captures the impressions of many on meeting Leo Hallissey. The mentor, teacher and community activist has spent the past 34 years hosting over 100 festivals, and more, to celebrate a long love affair with his adopted north Connemara. These achievements, however, would not have been possible without his wife Clare O’Toole, his colleagues and his neighbours.

Hallissey has been much moved, and not a little mortified, by the extent of the tributes

Many a music session, sports event, book fair, banquet, parade and talk took place in “classrooms, in tearooms, in barrooms and frequently in no rooms at all, but in the great outdoors of bog and beach, shore and swamp, woodland and wetland”, according to Artisan House publishers Mary Ruddy and Vincent Murphy of Letterfrack.

“And much of the most cherished memories were created in your welcoming and hospitable home amongst your family, Oisín, Fíachra and Clíodna – tables laden with food, an endless supply of fresh baking, convivial company, best music, a dash of madness, all offered with style and natural grace,” they write in the introduction to a “magic book”, 150 contributions collated for a banquet to mark the retirement of Hallissey and O’Toole.

Hallissey has been much moved, and not a little mortified, by the extent of the tributes. He says he still has all the energy of the “bit of a looper with a messianic zeal” – zeal that fuelled the foundation of the Connemara Environmental Education and Cultural Centre.

Hallissey stresses this body has always been, and will continue to be, a community effort, and remembers the contribution of the late Aingeal Ní Chonghaile who died earlier this year.

Letterfrack village, 13 km north of Clifden, was founded after the Famine by Quakers James and Mary Ellis. It was still synonymous with grief and suffering when Hallissey, originally from Co Clare, moved from Dublin to take up a primary teaching post.

More than 2,800 boys had passed through St Joseph’s Industrial School in Letterfrack from 1888 to 1974, and 126 complaints against 68 individuals associated with it were received by the Commission to Inquire into Child Abuse in 2000.

Shortly after the industrial school’s closure, a group of community activists purchased the school buildings and convinced the State to transform the farm and lands around Diamond Mountain into what is now Connemara National Park.

“The founders of Connemara West plc were visionaries and it is they who laid the foundations for what we do now,” Hallissey says, extolling the work of two surviving members, Joe O’Toole and Michael O’Neill.

The former industrial school’s main building now houses the Galway-Mayo Institute of Technology’s furniture design and wood technology department, while the Conservation Letterfrack company, run by Sven Habermann, undertakes work for State institutions and others, with clients ranging from Marsh’s Library and Adare Manor in Co Limerick, to the National Gallery of Ireland.

“Just think of it,” says Hallissey, “in this small village we have over 500 people involved in education at all levels, from the creche and primary school to an adult education centre, Youth Reach, and GMIT, while Connemara West has further plans for a complex for overseas students . . . It means that accommodation for visitors is occupied for 90 per cent of the year. When the students leave, the summer tourists arrive.”

“We have created a place associated with kindness and creative, and beauty and welcome,”he adds.

The model is “a shared space, of love and care, above all for the stranger”, Hallissey says, quoting from The Prophets are Weeping , a poem President Michael D Higgins wrote in 2014 after the Yazidi people were driven from their mountains in northern Iraq.

The collection has been published by Artisan House, with an accompanying CD of the poets reading their work. Music by Conor Keane is performed by 40 young players and their teachers Marie Walsh, Mary Bergin, Yvonne and Liz Kane and Micheál Ó Cuaig, while teenager Séamus Ó Flatharta sings Johnny Seoighe, a tender rendition of famine hardship.

Music and musicians have been integral to Hallissey’s community activism and environmental work, with Sharon Shannon barely out of teenage years when she first played at one of his festivals, and Seán Tyrrell performing his interpretation of Brian Merriman’s Midnight Court.

Hallissey and O’Toole stretched their “open house” to its limits in those early days. “I remember waking up one morning and stepping over various bodies on the floor, including Seán Tyrrell fast asleep, swaddled in a curtain,” Hallissey says, laughing.

Hallissey has no intention of pulling back from much of his community work, as he is still director of three companies. The festivals will continue, he hopes, and the annual Inishbofin summer school will run under the tutelage of Dr Noirín Burke of Galway Atlantaquaria.

“That summer school works so well for the island and for us,” says Hallissey. “One of the hallmarks of its success is that retired teachers will actually return to attend it.”

Letterfrack bucks the “rural Ireland is dying” trend, he knows, but it requires constant vigilance. Central to Hallissey’s ethos is a refusal to accept a “one size fits all” policy adopted by the State, whether it is an educational system that rewards “performance rather than expression”, or social housing that doesn’t allow for individual design, or economic models that do not treat the community as stakeholders and exploit, rather than sustain and nurture, existing resources.

“We have Clúid housing association working with us, and we have set up Connemara Care to provide homecare packages to the elderly and vulnerable, but we need more imagination from the Government – extending from local authority architects who allow for some individualism, to initiatives which can make the most of our local fresh food and allow the thousands of tourists coming through here to experience that,”he says.

Forum Connemara also has plans to work on sustainable farming and walking tourism models in the Twelve Bens and Maumturks. It recently secured a grant under the European Innovation Partnership fund administered by the Department of Agriculture.

“We aim to mirror what Dr Brendan Dunford and colleagues have done with the Burren farmers through Burren Beo,” he says. “We aim to provide a template for how a coastal community can thrive.”

In the meantime, Hallissey has grandchildren to spend more time with and more people to meet.

In the “magic book” prepared for the retirement banquet, Tyrrell recalls overhearing a conversation in a bookshop, where a woman described how her children’s teacher “brings them out into the bog and the sea shore filling their minds with the wonders of nature.”

“I said to myself that has to be the one and only Leo Hallissey she is talking about. Honoured to call him friend.”

Amanda Gorman: The young poet and the poem that stole the Biden inauguration show