How to win Friends: Netflix pays $100m to keep Ross and Rachel 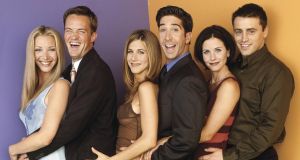 Netflix knows how to win Friends. The streaming service has struck a deal to keep showing Joey’s thespian trials, Chandler’s hapless sarcasm, Monica’s compulsive cleanliness, Phoebe’s feline riffs and the seemingly permanent courtship of Ross and Rachel for at least another year. But it will come at a steep price: the company will pay about $100 million, or almost €90 million, to keep the rights to the show’s 10 seasons, according to two sources.

Questions about the comedy’s future began over the weekend when customers spotted a notice on Netflix’s Friends page that read: “Availability Until 1/1/19.” Some of the show’s fans turned apoplectic. “The only reason I have an account with Netflix is to rewatch Friends,” the American singer and actor Hayley Kiyoko posted on Twitter. “Why @netflix are you hurting us.” The Netflix account tweeted back: “I would never hurt you, Hayley.”

Later, the company officially announced the show would remain on the service. “The Holiday Armadillo has granted your wish: ‘Friends’ will still be there for you in the US throughout 2019,” Netflix posted in a tweet of Ross in an armadillo suit.

i would never hurt you, Hayley https://t.co/IO4hK17liq

The $100 million fee is a significant jump from the $30 million, or about €27 million, a year that Netflix had paid previously to show Friends. But key prices are being pushed up as new competitors enter the market: online viewing is the future of entertainment, so the industry’s biggest players have been retooling their streaming operations to take on Netflix and Amazon.

In the case of Friends, Netflix ran up against the complication that it had to negotiate the fee with the company that both owns Friends and is also about to become one of its new streaming rivals. AT&T, the American media and entertainment conglomerate, this year bought Time Warner, which made the comedy, in part so it could use both Friends and the other hit shows that came with the purchase to launch a streaming service of its own.

Friends is “content we definitely want on our platform”, AT&T’s chief executive, Randall Stephenson, said on Tuesday. “And clearly it’s important to Netflix as well.” He added that the new agreement is nonexclusive, meaning Friends will likely appear on AT&T’s coming service by 2020. The sides are now negotiating rates for after 2019 that will be significantly lower than $100 million a year, the sources said. It’s also possible that Friends could leave Netflix after next year, they added.

Streaming services have anticipated this type of change for years, by stressing the importance of their exclusive content. Netflix has spent billions building up original shows such as House of Cards, Orange Is the New Black and Stranger Things, for example.

But Friends, which originally ran on terrestrial television between 1994 and 2004, has found an especially receptive audience on the service, where it became available in 2015. Its popularity among the streaming set even prompted a 2016 New York magazine article entitled “Is ‘Friends’ still the most popular show on TV?” Whether it is or not, Netflix has decided it’s worth $100 million. – New York Times

Britain and Europe in a Troubled World: A wise guide to Brexit
4