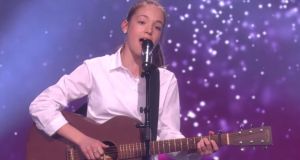 A video of an American boy yodelling in a Walmart store in the United States was the most watched video by users of YouTube in Ireland this year.

At the top of the list was 12-year-old Mason Ramsey, who performed an a cappella version of the Hank Williams country and western classic Lovesick Blues for customers of the Harrisburg, Illinois branch of Walmart.

The video became a viral hit almost overnight. Soon afterwards, he appeared on talk shows and signed a record deal with Atlantic Records. He released his first single within a month of appearing on YouTube.

Three amateur Irish musicians also made the list, with a video of 12-year-old Cork busker Allie Sherlock appearing on the Ellen DeGeneres show in the US taking third spot.

The others were Fr Ray Kelly’s rendition of REM’s Everybody Hurts on Britain’s Got Talent; and a version of Send in the Clowns by 81-year-old Evelyn Williams from Tallaght on Ireland’s Got Talent.

In ninth place was Jonathan Sexton’s last-minute drop-goal to secure a win against France in the first of this year’s Six Nations matches.

In showbiz, Kylie Jenner and her boyfriend Travis Scott introduced the world to their daughter Stormi in a video entitled “To Our Daughter”, while blogger David Dobrik and actress Liza Koshy announced their split in a video called “We broke up”.

Carpool Karaoke also made the top 10 with Ariana Grande’s appearance on the show earlier this year.

U2: All That You Can’t Leave Behind (20th Anniversary Edition) review – A timely reminder of their firepower
2