TV review: This is a self-consciously sprawling chronicle of the Aids epidemic in London 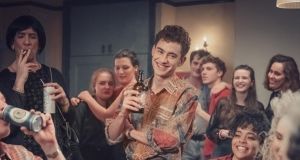 It’s a Sin: the cast has a Trainspotting-esque quality of big names on the brink, such as Olly Alexander

Russell T Davies is one of the great auteurs of modern British TV, and he’s shooting for the stratosphere with It’s a Sin (Channel 4, Friday, 9pm). This is a self-consciously sprawling chronicle of the Aids epidemic and its impact on the London gay community of the early 1980s: a snapshot of the carefree before times and the devastating aftermath. It’s wrenching and provocative and also often hilarious.

Davies insisted on casting gay actors in the lead roles, saying that not to do so in 2021 would be tantamount to putting a white actor in blackface or an able-bodied one in a wheelchair. The cast he has assembled has a Trainspotting-esque quality of big names on the brink, though the parallel may also have to do with Davies’s technique of introducing the characters via a vignette featuring their name spelt out on screen.

Olly Alexander, of the pop group Years and Years, has the headline role of Ritchie, a drama student. He’s a stand-in for Davies, who similarly arrived in London as a wide-eyed 18-year-old in 1981.

Alexander absolutely nails it as a cheeky lad with an inner well of sadness. We follow him as he leaves boring suburbia on the Isle of Wight for college in London. He is soon throwing himself into the arms – and most everything else – of the gay scene.

His circle of friends and lovers expands to include Omari Douglas’s Roscoe, the child of an Evangelical Nigerian family who try to pray the gayness out of him, and Ritchie’s straight bestie Jill (Lydia West). And then there is Colin (Callum Scott Howells), a shy gentleman’s fitter on Savile Row who becomes a housemate to Ritchie and the gang at a home they christen the Pink Palace.

The sensibility is very much of Davies’s late-1990s hit Queer as Folk, with shades of Tony Kushner’s New York-in-the-age-of-Aids meditation Angels in America. Aids makes its presence known first as a distant rumble, with Colin’s kindly mentor at work, Henry Coltrane (Neil Patrick Harris), falling ill to a mysterious flu-like malady. Soon there are mutterings on the street of something dreadful slouching its way from San Francisco and New York. Inevitably it will make landfall in London.

“Grid, it’s called,” whispers one of Ritchie’s friends (“gay-related immune deficiency” was an early acronym for Aids). But for Ritchie the big challenge is coming out to his loving yet deeply repressed parents (Keeley Hawes and a hilarious Shaun Dooley, dragging his old-school-dad knuckles across the floor).

Alexander is effortlessly charming, with just a hint of tragedy around the eyes. Patrick Harris, the token big name American cast to justify the support of HBO Max, which will air the series in the US, affects a perfect English accent. And the 1980s is wonderfully evoked via a soundtrack brimming with the period-appropriate synth-pop of Soft Cell and Orchestral Manoeuvres in the Dark. (Davies reads a whole new meaning into Enola Gay.)

As a portrait of, and valentine to, a lost era of gay culture, It’s a Sin is deeply affecting. And yet Davies, for whom the project is obviously hugely personal, packs in oodles of warmth and humanity too. The first great, gut-punch drama of 2021 is here.