There are no berets, no Emily in Paris chintz. This is just watchable, witty French television 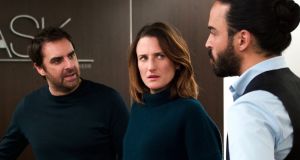 The moral centre of the action is Andréa, played by Camille Cottin

The world is divided between those who have never heard of Parisian comedy Call My Agent! (Netflix) and those who will proclaim it the best thing since hot, buttered croissant.

With a swanky showbiz agency overlooking the Louvre as the setting, this sleeper hit on Netflix is a gorgeous French fancy of a show: one moment dry and understated, the next melodramatic, uproarious and slapstick-fun. It is very French, very contemporary and very watchable.

There’s a gimmick, too, pinched without embarrassment from Curb Your Enthusiasm and Ricky Gervais’s Extras. Each season, the harried employees of Agence Samuel Kerr, or ASK, must wriggle into the good books of a real-life client. Enter a hit-parade of celebs playing exaggerated versions of themselves, among them Juliette Binoche and Monica Belluci.

The show’s fourth and final series raises the ante by featuring Sigourney Weaver, Charlotte Gainsbourg and Jean Reno. Of the three, Gainsbourg is the funniest, revealing a gift for understated comedy as she is suckered into participating in a terrible sci-fi film with the potential to ruin her career.

The A-listers, though, aren’t nearly as interesting as the flailing flacks rushing around doing their bidding. As with previous seasons, the moral centre of the action is Andréa (Camille Cottin). It was she who encouraged Gainsbourg to sign up to the aforementioned sci-fi flick, having neglected to read the (dreadful) script. That’s because she’s trying – and increasingly failing – to balance a demanding work schedule with the responsibilities of parenthood.

Andréa must extract Gainsbourg from her slow-motion disaster (in which she is required to don baking-foil space armour and a rubber third arm). Alas, her client refuses to confront the director, who is a friend. So Andréa encourages Gainsbourg to fake a broken leg. And then things really go off course.

He has a long-shunned love-child daughter, Camille (employed at ASK), and has to be pointedly asked to hand back his office key following his exit from the agency. It’s an adieu with the potential to plunge the company into crisis: with Mathias gone, how many clients will stay?

Paris shimmers in the background, but, as Call My Agent! is made for a domestic audience (in France it is known as Dix Pour Cent), it doesn’t shove its Gallic chic in your face. This is the real City of Light – not the chintzy Emily in Paris version. (There are no berets.)

And Call My Agent! is an irascible helping of French charm that twinkles with irreverence and wit.