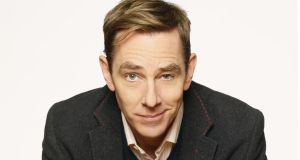 Sounding as effortless as Tubridy does isn’t as easy as it seems.

If the first casualty of war is truth, as the old maxim insists, so Ryan Tubridy thinks the pandemic is responsible for the demise of another abstract concept. “Small talk is dead,” the host declares on Monday’s Ryan Tubridy Show (RTÉ Radio 1, weekdays), blaming the restrictions on everyday life for this development. “Small talk has died because we just haven’t enough to talk about,” he elaborates. “I challenge anyone to do it properly now.”

The demise of aimless chit-chat may be of minor import for most people, but for Tubridy it’s a bigger deal, as much of his amiable patter is built around the pondering of factoids and ephemera. But you don’t get to be RTÉ’s highest paid personality – earning just under €500,000 a year in 2017-2019 – by lying down in the face of adversity. As Inspector Clouseau memorably put it: “The greater the odds, the greater the shallenge – and, as always, I accept the shallenge.” Sure enough, Tubridy picks up the gauntlet, and proceeds to pack his monologues with even more trivia than usual.

When on form, Tubridy presides over an oasis of diversion and entertainment amid the current-affairs menu that otherwise dominates Radio 1’s morning schedule

He starts promisingly, expounding on the pandemic-induced sartorial trend of “hate wear” and “sad wear”, before wondering how often bed linen should be changed.

As the week progresses, he really hits his stride. On Wednesday, his mood pepped by the arrival of “the new sheriff in town”, aka the about-to-be-inaugurated US president, Joe Biden, the presenter muses on which foods make people happy, listing coffee as his personal favourite. He goes on to do an impression of a coffee maker, before decrying the quality of the beverage from the machine in Radio Centre.

Tubridy also recounts the cookery programmes he’s been watching, for the foreign locations rather than the food. He’s “not really a foodie”, he continues, but he is a fan of dark chocolate, though he didn’t like it until he was 41 years old. And so it continues in this vein, for 20 well-remunerated minutes or so. Truly, reports of idle chatter’s death are premature.

But, somehow, Tubridy’s spiel doesn’t drag. If anything, the subatomic weightlessness of his subject matter adds zip to proceedings, allowing him to riff irreverently on themes. Oddly, this approach highlights his ability as a broadcaster: sounding this effortless isn’t as easy as it seems.

Tubridy’s light touch is evident elsewhere. His interview with the actor Adrian Dunbar deals with matters such as the impact of Covid-19, and Ireland’s French connections in the wake of Brexit, without ever deviating from an enjoyably chatty tone. Similarly, a conversation with the Mayo teacher Chuck Dunford is saved from filler status by the host’s rapport with his guest, who talks about his unconventional career path as well as parental bereavement. (By way of full disclosure, I need to mention that Tubridy also makes several kind comments about my father, Seamus Heaney, throughout the week.)

None of this adds much heft to the show. But Tubridy nonetheless fulfills an important public-broadcasting role. When on form, he presides over a welcome oasis of diversion and entertainment amid the current-affairs menu that otherwise dominates Radio 1’s morning schedule. Such small talk costs big bucks, however.

It’s bizarre to hear Joe Duffy converse with John Bolton, the US political heavyweight, in the same polite vernacular he adopts for callers with more prosaic stories

Tubridy isn’t the only person happy at Biden’s inauguration. Matt Cooper, host of The Last Word (Today FM, weekdays), has a spring in his step as he opens Wednesday’s show. “Things change for the better from today,” he says, before characteristically adding a tempering caveat: “Will they?” It’s a question Cooper puts to the former FBI chief James Comey, who was fired from his post by Donald Trump.

Comey’s mood is one of relief and optimism – “I feel like the sun is about to rise,” he says – though he’s concerned the threat posed by right-wing extremists “radicalised” by Trump’s falsehoods about a stolen election. “A healthy part of democracy [is] that you believe your leaders, except when your leader is a sociopath.”

Unsurprisingly, Comey is excoriating about the outgoing president, referring to his White House as “the eye of Sauron”. But the former law official is against prosecuting Trump, preferring to bar him from office than risk a trial that places him centre stage again. Either way, the conversation should make the listener grateful that Trump has exited the Oval Office.

Cooper also confers with his two regular pundits on US politics, the journalists Marion McKeone and Cal Thomas, who reliably split on left/right, Democrat/Republican lines. Thomas is alive to Trump’s flaws, calling him a “narcissist”, but is sceptical about Biden’s plea for unity, saying that Democrats have always failed to compromise with conservatives on issues such as abortion.

Cooper initially takes a hands-off approach to Thomas’s assertions – “As I’m in a good mood I’m not going to argue with you” – but eventually points out that Trump was “deliberately divisive”, in contrast to the new president.

McKeone, meanwhile, feels that “it’s always the Democrats who have to compromise” while Republicans remain intransigent.

As is their custom, McKeone and Thomas’s disputations are polite, but their political positions appear hopelessly incompatible. For all Cooper’s good mood, it’s a glum omen.

But leave it to Liveline (RTÉ Radio 1, weekdays) to have the most memorable take on Trump’s legacy. It’s not that the views expressed are particularly unusual, rather it’s the incongruity of Joe Duffy talking to John Bolton, Trump’s former national-security adviser.

A conservative foreign-policy hawk, Bolton is blunt about Trump’s shortcomings – “He went into the office not being fit for the presidency, and he comes out of the office not having learned a thing” – but thinks his stature will diminish: “Critics and supporters have been vastly overestimating the amount of influence he’s going to have.”

All this is insightful and even hopeful. But it’s not nearly as bizarre as the spectacle of Duffy conversing with this political heavyweight in the same polite vernacular he adopts for callers with more prosaic stories, right down to calling him “John” at every turn. Big issues or minor dramas, it’s all talk to Joe.

Sean Moncrieff has always enjoyed monkeying around in search of exotic topics, but he takes matters to extremes on Tuesday’s Moncrieff (Newstalk, weekdays). First, he talks to the psychology lecturer Jean-Baptiste Leca about his study that finds macaque monkeys in Bali steal non-edible items from tourists to exchange for food: barter, in other words, though Moncrieff prefers to frame the behaviour as a “ransom demand”.

It’s an interesting item shedding light on simian intelligence, but his discussion with Jonathan deBurca Butler is less edifying. Moncrieff hears how a circus in Russia is being investigated for dressing up monkeys (and goats) in Nazi uniforms. The circus excused the actions by pointing out that the ringmasters were dressed in Russian uniforms, thus metaphorically humiliating the Nazis, while actually demeaning the animals. Either way, when it comes to monkey business, Moncrieff is the primate of Irish radio.