Look, there’s Mark Ruffalo and Amy Adams. Even Chris O’Dowd. And a lot of celebrity warbling 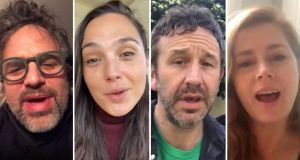 The world owes Gal Gadot a debt of gratitude that it – the whole world – can never hope to repay. The video of her and various celebrities warbling their way through John Lennon’s Imagine has done more to bring us together than any other communication in the current crisis.

This really is the “I have a dream” moment. It’s the “fight them on the beaches” fulcrum. The near-uniform chorus of ridicule speaks powerfully to the common values shared across all cultures and nations. Type Ms Gadot’s name into Twitter and before you get to the “d” the search has been completed to “Gal Gadot cringe”. Nicely done, people.

If you haven’t seen it yet then… Well, good work. There are so many less painful ways of spending life in isolation. You could retrieve that spoon from the waste disposal without turning the device off. Your head isn’t going to slam itself repeatedly in the fridge door. Get on it.

The Instagram video begins with Ms Gadot, best known as Wonder Woman, noting that she is spending her sixth day in smug self-quarantine. Like many others, she has, apparently, been watching those videos of Italians keeping their neighbours awake by yelling opera or blowing loudly through trumpets.

She got “a bit philosophical” after hearing one of the brass musicians play Lennon’s most fraudulent song and phoned up other confined celebs to forward a scheme that had no possibility of failure. Who wouldn’t be cheered by confirmation that chatshow hosts and pop stars isolate in palaces while we eat cold beans in squalor?

Gadot corralled an impressive array of A-list talent. It would be reassuring to dismiss them all as “usual suspects”, but, if you like any famous people, then you’re sure to like somebody here. The activist, actor and Hulk Mark Ruffalo is there in close-up. The serial Oscar snubee and all-round nice person Amy Adams hits the right notes with “I’m not the only one”. Indeed, she isn’t. There’s Natalie Portman in the garden. Chris O’Dowd and Dawn O’Porter have also gone alfresco for “I wonder if you can”. Will Ferrell looks to be in the sock closet for “No need for greed and hunger”.

Almost everyone seems to be taking the project painfully seriously. One possible exception is the admirably cynical Sarah Silverman, who, standing near an exterior staircase, makes a bad-smell face while vocalising one of the “ooo-hoo” bits. I will do her the service of taking this as implicit acknowledgment that there’s no way this is going to come off without derision.

The song itself is an issue. For close to 50 years, even those who admire Imagine – a compilation of platitudes layered over a sentimental lullaby – have raised eyes at the notion of a millionaire musician fantasising about having “no possessions”. (The famous video played out in an empty room, but that room was within an enormous home-counties mansion.) Add already widespread weariness at videos of celebrities, temporarily inconvenienced by Covid-19, being awfully brave in Bourbon splendour and you have an equation that can’t be satisfactorily balanced.

The awful thing suggests the possibility of a new fundraising entity: the charity single as threat. Send €50 to this address or we’ll reconvene for an assault on Leonard Cohen’s Hallelujah or Coldplay’s Fix You. There’s only one answer to that demand. Good causes profit and nobody has to watch James Corden doing the “David played, and it pleased the Lord” bit. Just a thought.