TV review: Taking Control, on the BBC last night, was both absorbing and unnerving 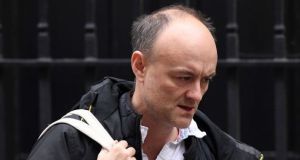 Political advisor Dominic Cummings has been making dramatic exits through his 25-year career as a challenger of orthodoxies, demolisher of the status quo and sledge-hammer in the face of accepted wisdom. File Photograph:

Chaos in Britain over Covid-19 suggests Boris Johnson’s first real test as prime minister is not going as swimmingly as he may have fantasised when, back in his Eton days, he dreamed of one day being “world king”. So it’s a felicitous moment for Taking Control: The Dominic Cummings Story (BBC Two). How much control is possible when confronted by a once-in-a-century global contagion?

As it happens there is some (presumably hastily) tacked-on coronavirus, also known as Covid-19, stuff at the end of this absorbing, if unnerving (from a UK perspective), documentary, presented by Newsnight’s Emily Maitlis. “Is the British approach to the coronavirus right?” shouts a journalist at the prime minister’s chief adviser as, shirt untucked and scarf pointing in six directions as per his image, Cummings exits his house.

“I can’t talk to you guys today,” is the response and then he’s gone. So that’s reassuring.

Cummings has been making dramatic exits through his 25-year career as a challenger of orthodoxies, demolisher of the status quo and sledge-hammer in the face of accepted wisdom. In the 2000s, a dream job advising hapless Conservative leader Ian Duncan Smith ended prematurely when Cummings proclaimed the Tories even less popular than British membership of the Euro. Which was true – but still a bombshell to the Conservatives.

He was shut out all over again as Prince that was Promised David Cameron became prime minister at the head of a Conservative-Liberal Democrat coalition in 2010.

Cummings, though, refused to take his beating or go quietly into the night. He fought on and rebounded. Ten years later, he is understood to be one of the most influential figures in Johnson’s government. The power behind Good King BoJo’s huge inflatable throne.

The slight difficulty is that all of this already widely understood. Thus, Maitlis’s documentary doesn’t meaningfully add to our knowledge of Cummings, his worldview or what we can expect from the UK government as the coronavirus crisis spirals. Instead it functions as crash course in his life and times. If entertaining – and heaven knows we all do with some distraction – it is hardly essential.

Of all Cummings’ escapades, it is those that took place during the heyday Tony Blair and New Labour that feel most revealing. A boyish Cummings was part of the campaign to keep Britain out of the euro. One of its big stunts was to draw a misleading equivalence between the cost to the British taxpayer of joining the single currency and that of running the NHS. The stunt clearly worked and was reprised for the Brexit vote in the form of the £350 million battle bus.

Also explored is Cummings’ uncanny ability to look into the heart of the average punter and tell them what they need to hear. This first came to the fore during Blair’s failed 2004 referendum to establish a regional assembly for the North East of England. The “no” campaign was gloves-off populism: one gimmick involved burning specially printed “politician’s money” at Cummings’ family farm in Durham.

The message the stunt sought to communicate was that all Blair and his cohorts were after was an opportunity to line their pockets by creating another layer of public representatives. “Classic Dom” worked his magic. The referendum suffered a landslide defeat.

Amidst the Machiavellian murk glimmer several especially disquieting nuggets. Journalist Peter Oborne recalls a lunch at swanky Santini in Belgravia at which Cummings warned of a “tribal movement” of people from “east to west”. “It was the word tribal which hit me,” remembers Oborne. “This was something outside: “tribal”, hostile” even.”

Even more astonishing is pro-euro businessman Colin Perry’s recollection of being jostled and then roughly seized by Cummings. This came after a volatile on-air exchange regarding the single currency

“What he actually wants to do is set up the Avengers,” says former Spectator editor Matthew d’Ancona. “What I see is a populist prime minister aided by populist advisers hell bent on achieving what they set out to by any means necessary. It’s populism in its purist form.”

Even in normal times, this would be a perturbing assessment. With a pandemic raging, many in the UK may understandably consider it alarming.

The Translator’s Funeral, a new short story by Rónán Hession
6

Maura Higgins: ‘I really hated it. Apart from that massage, the rest of it can kiss my ass’
8

Welcome to Sligoville: The story of the Irish in Jamaica
10