Martin Freeman: ‘I’m not nice, not your best mate. I’m angry and a bit superior’

In Breeders, the Office and Sherlock actor has created a dark comedy about parenting 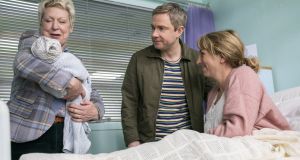 The idea of Martin Freeman’s new show Breeders first came to him in his sleep.

“In nice sort of lefty, liberal circles, you don’t really talk about how you want to throw your kids out of the (expletive) window,” Martin Freeman said. It was a gloomy Friday in early fall. In a few hours, Freeman would meet his own kids, then 11 and nearly 14, for a weekend of “probably just eating and kicking a ball around and normal, boring stuff,” he said. But at that moment, he had arranged himself on a plush sofa in a private lounge of a ritzy hotel in a luxury corner of London’s Soho neighbourhood. Between tidy bites of Dover sole, he told me how bringing up children, especially very young children, had often made him want to put his fist through a wall.

“It’s just hard,” he said. Minutes later, he elaborated: “You feel like you’re in a little prison, actually, and going mad.” Freeman (48), the English star of Fargo, Sherlock and Peter Jackson’s hobbit films, has applied that madness in Breeders, the tar-black comedy that he co-created and stars in, which premieres on FX on Monday. He plays Paul, a London man married to Daisy Haggard’s Ally and blessed with two children, Luke (7), and Ava (4).

“I would die for those kids,” Paul tells his wife in the pilot. “But often I also want to kill them.” “It’s a conundrum, isn’t it,” she says, “trying to work out which duvet to suffocate them with.” Breeders joins recent Anglophone comedies like Catastrophe, Motherland, Workin’ Moms and The Letdown in its focus on the relentlessness of modern parenting. It also shows Freeman, an actor known for playing nice guys and the occasional nice hobbit, loosing the anger that he usually keeps coiled and letting his rage flag fly.

For Freeman enthusiasts, this might seem jarring. What’s a nice guy like him doing with wrath like this? But Freeman isn’t especially nice. Which he knows. “I’m angry,” he said, with typical candour. “And a bit superior.” His characters are, too, even seemingly benign ones like Tim in the British version of The Office, who defaults to contempt, or John Watson in Sherlock, who struggles with post-traumatic stress. (And yes, I asked him if he would ever make more Sherlock episodes. His answer: “Is that still on?”) Lift the rumpled hood and Freeman’s nice guys aren’t really nice at all.

“People just thought I was their best mate,” he said. “I’m really not. I’m not your best mate. That was always a shock to people.” Which suggests that his Breeders character is less outlier than alter ego. When I asked how he differed from Paul, he thought for a bit. “I think he’s probably less of a (expletive) than I am,” he answered, using a very English obscenity. Freeman, who wore desert boots, cuffed jeans and an indigo chore coat, also said that he thought he dressed better than Paul. Fair.

Over lunch, Freeman alternated the occasional rant with acute self-awareness. He spoke much more frankly than most actors do, with brains and wit and the occasional joke so appalling that I could hear myself, when I listened to the recording of the conversation later, laughing in a way that bordered on hysteria.

Breeders began with a dream – an actual dream, a dream that felt a lot like life. In the dream, his children were making some terrific ruckus, and as Freeman walked upstairs to quiet them, he told himself not to yell at his children, that it wouldn’t help, that it would only make him feel worse. Then he yelled anyway.

The next morning, he told his then-partner and Sherlock co-star, actress Amanda Abbington (they split in 2016), that he thought it would make good material for a very dark comedy. He had seen other shows about parenting, like the BBC’s Outnumbered. And as he watched them, he told me, he used to wonder why none of the parents “were ever threatening to break someone’s nose.”

“Because if you’re constantly, constantly, constantly being disobeyed, someone’s going to threaten to put someone through a wall,” he said. “And that’s real life.” Is it though? I and most other well-meaning humans might wonder. Freeman knows how he comes across. “None of this is going to sound good on paper,” he said. “None of my interviews ever do.” Let’s be clear: Freeman does not, he would like you to know, condone child abuse in any form. He has never raised a hand to his children; he doesn’t think that anyone should raise a hand to a child. Windows? Walls? Absolutely not. When he realised he was yelling too much at the people he loved most in the world, he went to therapy and it helped.

But the point is, he wanted Breeders to reflect his own authentic parental frustration, not some TV version. Speaking by telephone, Simon Blackwell, the series’ showrunner (and, with Chris Addison, another creator), described early creative meetings as “kind of a men’s therapy group,” with an emphasis on shared failures as parents, on the distance between the fathers they had wanted to be and the fathers they were.

The writers’ room was staffed entirely with parents. The show, as Freeman said, with expletives, “has to be shot through with the truth of what it is to be a parent, what it is to love that much and to be that angry and to be that tired.” Freeman’s most common script note: Make it less funny. Which the writers did, knowing that the actor’s tousled charm would soften a character who isn’t particularly soft, creating empathy Paul may not deserve.

“I’m not nice,” Paul says in that first episode. “For 30-odd years I was convinced I was nice. But I’m not. I’m nasty.” Fatherhood taught Paul that. It taught Freeman that, too. Still, what the actor candidly, maybe even too candidly, describes as personal shortcomings, his colleagues frame as byproducts of a fierce intelligence and dedication to craft, which can sometimes manifest as impatience. Haggard, his Breeders co-star who brought her breast pump to auditions, described him as rigorously honest. “You get to the nitty-gritty, you don’t float around on the surface being polite about everything,” she said. The writer-director Steven Moffat, who cocreated “Sherlock,” called him “sharp” and “very authoritative” and “nobody’s idea of a pushover.”

“I think he occasionally gets a bit cross that he is constantly cast as the Everyman,” Moffat said. “Because he doesn’t really feel that he’s much of an Everyman, and he’s right.” It’s that tension between the wonky-smiled, friend’s-kid-brother looks and the suspicion of something more volatile that informs his best work. “Martin is perfect doing the ordinary man with simmering undercurrents,” Moffat said. That’s why Noah Hawley cast him as Lester Nygaard, the milquetoast turned murderer who leads the first season of Fargo. “That reserve of anger is interesting onscreen,” Hawley said, speaking by telephone. “You’re waiting for it to come out.” In Breeders, that reserve is there from the get-go. In the pilot’s first scene, adapted from Freeman’s dream, Paul screams at his children in a way the character describes as “medically deranged.” Freeman looks as if he isn’t acting – that may be because Breeders borrows so explicitly from his own experience, or because looking like he’s not acting is one of his things.

“I don’t want to see the [expletive] work,” he said. “Because that just looks like you’re trying to win an award.” It doesn’t mean he takes the work lightly. Hawley mentioned that he stayed with his Minnesota accent throughout the Fargo shoot. Moffat, who said that Freeman verged “on national treasure status,” put it like this: “He’s terribly serious about his work. I mean, when he’s working, he’s working.

And on Breeders he really is working, because a character like Paul – pre-therapy, eternally at tether’s end – hews closely to the man Freeman used to be, not the man he is now. His separation from Abbington, whom he describes as “wonderful” and “a brilliant [expletive] actor,” means shared custody, so he spends less time with his children and values that time more. He looks forward to their “normal, boring” weekends.

“Boring and lovely,” he clarified. “I don’t deny the dark side of it,” he said, and starring in a show like Breeders means he can’t. But “the lovely side of it is just great.” Put another way: He doesn’t want to throw anyone out of the [expletive] window. – The New York Times

The series premieres in Ireland on Thursday, March 12th at 10pm on Sky One