I’m seeing someone else. She’s called Heidi and has eight legs

Review: Divorcee and scientist David Scheel has formed a unique bond with his pet octopus 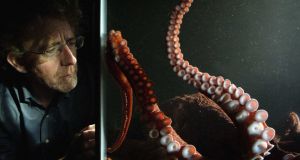 David and Heidi: Octopuses can use tools, recognise faces, hold grudges, and use an iPhone

David Scheel is the kind of man who takes his work home with him. Given that he is a professor of marine biology, who, for the past 25 years, has specialised in the extraordinary world of octopuses, such a preoccupation is likely to make a splash.

So much so that you barely blink when, ahead of installing a humongous salt water tank in his living room, he merrily admits, “I got divorced and the ex took some – actually most of the furniture.”

That Scheel’s relationship with Heidi – a lively cephalopod and “Day Octopus” – will be intimate is apparent from the first shots of Anna Fitch’s documentary The Octopus in my House (BBC2, Thursday, 9pm). It opens with a low-lit scene of mutual regard across glass barriers, where Heidi seems to be either caressing Scheel’s face or cleaning her windows.

Charming, angular and geeky, Scheel strikes you as a genetic splicing together of the body of Donald Sutherland with the voice and attitude of Wallace Shawn.

Inscrutable, squidgy and twirling through more colours than 4K HDTV technology can handle, Heidi seems like exactly his type. Scheel muses about “the nature of the relationship I might have with such a creature”. Steady on, man. You hardly know the mollusc.

“I’m not trying to do science here,” Scheel reasons, “I’m just trying to think a bit.”

Heidi’s role in the programme, then, unconventional as the set-up appears to be, is to illustrate a lesson in cephalopods, which entails an awed review of the evolution of so alien and intelligent a species. Octopuses can use tools, recognise faces, hold grudges, and, as we see here, use an iPhone and watch David Attenborough. The latter, Heidi probably thinks of as a soap opera.

“But to what extent is she watching us?” wonders Scheel.

It’s hard not to imagine that, if Heidi is watching, she may be a little disappointed, waiting patiently to witness a new discovery in the mysterious world of her species, but finding, in her professor’s lonely fixation, a more revealing kinship between solitary creatures.

These weird beings, she thinks, with their touching capacity to project feelings on other species and their pitifully small quota of arms. How did they get that way?