Ciara Kelly: ‘I can see many reasons not to vote for a united Ireland’ 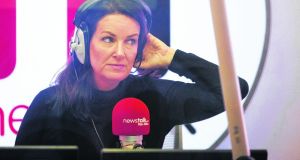 After years of silence on the matter, the possibility of a united Ireland is, so to speak, a conversation once again.

But even as Brexit has overturned economic certainties and realigned allegiances to the point that the Taoiseach is talking about unification as a credible scenario, there remains one part of the island where the idea remains anathema.

Presenter Ciara Kelly neatly sums up the credo of this stubborn rump, which has long viewed an all-Ireland state as inimical to their interests and identity, when she asks, “Does Leinster say no?”

Judging by Wednesday’s Lunchtime Live (Newstalk, weekdays), it would appear so. Not only does Kelly hear several callers from Leinster (and across the Republic) express doubt about the merits of reunification, but she appears to share them. “I can see a huge amount of reasons not [to vote] for a united Ireland,” she says.

These reasons include many familiar factors, from the crippling financial costs of a region that receives billions in subsidies from London to the prospect of unionists disrupting the Dáil. “Nobody wants them as a thorn in the side,” Kelly remarks.

She also ponders whether identity in the Republic is different to that of northern Catholics, who have “grown up in a British state”. The presenter speaks of “cultural differences” between southerners and “our northern brethren”. Residents of the Republic “don’t care if someone is Catholic or Protestant”, she claims, whereas the North hasn’t “put the Troubles behind them”.

One caller, Michael, is wary of such romantic nationalist baggage: “My own generation just wants to get on with things.” Kelly, meanwhile, candidly describes her mentality using an older, more charged, term: “partitionist”.

All of these are pertinent points, but they aren’t always clear when one listens to Kelly’s show, which has morphed into a phone-in programme interspersed by punditry and lifestyle items. Callers meander, quoting random facts and basing arguments on shaky grounds.

This is, of course, an occupational hazard with the phone-in format, but whereas programmes such as Liveline mainly draw on callers’ experiences, Kelly instead solicits opinions – “Tell me what you think.” This can make for frustrating and tendentious listening.

Kelly, meanwhile, is so keen to hear what her listeners think that she spends much of her time urgently reeling off questions about the topic at hand. After a while this bombardment of hypotheticals grows tiring, especially when the answers are so vague. At least saying no gets to the point.

As if to underline that the idea of reunification is back in the ether, the topic is also discussed on Wednesday’s edition of Drivetime (RTÉ Radio 1, weekday), albeit as part of the wider and even knottier issue of what Irish identity actually is.

Presenter Mary Wilson hears from a variety of voices, none of whom, interestingly enough, come from south of the Border. Unsurprisingly, the thrust of the discussion is different from that on Kelly’s show.

Wilson’s guests include Nick Mazzei, a former British soldier who became an Irish citizen after the UK’s vote to leave the European Union. (He recently wrote about this in The Irish Times.) Mazzei explains how he has embraced his Irish identity as much for what he believes it represents – values of openness he feels are being lost in post-Brexit England – as for the country itself.

It’s a theme taken up by his fellow guests: Emma de Souza, who has battled the UK Home Office over her American husband’s residency, and legal commentator Patricia McBride. For these women, both Derry natives, national identity encompasses both those of Irish ancestry and people who have made their home in Ireland rather than the place itself. For McBride, the key thing is “not the physical space but the community”.

Wilson, as incisive a moderator as she is unsentimental, inevitably steers the conversation towards reunification, asking whether Irishness, for all the aspirational talk of inclusivity, is exclusive when it comes to accommodating unionists.

Far from seeing unionists as potentially unruly force, McBride is alive to their sensitivities, believing that their British identity would be as strong in a united Ireland as her Irish identity is while living under UK rule.

It’s a thoughtful, stimulating conversation. But even as Wilson and her guests wonder what would need to change in an all-Irish state – even the term “united Ireland” is contentious, de Souza notes – it’s hard to avoid the feeling that such admirable idealism will run aground on the rocks of fiscal fear and cultural suspicion.

Drivetime listeners seeking escape from such matters can find it in an actual shipwreck. A riveting piece of investigative reportage, Philip Boucher-Hayes’s weekly series for the show also has enough twisty intrigue and swashbuckling action for a 1930s film serial or Boy’s Own story, right down to its title, Treasure Island: the Hunt for Falcon Blanco.

The eponymous vessel, part of the ill-fated Spanish Armada of 1588, sank off the west coast of Ireland, where it rested until it was apparently discovered by frogmen off Inishbofin in 1969, though even this is a subject of dispute.

His interest piqued by a meeting with one of the divers, Boucher-Hayes sets out to uncover the truth and search for the wreck. Along the way, he encounters a colourful cast of characters including shadowy civil servants, unscrupulous salvage hunters and ruthless Elizabethan nobles, while enduring a harrowing scuba dive of his own.

It’s recounted with laconic detachment and an eye for dramatic detail: he relishes phrases such as “piles of gold ducats”. But even Boucher-Hayes can’t avoid old tribal faultlines when he describes the Armada’s dispersement by a storm off England in evocative style: “The Catholic fleet got pushed north up the channel by a Protestant wind.” More than 400 years later, those differences have yet to blow over fully.

Radio Moment of the Week: In touch with one’s felines

The summer slump means Liveline (RTÉ Radio 1) is even more bizarre than usual. On Tuesday, Joe Duffy hears from a woman who claims her cat was killed after being used to blood greyhounds for coursing. This grim tale prompts some unpredictable responses. John, a Dubliner from central casting, tells how his cat, Stripey, was so alarmed by fireworks at a Westlife concert that he ran into the path of a car. Thankfully Stripey survived, though John is miffed at the inadequacy of a leaflet warning about the fireworks: “Cats can’t read,” he says ruefully. Faced with such quirkiness, Duffy gets arbitrary himself. “Where do cats go to die?” he asks. Even John sounds bemused. “Jaysus, I don’t know.” But it’s killer radio.