Damien Molony: from Kildare to the top of British TV

From love interest in GameFace to sensible friend in Brassic, Molony’s technique is to stand out 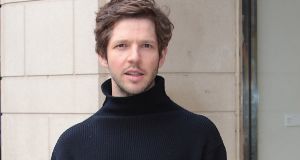 Damien Molony was reared in Kildare, the son of a doctor and a solicitor-turned-travel guide. 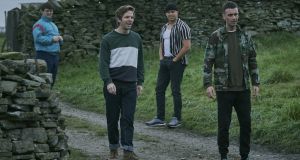 The upcoming comedy drama Brassic follows the capers of disenfranchised lads from the north English countryside.

Almost obscured by a multi-directional mane of shaggy hair, Damien Molony’s eyes light up when he describes how much he loves fighting. Not in alleyways, nor against thugs – but in the more refined setting of the theatre. He’s a calm presence by default, but is injected with enthusiasm as he recalls the last time he appeared on stage in 2017, in a King Lear production in Chichester alongside Ian McKellen, no less.

“I had a fight scene at the end of the play that nearly destroyed me,” he says, more proud than pained. “We did eight shows a week, and after a double-show day, I’d lie in bed until 3pm the next day, just aching. But it was great fun. When you’re playing with knives and swords, it feels like you’re getting paid to be in primary school again.”

He caveats his words. “Not that we had swords in primary school . . .”

It’s all in a day’s work of an actor, especially one who has stepped from project to project with little pause between. Flitting from vampiric shenanigans in Being Human to joining Ripper Street as a Victorian constable to flying to Jordan to play a hired gun in Tiger Raid, there doesn’t appear to be a dull day in his world.

Molony’s most recent project, as the love interest in Roisin Conaty’s GameFace, is among his most realistic characters. But the upcoming comedy drama Brassic, ostensibly the reason we meet today in a London cafe, gives rise to a whole new set of wild situations.

We got up to the most ridiculous things every single day

The Sky series follows the capers of disenfranchised lads from the north English countryside. Their MO is to “have their mates, have a laugh, and find a way to survive”, to paraphrase the lead character of Vinnie, played by Joe Gilgun, who created the show based around his childhood. Molony plays his best friend Dylan, who tries to be the sensible one of the group, but is easily led astray.

“We got up to the most ridiculous things every single day,” Molony smiles, remembering the three-month shoot at the end of last year. “No day was ever the same. It was either a car chase or we were running into a field running after a Shetland pony, or getting shot at.”

Yet underpinning their capers are weightier themes, which are explored with heart. It’s a look at male friendships as each try to make the best of their lot and, like Gilgun himself, Vinnie has bipolar depression, so the realistic depictions carry extra gravitas.

Co-stars include Dominic West (best known for The Wire) as Vinnie’s amusingly inept psychologist, Michelle Keegan as Dylan’s girlfriend, and Aaron Heffernan, who we might also recognise from Love/Hate. While he shifts his Irish accent to play a Traveller, Molony adopts a shiny new Lancaster brogue as Dylan.

“I got the accent by listening to Joe,” says Molony. “Really listening. He tells stories on set at a mile a minute, so you’re constantly given a very good sample voice on who to base it on.”

“I spent so much of the first series in the car, people wondered if I had legs,” he smiles. “So it was lovely to be out of the car this time around, and navigate this awkward love story. Roisin did such an incredible job of making it human. I think the show is so popular because everyone can relate to the things that she’s going through.”

Impressively, it’s not the first time he’s played the frisson-filled love interest in a comedy drama opposite the woman who’s written it – most likely because of his killer combo of charming looks and relaxed demeanour. Back when Fleabag was still progressing from stage to TV, Phoebe Waller-Bridge’s Crashing was her first move into masterminding a TV show.

“Every time there’s a new headline about what Phoebe’s up to next, I’m so delighted for her. She’s an incredible talent and she’s getting her rewards,” he says.

“There has always been something very special about her. In the same way there is about Roisin. When you’re working with an actor who’s also the showrunner, like they did on the shows we worked on, decisions were being made all the time in my earshot. Being privy to that was inspiring.

“Like, if I was in their position and someone gave me script notes or production notes, I’d take them with thanks,” he says, and he’s such an amenable guy, I can believe that. “Whereas they’re like, ‘this is how it works, trust me, I know what I’m doing. Don’t mess with it.’ It’s brilliant to watch how direct and driven they are.”

Molony’s route into acting was only partly conventional: there are no other actors in the family, yet he knew from childhood that it would be his vocation “except I just didn’t know how. I thought you could turn up to the Abbey Theatre door and tell them you wanted a job.”

The son of a doctor and a solicitor-turned-travel guide, he enjoyed a comfortable childhood in Kildare, which involved usual kid-like pursuits like roaming the countryside and a spot of ghost-hunting with sticks (“because that would protect you from the ghosts obviously”).

He studied at Clongowes Wood then Trinity College, but soon moved to London to attend the Drama Centre, whose alumni include Michael Fassbender and Tom Hardy. But his is a journey of constant learning, especially as Molony’s technique to stand out is to offer the director an unexpected take on the role at hand, even if “sometimes it works out, and sometimes it doesn’t”.

It’s a point that was supported by Ian McKellen when they first worked together in 2016, in a less fight-filled production, Harold Pinter’s No Man’s Land.

“We did around 120 performances, and he did something different on every single show,” says Molony. “He said to me, ‘If you surprise yourself with a line, then you’re going to surprise the audience.’ So I try to take that onto every single job I do. If I do six takes of a scene and I do something slightly different every time, then the director and the editor have six different ways in which they can tell the story.”

Settled in London now, Molony is married with a two-year-old boy. His brother is a chef based in London too. It means that Brexit or no Brexit, he’s happy to stay for a while longer. “It will be a complete disaster if the UK left,” he says of the debacle. “But right now, the worst thing is the uncertainty.”

Has he befriended other Irish actors in the capital?

“I have met some on various jobs – like Aaron on Brassic – but I rarely go to events here so I don’t meet them,” he says. “Roisin brought me to the Irish Embassy for Bloomsday this year, and it felt like she was introducing me to the Irish set; people like Sinead Cusack and Niall Buggy were there doing readings, for instance.”

I watched the last episode with a glass of wine, and I loved the show so much I found out who the casting director was

Looking ahead, next February will find him in the second series of The Split, a female-fronted legal drama from the BBC, and one of his favourite shows.

“I watched the last episode with a glass of wine, and I loved the show so much I found out who the casting director was, and I emailed her in the middle of the night saying ‘If you ever make a second series of this, please, I would love to be in it,’” he says. Although she didn’t cast the second series, the machinations of the industry worked its magic.

“We finished filming it 10 days ago and I’m bereft. There were genuine moments of being on set, in the main family scenes with everyone, going I can’t believe I’m here. I had so much fun. I don’t know if they’ll squeeze me into a third series, but I made it so clear my last day that I’d like to be involved. The dialogue is just brilliant.”

It certainly feels as if his stocks have increased after a constant run of successful TV shows and high-profile theatre stints. I ask him if he’s noticed a shift in the type of scripts that come through to him, and he agrees it’s changed.

“I never really read for the big, battle-scarred action hero,” he grins. “But I am probably reading more now for the love interest. And that’s great. Some of my favourite films are How to Lose a Guy in 10 Days, and 10 Things I Hate About You. I love those romcom films, so it’s lovely be in similar things, and play against the inevitability of it all.”

There we have it then. Damien Molony: both a lover and a fighter.

Brassic will be available to watch from Thursday, August 22nd, on Sky One and streaming service NOW TV.

There'll be no Bauhaus in this White House
10