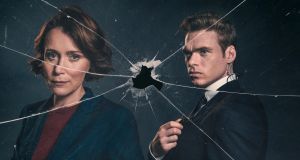 If there something familiar about how an utterly dashing British agent deals with danger in Bodyguard (Sunday, BBC1, 9pm), that may be more than accidental.

Our introduction to the protagonist of Jed Mercurio’s new thriller, played by grisly Game of Thrones Red Wedding offering Richard Madden, is to watch him foil a terrorist attack on his downtime, noticing all the warning signs of an incipient suicide bombing while chaperoning his children during a train ride.

Planning to eject the suspect the way Roger Moore once dispatched a baddie via a spacecraft’s airlock, he instead confronts a radicalised Muslim woman in a suicide vest and talks her out of her mission.

Although he claims to be afraid during the encounter, his cool composure never falters. It’s quite a cocktail, shaken but not stirred.

Budd is not a secret agent, though; he’s a police sergeant, and far from being impervious to peril, he is a former soldier whose experiences in Afghanistan have left hazardous psychological consequences, now lurking just below the surface like an IED.

When he is assigned, by way of promotion, as principal protection officer to the Home Office Minister, Julia Montague (Keeley Hawes), a hawkish and careerist Tory politician who never met a war she didn’t like, or a human she did, his fuse begins to ignite.

Mercurio, the writer behind the gritty police procedural Line of Duty, has a way of bringing psychological complexity to the more outlandish pleasures of the thriller genre, and Bodyguard slaloms happily between the two. Take the titillating moment that Julia has a wardrobe mishap just before a live television interview and David dutifully strips off his shirt, tailored to fit his Kevlar vest, suggesting “the chest to waist ratio should be compatible”.

The same goes for David and Julia, with their smouldering, combative, superior/subordinate sexual chemistry. “My job is to keep you safe, m’am,” he says during one unemotional tussle. “I don’t tell you how to do yours.”

The tension here is more than sexual. David’s estranged wife is genuinely afraid of him and hardly reassured by his reason for delaying a divorce: “If anything happens to me at work, you still get the pension.”

Julia ay not be the first politician to be diagnosed as a sociopath by her peers; but what of David, a man who endlessly replays her interview and its cold defence for warmongering at home?

The paradox of the show may be as obvious as its sexual subtext: can David protect Julia from his own darker urges? But the unease within it is very well realised, in a city with an elevated threat level, a London almost always shot at dusk, seething with distrust. What protection can there be when heroes and villains become harder to separate?

Even Budd, who starts out like Bond, seems to be blooming into his own Blofeld.

Facebook’s dirty work in Ireland: ‘I had to watch footage of a person being beaten to death’
7