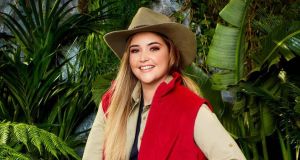 The sun has gone down on I’m A Celebrity … Get Me Out Of Here! 2019 (Virgin Media One), with ex-EastEnders actress Jacqueline Jossa walking away with the jungle crown.

Disappointingly said “crown” turned out to be a garland of cheap-ish looking flowers. It sat uneasily on her head at the end of Sunday’s final, in which she finished ahead of Coronation Street star Andy Whyment and Roman Kemp, radio presenter son of Spandau Ballet’s Martin Kemp.

There was no Irish representation in the decider. Nadine Coyle, very much playing the game of fronds and playing to win, had been a surprise elimination on Friday.

She and Caitlyn Jenner were booted out of the camp in a shock double-ejection. That wasn’t supposed to happen; Coyle had quietly placed herself among the favourites to triumph outright. The British voting public begged to differ, though. And so off she went across the rope bridge of despair for her exit interview with presenters Ant McPartlin and Declan Donnelly.

Coyle was focusing on the positives (the former Girls Aloud singer is set to capitalise on the exposure by releasing a pre-recorded new EP). As with every I’m A Celeb contestant, she proclaimed her stint in the jungle a delight from start to finish. She did also, however, admit it wasn’t all frolicking amid the vines.

“It was way crazier than I thought, and it was harder than I thought,” she said in her debrief, during which she mustered the good grace to laugh, a bit, at Ant and Dec’s howling one-liners. “When you go into the jungle you know it’s not going to be like staying in a hotel, but it was hard … but also enjoyable.”

She continued: “You get into this thing where you’re very in the moment, you get on with it or you crumble and fall apart – and that’s just with going in the bathroom, it’s horrible in there.”

Coyle grinned chirpily as she said this. Her body language was in contrast to that of the other Irish participant, Dublin comedian Andrew Maxwell. As second contestant eliminated, he truly looked as if he’d just staggered away the 12th circle of hell (you’d think he would be au fait with eternal damnation having appeared on Mock the Week).

His chief gripe was how boring it was (again..see Mock the Week). “You can’t speed it up ... “There’s nothing you can do,” he told Ant and Dec. “Those hours are going to be there. Either sleep it off, fill its with conversation or count the trees.”

Now he’s out he can instead occupy himself counting the €60,000 he is estimated to have earned. Nadine will be spending quality time with her remuneration too. She is estimated to have trousered €275,000 for her three weeks under the canopy. With a juicy jungle jackpot like that you’d have laughed at Ant and Dec’s jokes too.

This article was updated on Monday, December 9th, 2019, to clarify Roman Kemp is the son of  Martin Kemp, and not Gary Kemp as originall stated