Defiant farmers cause 4FM presenter to drop the F-bomb, but his shock jock instincts remain 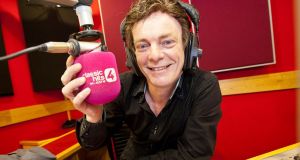 One of the symptoms of our polarised times is that figures who might previously have been seen as extreme now appear as voices of reason.

Think of the lamentations that followed the resignation of James Mattis from Donald Trump’s cabinet, on the basis that a former Marine general nicknamed “Mad Dog” was one of the “adults in the room” restraining the US president.

A similar sinking feeling can be felt on Wednesday’s edition of The Niall Boylan Show (4FM, weekdays) when the presenter, an on-air provocateur in the way an arsonist likes to play with matches, finds himself in an unusual position, namely occupying the centre ground.

The occasion for this unexpected moderation is the farmers’ protest in Dublin. This subject unsurprisingly yields a rich seam of outrage, the fossil fuel on which Boylan’s show depends.

With reporter Robbie Kane his interlocutor on the ground, the host speaks to Michael Fitzpatrick of the Independent Farmers of Ireland, one of the groups behind the disruptive tractor protest.

Fitzpatrick speaks passionately, if not always coherently, about the low prices paid by beef processors, and the injunctions against farmers who picketed processing plants.

“If we stop producing food, the country would be in trouble in three days,” he adds, in what sounds suspiciously like a warning.

Boylan sympathises with the protesters’ aims – “I agree with the point of your protest” – but suggests that closing down large sections of the city centre risked losing support for the protesting farmers.

To bolster this viewpoint – and let’s face it, to get a bit of argy-bargy going – the host also talks to Dublin City Councillor Nial Ring, who urges the protestors not to cause a rural-urban rift with their actions: “You have to care for the people of Dublin”.

But Fitzpatrick is no mood for compromise, threatening to stay put for eight weeks and putting the onus on Minister for Agriculture, Michael Creed. “The blame is on him,” he says.

This is too much even for Boylan, who becomes so frustrated that he uses the one four-letter word that’s taboo on his show.

“I’m trying to be fair,” the host says, dropping an unprecedented F-bomb. “I’m trying to be in the middle.” If Boylan sounds mildly surprised at this development, he shouldn’t be. In enthusiastically encouraging people to vent on both real problems and pet peeves, the host walks a fine line between airing grievances and fuelling resentment. Financial inequality and simmering indignation may make for attention-grabbing radio, but it isn’t a formula for a healthy society.

Not that Boylan has been transformed into a social justice activist, not in the conventional sense anyway. He also interviews former Young Fine Gael president Killian Foley-Walsh, who attracted a barrage of criticism earlier this year when he attended a right-wing youth conference in America. Boylan, who says he’s one of the few people who “stood up” for Foley-Walsh, hears how his guest was so adversely affected by social media abuse that he started to self-harm.

Foley-Walsh thinks he was targeted largely because of his “forthright” anti-abortion views, and echoes his host’s opinion that people should be allowed to hold different views. Reasonable enough, except that Boylan expresses this in the standard language of a conservative culture warrior, muttering about the “liberal left” and suggesting that being right-wing “almost seems to be a crime these days”.

This all pales into insignificance beside the host’s nocturnal show, Niall Boylan at Night (4FM, Sunday-Thursday), where the callers are so deliriously fired up that they make the host’s most rhetorically-challenged daytime guests sound like Cicero in comparison. Topics range from the appropriate age for baby-sitters to old reliables like removing the sacraments from primary school. The latter issue predictably stirs up strong feelings, if little logic.

One caller, Dave, fulminates profanely about child abuse in the Catholic Church before getting into a shouting match with another guest, Antoinette, who is in turn agitated that communion should be removed from the classroom because of “whinging and complaining”.

It’s surely a coincidence that both callers sound like they may have enjoyed a refreshing beverage earlier in the evening. Boylan occasionally attempts to be reasonable, as when he explains why he isn’t a believer, but generally he intervenes to stoke the fires of argument. At one point, Antoinette claims she isn’t religious, but believes in God.

“If you believe in God, you’re religious,” her host replies, ensuring a bit more on-air friction. Protesting farmers aside, no-one can accuse Boylan of sitting on the fence.

There’s little mistaking where Joe Duffy stands on the farmers’ tractor protest when he opens Liveline (RTÉ Radio 1, weekdays) by interviewing Mick, a cancer patient from Dublin forced to miss a hospital appointment because of the gridlock.

Having set the scene, Duffy interviews a protestor, Christopher, only to find chances of a showdown diminished by news that the tractors are about to move out of the city. Luckily, the host finds another point of contention, when Christopher blames the gardaí for causing the shutdown by blocking the protestors from driving by the Dáil.

“That’s a joke,” the presenter replies in disbelief.

Though Duffy makes a great show of trying to uncover whether the guards prevented the farmers from proceeding, he sounds as happy to gently mock his caller, whose defiant attitude admittedly doesn’t help the situation. When Christopher says he’s unable to move his tractor forward, his host asks him: “There’s no reverse gear on that 200 grand tractor?” Even so, Duffy is keen for Christopher to start his vehicle. “We all love to hear a tractor,” he says, perilously close to taunting his guest.

At his best, Duffy can tease out the human stories behind the headlines, but in this case he seems more intent on exacerbating the situation. With emotions running high on all sides, Duffy might fare better in neutral gear.

Radio Moment of the Week: Baa baa bad jokes
With Lyric FM in the throes of upheaval, Marty Whelan continues to plough his daftly enjoyable furrow as normal, defying the earnest conventions of the classical world – and indeed, the real one - on Marty in the Morning (Lyric, weekdays). On Tuesday, he receives a request to play a song by 1960s Australian easy listening group the Seekers. Whelan duly obliges. “I can play ‘I’ll Never Find Another You’,” he says, before delivering the corny punchline: “As the farmer said when he lost his sheep.” Even in uncertain times, Whelan doesn’t give a flock.