Review: The Netflix show is too mature for kids and too juvenile for grown ups 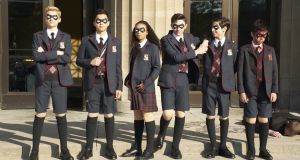 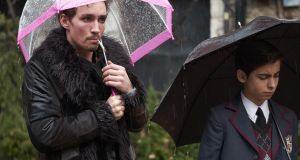 Rebert Sheehan in The Umbrella Academy

As its name suggests, The Umbrella Academy (Netflix, now streaming) is a catch-all kind of superhero show; providing a flimsy shelter for a number of ideas that would be otherwise left exposed, bedraggled and very shaky.

Advanced intelligence on Netflix’s latest superhero adaptation suggested a quirkier affair than the streaming giant’s brooding, muddled Marvel shows. After all, it takes its source material from a Dark Horse comic, the publisher behind the winningly preposterous Sin City and Hellboy and various manga affiliates. In other words, no capes, no capers.

Even in outline, though, The Umbrella Academy feels like a show that has cribbed its material from other schools.

Seven children with super powers, born in bizarre circumstances to entirely unexpecting mothers, are bought by an eccentric billionaire and trained in his mansion to fight crime. That business plan should have given X-Men’s lawyers reason to remonstrate, but, then again, these VII-Men have a more meagre suite of abilities to get on with.

First there is Luther, a man with impossible bulk, who currently lives in a caravan on the moon. Then comes Diego, a dab hand at fighting, knife-throwing and taking fashion advice from the Punisher. Allison can manipulate reality by lying and has become a public figure, which is coincidentally Donald Trump’s superpower too. Klauss (Robert Sheehan), devoted to his addictions and all things camp, can talk to dead people, like tag-along deceased member Ben. Number Five can leap through space and time. And finally there is Vanya (Ellen Page), who, we are assured, can’t do anything at all.

Long estranged, they return home following the death of their unbeloved father/collector, primarily to mope, briefly to dance, but soon to address the mystery of his death, and, further down their list of priorities, to avert an imminent apocalypse. And did I mention their malfunctioning 1950s housewife robot mom (“You look sad. I’ll make cookies”), two goons in children’s masks (one of them played, indifferently, by Mary J. Blige), or an ageing monkey butler with an English accent named Pogo? Perhaps I wanted you to give it a chance first.

If the premise sounds like the elaborations of extemporising children unaccustomed to the sin of plagiarism (in truth, the comic was co-created by Gerard Way, frontman of My Chemical Romance), Steve Blackman’s screen adaptation gives it a more stridently adolescent tone. The violence, for instance, is ultra and stylised and dumb. The dialogue often comes in plumes of purple or blasts of blue. The overall effect – something very silly taken quite seriously – is too mature for kids and too juvenile for grown ups. (One character, Five, a dour man frozen forever in the body of a child, seems less like a tragic figure than a persuasive picture of its target audience.)

That’s why, with very little room for alternatives, the plot twists won’t surprise anyone without severe attention deficit. Characters are either so shallow, or their actions so stupid, that not even Ellen Page (nothing but straight and sullen), or Robert Sheehan (nothing but queer and wild), can do anything to secure your investment in their fates. The show’s lesson, finally, is that of any number of umbrellas, whipped out of shape by the first gust of sense, or destined to be as easily forgotten and abandoned.