Review: The mood in Winterfell after the victory over the dead is sombre and suspicious 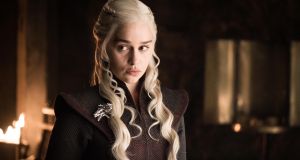 This article contains spoilers for season eight, episodes one to four.

You would think surviving the apocalypse together might count as a bonding experience. Instead, the atmosphere in Winterfell after the patchwork alliance of the living vanquished the army of the dead is sombre and suspicious.

The top-table characters may have miraculously survived, but the bodies of the heroic fallen must be burned in solemn three-deck pyres. (The seemingly infinite bodies of the villainous fallen must have incinerated with more speed and less ceremony.)

Officiating at the mass funeral, Jon makes it political, celebrating those who “put aside their differences to fight together”.

Differences are just as easy to take up again, it would seem, as the victors begin to split instinctively into factions: Are you Team Jon or Team Dany? This comes with much fan theorising into who would make the better ruler: Dany, who wants the throne, or Jon who doesn’t?

The battle for hearts and minds in Game of Thrones is like most of its battles, conducted showily, and rashly, against all sober advice.

Take Daenerys, with the unbudgeable puss on her, who briefly raises morale by promoting Gendry, the bastard blacksmith, to Lord Gendry Baratheon of Storm’s End.

Drinking games ensue over wine, ale and – in one accidental bit of product placement – a cup of Starbucks coffee that has somehow found its way into the feast, and which may explain Dany’s agitation.

Cosy coupling takes place (“I’ve never been with a knight before,” says Ser Jaime to Ser Brienne, a milestone for equality).

Others, Garbo-like, just want to be alone, like The Hound, or Winterfell’s MVP Arya. The Knight King Slayer lets down Gendry gently: she was born to jump.

Jon, meanwhile, is roundly valorised by the Free Folk, the Northmen, everyone. (Hey, he’s a people person.)

He’s also one of those rare characters who draws the line at incest, a real mood killer in the North. But is Aunty Dany really that into him, or just threatened by his rival claim to the throne?

Jon, swearing himself to secrecy about his true parentage, proceeds to tell absolutely everyone that matters.

More than a little peeved that he has acquiesced to Dany’s ill-considered plan to topple Cersei – by storming her defences with their vastly depleted, extremely knackered forces – Jon’s siblings demand a family meeting.

Yeah, about that, Jon says. First, though, they have to swear to keep his news to themselves, he insists, reverting to flimsy assurances of the playground. Pinky promise?

Needless to say, the news travels like wildfire (which, in Game of Thrones, has appropriately explosive connotations). “It’s not a secret anymore,” reasons Varys. “It’s information.”

Why, just look at how well her battle plan is working out: swooping directly into an ambush that blasts one of her two remaining dragons clean out of the sky (RIP Rheagal, we hardly differentiated you), sinks their navy and ends with Missandei taken captive.

How strategically useful it was to bring a translator on this mission is a matter of debate, but perhaps her squeeze Greyworm wanted company. It does get lonely at sea.

Either way, Missandei makes a significant prisoner for Cersei, who has managed to weaponise both her navy and her sneer.

She has also amassed a human shield of several thousand CGIs in the Red Keep which complicates the plan of attack. Dany’s advisers try to persuade her that torching a multitude of innocents is not a good look for a liberator.

This is a delicate situation that requires forbearance and tact, such as Theodore Roosevelt’s advice to speak softly and carry a big stick. In Game of Thrones, however, people jab wildly at the nuclear button then scream into the aftershock.

Much of this episode is taken up with clearly deranged people being assured they are not monsters (Cersei and Dany), while hugely redeemed characters lapse back into villainy (“She’s hateful and so am I,” Jaime tells Brienne, breaking bad to rejoin his sister) and consistently ambivalent characters just play the percentages. (Like Bronn, who delays his commissioned assassination of the Lannister brothers in exchange for a bigger Lordship).

That may be brazen, but it does seem shrewder than Dany and Cersei facing off to exchange the same blunt ultimatum: surrender or die. Given the choice between détente and decapitation, it’s no surprise how Cersei chooses to play the game.

And while gentle Missandei goes out fighting (Her last word is “Dracarys”, which translates roughly as “burn, baby, burn”) there appears to be more method in Cersei’s madness.

The war between Ice and Fire has been settled. Instead we have a showdown between a hot head and cold blood.

The Abstainer: Gripping tale of violence, betrayal and vice
4

Donald Trump: ‘You meet a woman. In one second, you know whether it’s going to happen’
6