A Starbucks in Winterfell? How did a coffee cup end up in Game of Thrones 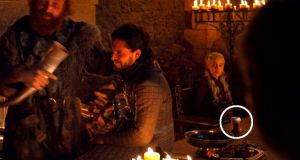 Game of Thrones is one of the most expensive and elaborately produced television shows ever. And yet. During Sunday’s episode, a disposable coffee cup could briefly be seen sitting on a table at Winterfell. The modern-day item was jarringly out of place amid candlelit chandeliers and goblets of Dornish wine. The cup, which appeared in front of Daenerys Targaryen for only a few seconds, may have gone unnoticed by the show’s vast production team – but not by its millions of fans. Like most things in the final season of Game of Thrones the item was quickly spotted, and its cameo was dissected, overanalysed and made into memes.

“Maybe they assumed that the lighting would be as dark as last week’s instalment and that nobody would notice,” one fan joked on Twitter, a callback to complaints about a lack of lighting in the previous week’s episode. Naturally, we had many questions: On a show so detail-oriented that the actor who plays Bran Stark has to sit in one place during film breaks so his furs don’t move out of place from scene to scene, how did an item so clearly from the 21st century manage to sneak into the final version of the episode? Was it, in fact, a Starbucks cup, as so many online suggested? When did a Starbucks come to Winterfell, and what is the Dragon Queen’s regular order?

Starbucks seemed to have an idea, taking the opportunity to plug its Dragon Drink, a pink concoction with sweet mango and dragon fruit flavours. After remaining silent for much of the day, HBO acknowledged many inquiries about “the craft services coffee cup” and joined the fun with this official statement: “The latte that appeared in the episode was a mistake. Daenerys had ordered an herbal tea.”

You're telling me they had TWO YEARS to put together a decent show and they couldn't even spot the goddamn Starbucks cup in Winterfell??!?! #GameOfThrones pic.twitter.com/8opg7nyydv

The latte that appeared in the episode was a mistake. #Daenerys had ordered an herbal tea. pic.twitter.com/ypowxGgQRl

Executive producer Bernadette Caulfield saw the lighter side of cupgate, while at the same time defending the show. “Westeros was the first place to have Starbucks, it’s a little-known fact. If that’s the worst thing that they’re finding, we’re in good shape,” she said in an interview.

Some were taking the matter more seriously. An art director for Game of Thrones Hauke Richter, told Variety that the mistake had been “blown out of proportion”. “Things can get forgotten on set,” he wrote. And some online fans seemed to agree: “If your post has been removed today there is a 95 percent chance it’s because you posted a screenshot of a Starbucks cup,” the r/freefolk moderators warned on Reddit. “Stop it,” the post said. “There’s memes about it. We know already.”

The incongruity came in the final season of Game of Thrones, which has involved an all-out effort from HBO. The network, which declined to discuss its budget for the show, is believed to have spent enormous amounts on the final six episodes, with each episode costing $15 million (€13.4 million), according to a report by Variety.

But such inconsistencies are a common danger for television shows and movies set in a real or fictional past, and even the most meticulous directors have been unable to stop them from appearing. In The Lord of the Rings: The Fellowship of the Ring, which is set in a world without modern technology, a car can be seen in the background as the main characters Sam and Frodo converse in a field. In a 2003 interview, though, the movie’s director, Peter Jackson, said the car had been erased for the DVD. A car is also visible in a scene of Braveheart, the 1995 movie set in 13th-century Scotland.

Downton Abbey the popular British drama set in the early 20th century, once released a promotional photo witha plastic water bottle in the background, a blunder that was given the moniker “water bottle-gate.” The show had some fun in response: “#wH2oops,” the show posted online, along with a photo of the cast holding water bottles and a link directing fans to an organization that promotes clean water.

The Boys in the Band is theatrical, dated and utterly fabulous
10