For £3m, a family stays silent about their son’s sexual abuse

In BBC’s new drama, Dark Money, justice is available only to those who can afford it 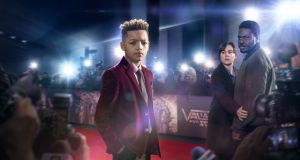 There’s nothing especially dark about the money in Dark Money (BBC One, Monday, 9pm). If anything, it arrives utterly undisguised, indiscreet about its source and brazen in its purpose.

This is the price that one Hollywood film director’s legal representatives put on buying the silence of a family whose son has been molested on set.

In Levi David Addai’s new drama series, which revolves around the consequences of non-disclosure, the cheque for £3 million even comes emblazoned with the name of the film studio that issues it.

Addai’s drama throws more light on the cover-up – the moral dilemma of a squeezed family accepting hush money from a powerful operation and the festering wounds it leaves – than the abuse itself.

That amplifies the disquieting timing of its premiere, on the same day that New York financier Jeffrey Epstein was arrested on charges of sex trafficking, following a long history of secretive plea deals, settlements and high-profile connections.

It’s a shame, then, that the show itself finds so little to say, reducing a crime of such gravity to a “what would you do?” ethical problem. Beginning in the lavish, swimming-pool adorned mansion, where ostentatious wealth cannot quell uneasy consciences, we already know the family’s decision, before the drama pursues the tell-tale conceit of the unconvincing storyteller: “One Year Earlier”.

Isaac, an inner-city Londoner fresh from filming a sci-fi blockbuster, presents his parents with evidence of his abuse, which he surreptitiously recorded on his phone. The bravery of confiding, and the sensitivity and trust of his family, comes second-place to a brusque plot point.

Isaac, a gifted actor, would prefer to act like nothing happened, gamely sharing dream-factory anecdotes at school, but sick to his stomach by the hypocrisy. His parents, Manny and Sam, consider legal action, but it is beyond both their jurisdiction and resources. When the studio learns of the transgression via a treacherous chaperone they make an indecent proposal.

Addai is clearly concerned with where vulnerability meets exploitation, particularly that of child actors put in venal adult circumstances: in one unsettling scene, a pushy stage mother asks Sam for professional tips to encourage her own retreating daughter. But poverty, Dark Money stresses, offers less protection.

When Manny and Sam are outmanoeuvred by a phalanx of bullish lawyers and dazzled by their cheque, the show pursues this compromising bargain as a sensationalised morality tale.

Its darkest suggestion, however, is not that abuse is concealed by sinister payoffs, but that justice is available only to those who can afford it.