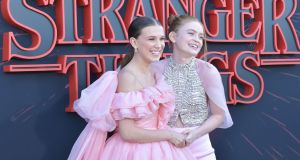 Stranger Things 3 has broken viewing records for Netflix, becoming the most watched film or series in the first four days of release in the streaming service’s history.

More than 40 million households tuned in to watch the first episode of the third season of the 1980s-set fantasy drama between its launch on Thursday and Sunday, according to Netflix viewing figures, while 18 million households finished all eight episodes of the season in the same time frame.

The figures shared by Netflix have not been independently verified, but the company says that views are only counted if at least 70 per cent of an episode or film has been watched.

Netflix has historically shown reluctance to share viewing data, but has begun to release selective information, including monthly top 10 lists. Its first chart in January was topped by post-apocalyptic drama Bird Box, which recorded 45m household views over its first week of release.

Stranger Things has long been regarded as Netflix’s flagship series, becoming a word-of-mouth hit when it launched in 2016, and making stars of actors Millie Bobby Brown and David Harbour. The show has proved a profit-winner for the streaming giant, generating an estimated 75 brand tie-ins for its third season, including deals with H&M, Burger King and Coca-Cola.