Whatever about a brand new resort putting Longford on the map, Higgins is way ahead on that front 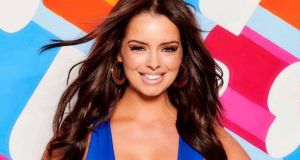 Longford’s Maura Higgins of Love Island: she might need to thread carefully from her on in. Photograph: Facebook

You know something has reached peak status when the Taoiseach is professing to enjoy it. At this week’s visit to Center Parcs in Longford, he was canny enough to doff his cap to local hero Maura Higgins. “Personally, I like her but it’s a matter of personal opinion,” he ventured, as two unlikely worlds bumped up against each other. “She has an interesting turn of phrase.”

Whatever about the brand new resort putting Longford on the map, the Love Island beauty is already way ahead on that front.

If that wasn’t accomplishment enough, Maura also has the dubious distinction of prompting Sean O’Rourke to utter the phrase “fanny flutters” on RTÉ Radio 1 this week as he attempted a deep dive into the secrets of Love Island’s success.

Hozier even had a take on the reality show (and we could be wrong here, but these sound like the words of a man who professes not to watch, but knows full well what’s going on in the villa): “From what I’ve heard about Love Island, it sounds like the psycho-sexual warfare/borderline abuse version of putting spiders in a jar and rattling it to see what happens.” Anyway, the Love Island fever/pestilence/whatever is officially airborne, is what I’m getting at.

Yet how, amid a bevy of interchangeable, fame-hungry beauties, has Maura Higgins managed to consistently hold her own?

By kicking the hornet’s nest, that’s how.

As Curtis and Amy and Michael and Amber were this week’s big storylines, and Maura got effectively relegated to a bit part as a shoulder for Amy to cry on, Yet she found her way back into the action via an interesting volte face.

Regular viewers will no doubt recall that, when Maura arrived into the villa, Curtis admitted to her that he’d slid into her (Instagram) DMs a few months prior. Far be it from me to put words in Curtis’s mouth, but essentially, this is code for “let’s maybe do the dirty”. She had scant recollection of same, meaning that the outlook for a coupling wasn’t exactly strong. And so Curtis coupled with Amy in a romance positively drenched with the soundtrack of Kylie & Jason’s Especially For You. Well, for a bit, anyway.

As “Curtmy” (or “Amis”) hit the safety barriers in a slow motion bang-up, Maura and Marvin were also cooling. And then came a bombshell from the Longford Bombshell, who is frankly taking the job spec a little too seriously.

“I had a chat with Curtis today, just a casual chat, it’s just weird now because he’s single,” Maura told Lucie, as the latter’s eyes positively bugged at the revelation.

“I’d always look at him and think he’s obviously gorgeous, his smile is like f***ing hell, he’s very manly and he’s funny, he’s almost the whole package for me.”

Now, if you’d suspected that Love Island was the work of a cache of strenuously imaginative scriptwriters, this might well have been the moment where your theory proved right. (First off, there are boys starting primary school in September who are more manly than Curtis, sorry not sorry).

In any case, Maura ploughed ahead with the flirtation, asking ballroom dancer Curtis if he’d teach her a few dance moves. They then did so in the eyeline of a quietly seething Amy, who had previously asked Curtis to teach her the exact same moves. You might recall he’d said he didn’t want to. An open and shut case of “he’s just not that into you” and no mistake.

For now, what will happen with this fledgling pairing is anyone’s guess. But let’s just pause the action and step out of the frame, Matrix-style. Because Friday night’s installment of the show does raise a few questions: will Maura stop at nothing to win the series, going so far as to couple up with a man that she essentially palmed off in the real world? Or is she that fond of drama/airtime that she will stir up a meaty storyline at whatever cost?

Earlier this week, fans praised her as a true “girls’ girl” as she helped salve the bruised egos of the rebuffed Amber and Amy. Yet hooking up with Curtis as his still-tender rejectee watches on is a definite violation of girl code. And given that the majority of viewers are young women jaded with today’s swipe-right dating culture, that sort of carry-on would definitely see the Longford beauty fall from the public’s graces. And with her reputation as a tart with a heart balancing on a knife-edge, Maura being upstyled into a sort of villainous, avaricious vixen doesn’t hold quite the same appeal. Even Leo wouldn’t be that into her, surely.

The books quiz: Zadie Smith is married to which Irish writer?
6

Patrick Freyne: You endearingly sentimental sociopath, I’ve just the show for you!
7