If you wanted ‘a bit of fun’ in 1950s Ireland, there was only one lubricant available 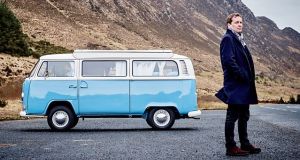 People can be slow to keep a record of pleasure. We remember the serious stuff first: the battles and wars, important dates and deaths, tragedies and dramas. But happiness, even broadly shared, is too ephemeral to leave a lasting impression.

In the case of Irish showbands there’s even less residue. Tenacious groups of touring musicians who toured the country between the 1950s and 1970s, showbands worked hard for something seemingly trivial: the business of bringing people together.

“Fun was not really at the top of people’s priorities,” one contributor to Showbands: How Ireland Learnt to Party (RTÉ One, Monday, 9.35pm) says of 1950s Ireland during this nimble social history of joy.

It’s telling that the speaker, Declan Lynch, is still inclined to temper his own appreciation: “It wasn’t that they were spectacular in themselves, although some were, but what else was there?”

Ardal O’Hanlon seems like an unlikely guide into such an enquiry. But, as a comedian on a quest to find out “what this craze might say about Ireland and that time in history, he brings just the right combination of frivolity and sincerity.

Driving a sky-blue VW van across Ireland to follow the showband routes, O’Hanlon makes for an affectionate enquirer, even if the programme imagines DeValera’s Ireland, bright with cosy homesteads, as one of postcard kitsch.

“The one thing that united everyone on the island was itchy feet,” O’Hanlon says of the North/South divisions: “the urge to dance.”

If they had other kind of urges, they were not welcome at parochial halls, where dancing couples were pried apart to “make room for the holy ghost between them”.

More touching, if that is the right word, is O’Hanlon’s conjecture that showbands “were lubricants to getting men and women together”. Barry Devlin, of Horslips, and one of a fine assembly of commentators, agrees, up to a point. “I wish you hadn’t said lubricants,” he replies.

In that, though, showbands fulfilled a role that might have been met in other eras by bonfires, nightclubs or – Lord help us – Netflix.

More uniquely, showbands can be seen as a plumb line through an accelerating time of social change: from the insular 1950s through the 1960s and finally into the tumultuous 1970s.

Director Mike Connolly is satisfyingly attentive to both its innocence and industry, at once celebrating the glam and the grubby sides of a suddenly booming business.

It helps that much of this comes with a relish of irony: dismal rural spaces called Ballroom of Romance, a performance of glitz underpinned by toilet-free dressing rooms and short-changing hucksters (as Margo O’Donnell and Twink entertainingly describe), a Mayo showband slathered in fake tan named The Riviera, or The Miami Showband failing to make it big in Las Vegas because Dickie Rock’s stubborn repertoire of Frank Sinatra songs were also being performed further down the strip by one Frank Sinatra.

Any history of showbands must conclude with the Miami Showband Massacre, an atrocity, in 1975, that made a target out of innocence, a brutal war against fun. Was it true that the UVF shot Fran O’Toole, the band’s famously talented and good-looking new singer, in the face, O’Hanlon asks survivor Brian McCoy? “They shot Fran 22 times and 17 of those bullets were in his face,” McCoy responds. “The savagery was unreal.”

Such was the monstrosity of that attack, which the programme’s contributors agree finished off the showband industry, that it’s hard to retrieve its once weightless appeal, as though history only recognised the phenomenon when it became part of a catalogue of political horrors.

That makes it all the more moving, I think, that O’Hanlon’s last pronouncement on the phenomenon, speaking from beside a church, as though delivering a gentle eulogy, comes with a suddenly bright pivot. “Above all, it was just a bit of fun,” he says.

That’s something worth remembering too.

‘He’s so strapping and virile’: Patrick Stewart at 80, by Shatner, McKellen, Grammer and more
10