Kirsty Young steps down as host of Desert Island Discs 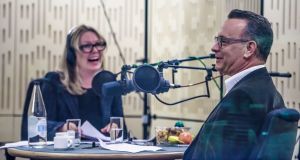 Kirsty Young has stepped down permanently as host of Desert Island Discs, saying her break from the radio show has inspired her to “pursue new challenges”.

The broadcaster first presented the castaway programme 12 years ago but had a spell away from it last summer after being diagnosed with a form of fibromyalgia.

The 50-year-old has now announced that she will not be returning to the long-running BBC Radio 4 show.

The former Five News anchor said she is “now well on the way to feeling much better” but that being away from the airwaves changed her “perspective”.

The BBC said no longer-term decisions have been made about the host but that it is “delighted” that Lauren Laverne, who has been filling in for Young, will continue to present the popular programme.

“Having been forced to take some months away from my favourite job because of health problems, I’m happy to say I’m now well on the way to feeling much better.

“But that enforced absence from the show has altered my perspective on what I should do next and so I’ve decided it’s time to pursue new challenges.

“Having hundreds of Castaways share their triumphs, tragedies, tribulations and tracks with me over the years was a huge privilege and an education. I am so thankful to (creator) Roy Plomley for the brilliance of his format, and I wish the programme and Lauren all the very best.”

Young took over from Sue Lawley as the host of Desert Island Discs in 2006 and was praised for her style on the show, in which guests share their favourite music while talking about their life.

She presented 496 episodes as well as fronting its 70th and 75th anniversary celebrations.

Fibromyalgia, also called fibromyalgia syndrome (FMS), is a long-term condition that causes pain all over the body, according to the NHS.

As well as widespread pain, people with fibromyalgia may also experience increased sensitivity to pain, fatigue, muscle stiffness and headaches.

Desert Island Discs was the creation of Plomley — the idea came to him while he was at home and in his pyjamas.

The first broadcast was recorded in the BBC’s bomb-damaged Maida Vale studio on January 27th 1942 and aired in the Forces Programme at 8pm two days later.

It was later presented by Sir Michael Parkinson, and Lawley became the first female host.

BBC director of radio and education James Purnell said: “Kirsty has been a wonderful host of Desert Island Discs for more than a decade and her intuitive interviewing style as well as her warmth and humour has helped bring out incredible life stories and anecdotes from her castaways. We know how loved she is by listeners and we all wish her well for the future.

“Lauren Laverne has been doing a brilliant job at the helm in Kirsty’s absence and I’m delighted she continues to host one of Radio 4’s most popular shows.”

BBC Radio 6 Music host Laverne, 41, said: “Stepping in for Kirsty on Desert Island Discs (which was already my favourite programme) has been an enormous honour. I wish her the very best in her next chapter.” –PA

Have arts and culture been demoted again?
9