From gazing at the moon to gazing at Aidan Turner, back as Poldark one last time 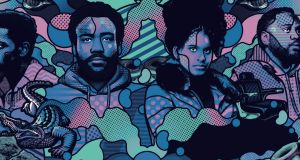 Gardeners’ World
Friday, BBC2, 9pm
Monty Don and his crew focus their attention on the loss of wildflower habitats in the UK and the part that gardeners can play in averting the resulting loss of wildlife. In Lincolnshire, Adam Frost finds out how crucial meadows are to supporting the ecosystem. Arit Anderson visits East Sussex to discover the results of a recent wildlife survey carried out in the gardens there. And Nick Bailey travels to Staffordshire, where meadows are being grown in gardens for the benefit of wildlife. Plus: Carol Klein identifies plants that can help increase insect and bird populations.

Manchester International Festival: Welcoming the World
Friday, BBC2, 11.05pm
The event, which takes place every two years, got under way on Thursday with Yoko Ono’s Bells for Peace, a mass-participatory artwork that invited thousands of people to ring and sing out for peace. No doubt we’ll get a taste of it in this programme, which offers a guide to what’s happening over an 18-day period. Film fans will be most excited about the participation of David Lynch, who is taking over the HOME venue for the duration. Lynch’s contribution includes the largest exhibition of his visual art ever assembled in the UK, as well as film screenings and gigs inspired by his work. There’s also a look at Idris Elba and Kwame Kwei-Armah first collaboration (the stage offering Tree), and Maxine Peake and Sarah Frankcom’s theatrical insight into Velvet Underground singer Nico.

A look at the making of the 1957 album, the debut of American rock’n’roll band The Crickets, and the only one featuring Buddy Holly to be released during his tragically brief career, which ended with his death in a plane crash two years later, aged just 22. The “Chirping” Crickets album survives as the purest testament to Holly’s skill as a singer, pioneering guitar player and songwriter in an age when few of his peers composed their own material. Contributors include former band member Jerry Allison, singer Cliff Richard, and writers John Beecher and Frank Blanas.

Moon Launch Live
Saturday, Channel 4, 8pm; Monday-Friday, 7.55pm
It can be harder for viewers born after 1969 to imagine what a truly momentous moment it was when Neil Armstrong became the first human being to walk on the moon. Channel 4 takes viewers back in time to the summer of ‘’69. Drawing on footage from the Nasa archives, contemporary programmes and news clips and even era-appropriate adverts, it places the Apollo 11 mission in its wider context, showing how it took place against the backdrop of the Vietnam War. There are short daily ‘”updates” throughout the week, but we begin with this hour-long documentary following the astronauts’ final preparations, and captures the sense of anticipation surrounding the countdown.

American TV is undergoing a revolution – and not just because of the arrival of streaming services like Netflix. It’s also produced a number of hit shows, including Dear White People, Insecure and Atlanta, which have majority African-American casts and address issues of race and identity with a new frankness. To find out more about why and how the industry is changing, Reggie Yates heads to Hollywood to meet some of the key players, including Caleb Mclaughlin, costar of Stranger Things, and Mahershala Ali, who in between picking up Oscars for Moonlight and Green Book found time to appear in True Detective. Yates also talks to writers and showrunners ranging from Lena Waithe (Master of None, The Chi) to Justin Simien (Dear White People).

Atlanta: Robbin’ Season
Saturday, BBC2, 10pm
The acclaimed comedy drama about a rapper and his manager returns for a second series beginning with a double bill. As Robbin’ Season’ dawns on Atlanta, things escalate when Earn and Darius pay a visit to Earn’s uncle, In the second epsiode, Al and Earn have a day of meetings at the record company but things do not look promising as they have become mysteriously distant. Tracy, fresh out of jail, provides Earn with another way to make some extra cash. Starring Donald Glover, Brian Tyree Henry and Lakeith Stanfield.

The fifth and final series of Poldark kicks off with Aidan Turner in full smouler It’s a new century, but Ross Poldark is soon sucked back into the same old intrigue, plotting and betrayal. And to top it all, he’ll probably have his top ripped off – again! (The tailors’ bills alone must be crippling.) Ross is looking forward to a settled life in Cornwall, but must return to London to help an old friend out of a pickle. He finds the capital has changed, and not for the better. Can Poldark and his shirt survive this newly hostile city? Is the Archbishop of Canterbury an Anglican?

Louis Theroux: Surviving America’s Most Hated Family
Sunday, BBC2, 9pm
Thirteen years since first encountering one of America’s most notorious hate groups, film-maker Louis Theroux makes a long-anticipated return to Kansas to spend time with the Westboro Baptist Church, a hugely controversial Christian ministry that for years has picketed at military funerals and other high-profile events with deliberately provocative and homophobic placards. Immersing himself in the strange world of Westboro, Theroux explores what happens when a hate group largely populated by one family loses its patriarch.

The Sky at Night: The BBC & the Moon
Sunday, BBC4, 10pm
It will not have escaped your attention that the 50th anniversary of the Apollo 11 Moon landing is quickly approaching (the historic flight began on July 16th, 1969 and touched down on the lunar surface on July 20th). As part of the celebrations, Maggie Aderin-Pocock looks through the archives to show how, with assistance from Nasa, the BBC reported on the mission. She is joined by scientist John Zarneki, first British astronaut Helen Sharman, and writer/broadcaster James Burke, who reported the momentous story at the time.

Touched by Auschwitz
Sunday, RTÉ2 , 7.40pm
This documentary originally aired on the BBC to mark the 70th anniversary of the liberation of the concentration camp by Soviet forces in January 1945. Laurence Rees travals to Jerusalem, Chicago, London, Bavaria, Krakow and Tel Aviv to talk to six survivors, along with their friends and families, who discuss their problems, challenges and triumphs since the end of the second World War.