Feel Good: A masterpiece of a sitcom starring Mae Martin as Mae Martin 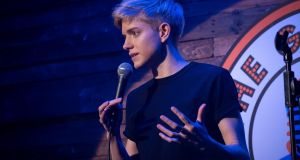 “It’s partly because there’s a new hunger for representation, and partly because there’s a hunger for authenticity,” she adds, over a sparkling water in Channel 4’s HQ. “People, especially the younger generation, can just smell fakeness. They’re allergic to anything that’s not personal and authentic. In stand-up, that’s the trend right now. Maybe that’s the influence of reality TV, who knows.”

Over two decades, Martin’s sharp observations about her own and society’s changes, norms and contradictions have morphed in form. Growing up in Canada, the stand-up comedy came first. Once she’d moved to London, along with the comedy tours and Edinburgh stints came the radio shows (like Mae Martin’s Guide to 21st Century Sexuality for BBC Radio 4) and the books (the related Can Everyone Please Calm Down?: A Guide to 21st Century Sexuality). Now it takes the form of Feel Good, a masterpiece of a sitcom, cowritten with Joe Hampson.

'She’s just fresh out of addiction, and that addictive behaviour permeates every aspect of her life'

It centres around Mae’s relationship to the newly-lesbian George (Charlotte Ritchie, also known for Fresh Meat, Call the Midwife), as Mae faces an uphill battle with her newfound sobriety, tries to make a name for herself in the comedy circuit and maintains a difficult relationship with her parents. What could go wrong?

Certainly, Mae the character and Mae the person in front of me have more in common than name and doe eyes. “She’s close to where I was about 10 years ago. She’s just fresh out of addiction, and that addictive behaviour permeates every aspect of her life,” says Martin. “She’s constantly looking for stimulation and struggling with things, but I think I have a pretty solid handle on sobriety, and I have close relationship with my parents.”

In fact, Martin is due to holiday with her parents in Ireland a couple of weeks after we meet, which will be her first visit over. (“I’m going do the literary tour of Dublin, I’m going to drink Guinness, and I’m going to go to St Patrick’s Cathedral, and I can’t wait,” she says. “And my friend David O’Doherty [the comedian] is going take us around.” Now that’s a city tour we’d like to join ...)

It’s a testament to the thinking behind the series that you don’t need to be in a same-sex relationship or recovery programme to relate to it: it’s a deep-dive into how our bad habits and weaknesses entwine, especially during that exquisite pain of a burgeoning relationship. “Can you look me in the eye and promise you’ll never break up with me?” says George early on, echoing the sentiment of anyone who’s handed their heart to their partner.

“Hopefully it’s a universal story, this love story. We’re all running around feeling isolated and looking for attachment,” Martin says. “And the definition of addiction that we crave something, find relief in it, and do it, despite knowing the negative consequences. I think everyone’s had that experience, whether it’s relationships or food or phones.”

But it enters unchartered territory in exploring same-sex relationships and the constant battle of staying on the right side of sober.

“They’ve been explored separately before, but I don’t think anyone’s looked at how they intersect,” she says. “And we’ve seen a lot of stories about homophobia, but not as many about the grey area of internalised homophobia. The world around us is moving so quickly and in the right direction, which is great, but that doesn’t stop you internalising these shards of shame, and that can really affect your relationship. That’s what I was interested in.”

Keep an eye out for Lisa Kudrow who plays Mae’s flawed mother, a role which introduced Kudrow to the delights of Blackpool in the UK (“We sent her the scripts as a stab in the dark and didn’t think she’d even read them,” says Martin, explaining Kudrow’s involvement).

There’s also Dublin actor Barry Ward, who cameos for an episode as a bullish comedian past his peak.

“He was our number one choice because we love [Netflix teen series] End of the F**king World,” says Martin. “He’s always brilliant in everything, and he’s so charismatic and likeable, which is great when that character then turns villainous – it’s unsettling because you’ve been so drawn to him. He absolutely aced it.”

If you were to say those things on stage, the audience would immediately turn against you, which is amazing

“There were a lot of things that I didn’t think about until we had to film it, but when I watched the final product, it was cathartic,” she says. “Everybody carries around different issues or pain, and representation is so important because if you don’t see that reflected in public, you can start to feel isolated from the world. When I watched the show, there was a sense of therapeutic relief because I knew all of those things that I wanted to say are going to be heard. And I’ve said them now: the stuff about addiction, about privilege, about my experiences in the comedy world, and all the added hurdles that people’s internalised shame pile on to a new same-sex relationship.”

Brought up by liberal parents in Toronto and England, where her father is from, the freedom afforded to her meant she grew up fast. She was stubbing out cigarettes to perform on comedy club stages at the tender age of 13. She dropped out of school at 15. She had her fair share of break-ups, became drug-dependent, then sober again around the time she turned 20, over a decade ago. Looking at her today, that might be when her ageing process stopped.

A benefit of her lengthy tenure on the comedy circuit is that she’s seen fortunes improve for diverse voices. “Comedy is a sociologically interesting job, because you see what people are offended by, and what they applaud,” she says. “When I started doing comedy, I was often going up after a comedian who’d been getting huge rounds of applause for saying homophobic things or aggressive stuff that punched down. Now it’s totally shifted. If you were to say those things on stage, the audience would immediately turn against you, which is amazing.

“I used to feel like I had to ingratiate myself with an occasionally hostile audience. I had to address how I looked, and I had to really apologise for it. Now I feel like I can talk about other things. There’s definitely been a shift, and it’s moving in the right direction.”

But there’s no denying there are a sliver of people who hold opposite views. The day before we meet, Martin tweets to express disappointment that Graham Linehan was given airtime on the BBC to discuss his controversial views on trans rights. I probe further.

“It’s always a bit bleak when someone chooses to use their platform to stir up hysteria and hatred against a very small and very marginalised group of people, especially when the hysteria is based on misinformation and wilful pedantry,” she says of Linehan. “He’s representing that conversation as if the mainstream is really supporting trans rights. That’s still not the case.

“The trans community are at high risk of violence and suicide, and words have real consequences, so it sucks. It’s doubly sad when the person going on the tirade is someone whose work you really admire. I have to give him the benefit of the doubt that he doesn’t know how damaging those comments can be.”

On a day to day basis, her home of London comprises of the full range of views on the divisive topics of the day, but it’s not enough to shake her spirits.

“I love London. I’m obsessed with it,” she says. “I’ve been here 10 years and I feel pretty embedded now, and lucky that I love what I do. But it’s definitely divisive and explosive in this country right now. I just hope we recover from this crazy time.”

Feel Good begins on Channel 4 on March 18th at 10pm. The full series is available to stream on All4 straight afterwards.