What is it in the Irish character that compels us to secrecy?

RTÉ’s Redress: Breaking the Silence was a brave and often unwatchable documentary 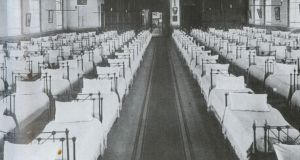 One of the five dormitories at Artane industrial school, 1905

The boy’s name was Joseph Pyke, and the last time John Prior saw him alive the child was being kicked and beaten by a Christian Brother. The Brothers, who ran St Joseph’s Industrial School in Tralee, later explained Pyke “had died from other circumstances”.

Visiting his friend’s grave years later, Prior found “a big old mound with weeds”. Opposite it was a huge cross commemorating the Christian Brothers and everything they had done for Ireland.

Prior’s testimony is one of many harrowing moments in Redress: Breaking the Silence, RTÉ’s brave and often unwatchable two-parter chronicling of the State’s appalling treatment of survivors of institutional abuse. Twenty-one years after Mary Raftery exposed the evils visited upon children in the care of religious orders in States of Fear, this new documentary unflinchingly makes the case that survivors have been left to suffer all over again.

It also takes a risk by breaching the confidentiality clause survivors were forced to assent to in order to receive compensation from the State’s Residential Institutions Redress Board. Several revealed how much they had been paid – the price of their silence, essentially.

Victims of sexual abuse, especially, often spent the cash as quickly as possible, referring to it as “dirty money”. The sums, typically under six figures, were, in any case, derisory.

How do you put a price on a childhood taken away, a life ruined? You can’t. The Irish State and the religious institutions certainly didn’t try.

“The attitude was, you didn’t do too bad,” is how Phyllis Morgan characterised her experience with the board. “You got on with your life, you worked for yourself. You felt like you were penalised because you had stood on your own two feet.”

Survivors recalled having to relive the abuse under cross-examination from legal representatives of the religious orders. “The Sisters of Our Lady of Charity used their right of reply to deny all allegations of abuse and neglect,” says survivor Mary Lodato. “Having to relive it, it’s a bit like you are put on an operating table and you are cut open and let there to fester.”

Mick Peelo’s documentary also implicitly asks us to consider what it is about the Irish national character that compels us to secrecy, to genuflect before institutions, to be so afraid of speaking out against injustice.

Most of us are lucky enough not to have suffered abuse. But many will have found themselves bumping up against the Irish compulsion to look the other way, to stifle dissent, to refuse to speak truth to power. To put the head down and carry on regardless. The wickedness of the industrial schools and similar institutions did not manifest from a vacuum. It bubbled up from somewhere within us.

The other point Redress makes is that this scandal is not history. In 2012 a new support service for survivors was set up by the State. Mary Lodato recalls resigning from the board because of her belief that survivors were not being listened to. Meanwhile legalisation currently before the Dáil proposes sealing the evidence heard by the Commission to Inquire into Child Abuse, the Residential Institutions Redress Board, and the Residential Institutions Redress Review Committee for 75 years.

The argument quietly and unsensationally put forward by the documentary is that this would be a final insult to victims. The testimonies should be readily available – a reminder of the malevolence allowed to fester in our midst.

While they’re at it, our leaders might look into demolishing the Christian Brothers memorial that looms over Joseph Pyke’s grave. They could put up one remembering their victims in its place.