I Am Jonas, a new comedy hour from Marc Maron and the third season of Ozark 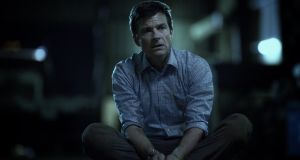 Jason Batemen as Marty in Ozark

March 6th
Starring the arresting Félix Maritaud (Sauvage, 120 BPM) I Am Jonas is a gripping French drama that’s equal parts coming of age narrative and psychological thriller. Told through two interweaving timelines it’s the story of Jonas (Maritaud) who, after being dumped by his boyfriend for his compulsive philandering, returns to his hometown where memories of one specific summer flood his mind. The film shifts between recalling his days as an introverted, closeted teen who embarks on a furtive relationship with the charming new kid in town Nathan (Tommy-Lee Baik) and the vacuous life the older Jonas leads, haunted by an unnamed darkness. As the truth of the past slowly infects the present day, Jonas must confront his demons to set himself free.

March 6th
Award-winning chef David Chang’s hit food show returns for a second season. The series mission statement remains the same with its focus on the cultural value of food, how it unites communities and broadens people’s minds but this time around, father-to-be Chang is intent on exploring the eating habits of the next generation. Although he hasn’t gone into full Jamie Oliver mode yet, there is an episode devoted to enticing the tastebuds of children and how they can be encouraged to eat a more varied diet. There are also the usual trips to spectacular international locations from Istanbul to Tokyo with celebrity guests like Top Chef’s Padma Lakshmi celebrating the vast variety of Indian food and comedians Danny McBride and Nick Kroll lending a hand in the kitchen.

Marc Maron’s latest hour-long comedy special for Netflix is a caustic end of days tirade against the current evils he views in modern society, including his scepticism about the wellness industry, the media’s pandering to infantilised grown men and the increasing reach of religious zealots.

March 11th
Created by acclaimed documentary film-maker Alex Gibney (Going Clear, Enron), Dirty Money explores the scandal, greed and corruption at the heart of big business and the finance industry. Season one delved into the murky world of payday loans, money laundering and big pharma with first hand accounts from both perpetrators and victims. This season takes a scalpel to topics such as Jared Kushner’s real estate empire, the Wells Fargo banking controversy and the Malaysian 1MDB investment fund scandal.

Based on the bestselling book by Robert Kolker, Lost Girls is the story of the unsolved case of the Long Island serial killer. The film follows the tireless work of Mari Gilbert (Amy Ryan) who after her 24-year-old daughter Shannon disappears, goes on the hunt for her child alone after the police dismiss her concerns. Following on from the true-crime hit Unbelievable, Lost Girls is another look at the way in which young women are viewed by the authorities, how victims are effectively silenced by the fear of not being believed and the misogyny that clouds investigations of crimes against sex workers. As Mari continues to search for her daughter she uncovers a story of police negligence and prejudice that helped a serial killer elude capture.

Feel Good is a semi-autobiographical dramedy series created by the Canadian comedian Mae Martin, who plays struggling stand-up comic Mae, who is trying to make a life for herself in London. Her world is thrown into flux when she meets George (Charlotte Ritchie) and the two begin an intense and intoxicating romance which shocks them both. Mae tries to navigate this all consuming relationship whilst attempting to recover from substance abuse issues as she fears she’s replacing one addiction with another. With a supporting cast that includes Lisa Kudrow and Sophie Thompson, it’s an affectionate, sometimes heartbreaking look at the grind of modern life and our desire to escape by any means necessary whether it’s through drugs, drink, sex or even laughter.

The Letter for the King

Another month, another fantasy epic that hopes to fill the Game of Thrones hole in viewers’ lives. After the success of The Witcher comes The Letter for the King, a boyhood quest story based on the bestselling Dutch novel of the name by Tonke Dragt. A young, failed knight Tiuri (Amir Wilson) is sent on a perilous mission to deliver a letter to his king to prevent a malevolent prince from destroying the kingdom of Eviellan. On this journey where he faces treacherous foes and uninhabitable terrains he must learn to become the knight he was fated to be. It’s Lord of the Rings meets Sword in the Stone as Tiuri travels through the country meeting various mystical strangers ready to impart their wisdom to him and further him on his spiritual journey to manhood.

March 25th
The first release from the partnership between Netflix and Michelle and Barack Obama’s Higher Ground production company, Crip Camp is a documentary that focuses on the story of Camp Jened, a tumble-down summer camp for disabled teens that took place in the 1970s in upstate New York.

The camp footage, which was unearthed by co-directors Jim LeBrecht and Nicole Newnham, shows teenagers who society shunned and who felt isolated from their peer groups enjoying the usual freedoms and experimentation of youth – dancing, smoking, forging summer romances – privileges that able-bodied teens so willingly take for granted.

The inclusivity of Camp Jened instilled in its inhabitants a mindset that desired change and as the documentary continues it shows some of the campmates’ transformations into important campaigners and central figures in the social movement that pushed forward the Americans with Disabilities Act. Crip Camp is the important story of a road to acceptance and recognition that is still not quite complete even in 2020.

March 26th
Directed by actor/film-maker Maria Schrader (Deutschland ‘83) and starring Shira Haas (The Zookeeper’s Wife), Unorthodox is a drama that follows a young woman as she flees her arranged marriage in New York and aims to start her life over in Berlin. Inspired by Deborah Feldman’s bestselling memoir of a young Jewish woman’s escape from a religious sect, it’s a powerful look at a woman trying to find her own voice and releasing herself from the constraints of a suffocating, oppressive lifestyle.

March 27th
After the unrelenting darkness of season two, with Marty (Jason Bateman) submerging himself further into a life of crime, the new season of Ozark is moving into more choppy waters. Set six months after the finale, Marty’s floating casino is up and running and is giving him more opportunities than ever, although the pressure and the excitement is proving detrimental to his marriage to Wendy (Laura Linney). More problems arise: with Cade Langmore’s murder plot yet to be solved as the authorities move into the Ozarks to investigate policeman Roy Petty’s death, the heat is on Marty and the rest of his family.

Can’t travel because of Covid-19? There’s always the inner journey
8