Ivan Yates turns the blowtorch on all politicians 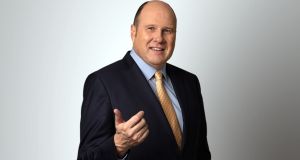 The news that Ivan Yates is planning to retire from broadcasting later this year may come as a blow to his fans – and a fillip to his rivals – but perhaps they shouldn’t despair or pop the corks just yet. After all, it wouldn’t be the first time that Yates has walked away from a radio show on Newstalk only to return. It mightn’t even be his second. For a presenter who regularly excoriates politicians for not keeping their promises, his propensity for comebacks can seem a bit rich. Elton John, who first announced his retirement in 1977 and is currently on a 300-date farewell tour, looks like Greta Garbo in comparison.

True, when listeners tune into Monday’s edition of the Hard Shoulder (Newstalk, weekdays), the presence of Mark Cagney in the host’s chair is slightly jarring –what, he really has left? Yates is back in the hotseat on Tuesday, however, with nary a mention of the “R” word. But for all that his pub landlord-style of opinionated broadcasting can irritate, infuriate and even insult, the show underlines what we’ll be missing after Yates departs the airwaves – whenever that might be.

There is, most obviously, his singular approach to interviews, particularly politicians. Combining his experience as a government minister with a dismissive scepticism, he doesn’t so much grill politicians as turn them over an open fire on a spit roast, regularly basting with scorn and derision. This aggressive style can backfire – co-hosting the recent election debate on Virgin Media television, he barely allowed the party leaders to speak – but it can make for pulsating radio, and even yield some insight.

Sure enough, Yates’s interviews with Labour Party leadership candidates Alan Kelly and Aodhán Ó Ríordáin aren’t stifled by excessive decorum. He tackles Kelly on his hard-charging reputation – which one suspects Yates secretly quite likes – but takes particular aim at Ó Ríordáin. “Your reputation is to be quite intolerant of people who disagree with you,” he says, with reference to his guest’s Twitter profile. “Humility is not something they associate with Aodhán Ó Ríordáin,” adds the host, a man renowned for his own reserved and modest demeanour.

That Yates enjoys getting a rise out of left-leaning politicians is no secret: he utters the phrase “liberal agenda” as though a distasteful epithet. But regular listeners will attest that he turns the blowtorch on politicians of all stripes. Moreover, he also asks pertinent questions on Labour’s declining vote and its place in a radically altered electoral landscape, which his guests answer with undoubted conviction but without being entirely convincing.

In other matters, he adopts an altogether larkier attitude. Discussing the possibility of reintroducing wolves to Ireland to increase biodiversity with Padraig Fogarty of the Irish Wildlife Trust, Yates sounds predictably incredulous. “Just imagine, you’re out having a picnic with a few sangers and a pack of wolves arrive,” he chuckles.

A similarly jovial air prevails during his interview with consultant Rob Hannon on irritable bowel syndrome. Unkind souls might suggest that Yates might have some expertise on this subject, as he can be a bit of a pain in the arse himself. The tenor of the discussion is set when the host asks his guest what the icky adjective “colorectal” means. “Is it your back passage, are we getting down and dirty right away?” he asks, clearly not concerned with courting the dinnertime demographic.

Over the next 10 minutes, Yates talks a bit too candidly about his own aversion to invasive procedures and makes a lazily sexist crack about older women. Yet despite all this, the item holds the attention. Yates suffuses the discussion with a disarming sense of humour and – eventually – lets Hannon go into bowel ailments in depth, if that’s the right way of putting it. It’s informative, exasperating, occasionally offensive and undeniably entertaining, much like Yates when he’s on-air. But shy and retiring? Hardly.

Yates may deem insulting politicians and trolling woke snowflakes as harmless banter, but such behaviour can easily take on an altogether more malicious hue, as becomes starkly clear on Sunday with Miriam (RTÉ Radio 1). Miriam O’Callaghan talks to four female ex-TDs who lost their Dáil seats in the election, though the focus is more on the personal experience than the political: “I’m not going into issues,” the host promises. Any notion that this is to be a cosy chat is soon dispelled, however.

O’Callaghan’s guests – Lisa Chambers of Fianna Fáil, Regina Doherty of Fine Gael, Jan O’Sullivan of Labour and independent Katherine Zappone – all agree that as part of that rare breed, women in the Dáil, they shared a camaraderie that transcended policy differences. But as the conversation continues, it emerges that they share another, more disturbing experience.

When O’Callaghan asks whether it’s more difficult being a woman in politics than a man, Doherty jokes that she doesn’t know, having never been a male politician. “I tell you what I do know,” Doherty adds, “we definitely get more abuse.” Chambers concurs. Male politicians may get stick, she says, but there’s an extra dimension for women: “It’s a lot more personalised.” Lest there be any doubt as to what this means, Doherty makes it clear. “If I had a euro for every time I was called the ‘C-word’, I’d be able to retire.”

That a troubling current of misogyny runs through social media is hardly news, but O’Callaghan shows just how casually people deploy it. The host sounds clearly taken aback as she describes the “bile” from “keyboard warriors” that greeted her own tweet that the four women were joining her. “The level of nastiness that’s out there is extraordinary,” O’Callaghan says. “Do they have no conscience?”

Given all this, it’s unsurprising that three of the politicians – Doherty, O’Sullivan and Zappone – say they are quitting politics. In this case, at least, there’s no doubt about their retirement.

Mixing the cerebral with the topical, the current season of Davis Now Lectures (RTÉ Radio 1, Sunday) focuses on the theme of “Making Home”, with architectural historian Dr Ellen Rowley hosting a series of stimulating talks. Last Sunday’s talk by UCD’s Prof Hugh Campbell is emblematic of the series. Taking his cue from the Talking Heads songs Houses in Motion and This Must Be The Place, Campbell touches on French philosophy, Oscar-winning movies and the proliferation of open-plan extensions in Irish houses – “No dividing wall that can escape Dermot Bannon’s hammer” – to illustrate how lives can be shaped by architecture: “Our homes embody us”. Like the other lectures, it’s unabashedly learned yet never patronising, introducing the listener to subjects they otherwise might not engage with. Still, it would be interesting to hear what Campbell makes of another Talking Heads classic, Burning Down the House.