‘Look sexy. Look hot. Don’t be so provocative. You’re asking for it’

In viral Be a Lady They Said, Cynthia Nixon highlights impossible pressures on women 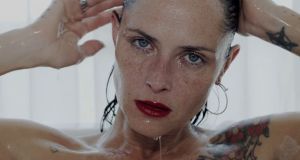 Be a Lady They Said: the video is based on a post from Camille Rainville’s Writings of a Furious Woman blog

The Sex and the City star and political activist Cynthia Nixon has fronted a video that highlights the impossible standards expected of women – and it has gone viral.

In the three-minute film, which was posted on girlsgirlsgirlsmag.com on Monday – the day the former Hollywood mogul Harvey Weinstein was found guilty of rape – a steely-faced Nixon reads a version of Be a Lady They Said, from Camille Rainville’s Writings of a Furious Woman blog.

“Be experienced. Be sexual. Be innocent. Be dirty,” the actor recites, listing some of the contradictory, often cruel messages women are told. “Be sexy. Be the cool girl. Don’t be like the other girls.”

Another passage goes: “You look frumpy. Loosen up. Show some skin. Look sexy. Look hot. Don’t be so provocative. You’re asking for it. Wear black. Wear heels. You’re too dressed up. You’re too dressed down. Don’t wear those sweatpants; you look like you’ve let yourself go.”

Rainville, who was a 22-year-old university student in Vermont, in the northeastern United States, when she posted the piece, in 2017, called her writing “highly amateur, far too unedited, and quite emotionally raw”, but it has struck a chord: the video version has already been watched more than three million times.