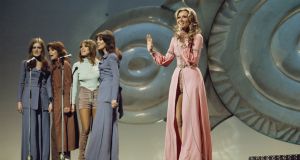 In April 1971, when Ireland hosted its first Eurovision Song Contest it was all about Northern Ireland. The song competition was being held in the Gaiety Theatre because the previous year Dana, from Derry, had won with All Kinds Of Everything.

In perhaps an attempt to stick with a winning formula, another 19-year-old Northern Irish singer, Angela Farrell, from Armagh, was selected to sing the Irish entry on home turf.

Farrell had secured her slot ahead of competition from Red Hurley and Sonny Knowles in that year’s National Song Contest, but sadly the singer and her underwhelming One Day Love song could only limp in 11th out of the 18 entries in Dublin.

But it was yet another Northern Irish singer who dominated the headlines when Eurovision first came to Ireland. As Irish writer John Kennedy O’Connor notes in his book The Eurovision Song Contest – The Official History, the BBC had severe concerns about how the UK’s singer would be received by an Irish audience that particular year.

The Troubles had gripped Northern Ireland and in April 1971, the introduction of internment and Bloody Sunday were just months away. In what some term a cynical political move, the BBC selected a Northern Irish Catholic singer, the already famous Clodagh Rodgers, to sing the UK entry in an effort to defuse the tension.

As Rodgers told the Dublin media at the time: “Here I am, a good little Catholic girl representing the United Kingdom in Dublin.” Years later, she claimed that she had received death threats from the IRA for singing for the UK.

On the night though, it was Rodgers’s attire that was the main subject of conversation. She was dressed in tight-fitting spangled hot pants which showed off her famous legs – famous because she had had them insured for £1 million.

As Maeve Binchy noted in this paper while reporting on Dublin’s Eurovision week: “Every foreign woman seen around Dublin this week seems to have an entire wardrobe of just hot pants”.

The UK came fourth on the night (despite Ireland giving them a very generous seven points) but the musical highlight was the winning song. The French singer, Séverine, representing Monaco, won with what many Eurovision purists argue is the best Eurovision song of all time: Un Banc, Un Arbre, Une Rue (A Bench, A Tree, A Street). Abba’s cartoonish Waterloo can’t hold a spandex jump suit to it.

Séverine’s song still holds the record for receiving the maximum score (douze points!) from the most voting nations. It made such an impression on Irish ears that it flew straight into the Irish Singles Chart at number three post-Eurovision.

It was Monaco’s first and still only Eurovision win – although relations between the country and Séverine became somewhat strained when the French singer said after the competition that she had yet to even set foot in the principality and had no plans to do so.

For RTÉ, broadcasting the Eurovision from Dublin was a huge technical and creative undertaking. As the station noted at the time, the song contest “was being broadcast to a thousand million viewers in 29 different countries”.

It was only the second time that RTÉ had done an outside broadcast in colour – the first had been earlier in 1971 for the GAA Railway Cup finals.

The reassuring figure of Bernadette Ní Ghallchóir (familiar to TV viewers as the face of the Buntús Cainte programmes) presented the show and making his debut as a Eurovision commentator in the Gaiety that night for BBC Radio 1 was Terry Wogan.

The Celtic League group criticised RTÉ for not having the Irish entry sung in Irish.

The Irish Women’s Liberation Movement protested outside the Gaiety on the night handing out leaflets which read “The women of Ireland have little to sing about” and pointing out to foreign delegates that if they had brought contraceptives with them into the country, they would be liable to prosecution under the country’s contraception laws.

A group of RTÉ trade unionists also protested saying “the Eurovision involved RTÉ in needless expenses which it could ill-afford”.

A promotional video highlighting the wonders of tourism in Ireland, shown during the ad break, was criticised as a wasted opportunity, opting as it did to focus on Bunratty Castle and “a man talking about snuff”. The Irish Council Against Blood Sports were particularly incensed about this video as it also contained footage from an Irish fox hunt. They too would be outside the Gaiety holding placards on the night.

It’s tempting to imagine that there were more people outside the Gaiety protesting against the Eurovision than there were sitting inside it listening to the songs.

But Eurovision 1971 is still regarded as an unqualified success. And historically, one of RTÉ’s most impressive achievements.

But if you happen to be passing by the Gaiety Theatre with its 1971 memories of Séverine’s beautiful winning song and Clodagh Rodgers’s spangled hot pants, you’ll notice that the play currently running in the venerable theatre is written by the woman who kept readers of The Irish Times happily chuckling all Eurovision 1971 week long with her humorous reports: the great Maeve Binchy.