How to be Sound: A glimpse into ‘influencer’ culture 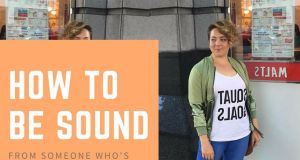 For anyone who has an ear to influencer and online culture in Ireland, Rosemary Mac Cabe provides a sharp and interesting look behind the scenes.

How To Be Sound, Episode 7

On this episode of Rosemary Mac Cabe’s bright and chatty podcast, Mac Cabe interviews skincare guru and beauty blogger Caroline Hirons. The first few minutes of the podcast throw the listener straight in – it’s exactly like pulling up a table beside two particularly interesting people over a brunch. There’s little to no introduction, as listeners we are thrown straight into a discussion – I enjoy this unscripted, organic approach to interviews, but it may take a few minutes to adjust to. Hirons has a vast Instagram following, as does Mac Cabe – and the conversation they have over the course of the easy half-hour eavesdrop of this podcast deals with the social politics of performing a life online and the ins and outs of influencer culture. To listen to two women talking about the ethics of sponsored online content and the weight of money versus integrity is a really refreshing thing.

Ireland’s influencers are a social class somewhere between civilian and celebrity: these influencers have been growing hives of devout followers on Instagram and Snapchat for years. The vast majority of these followers are young women – a powerful consumer group, so it’s no surprise that consumer culture thrives on social media. The influencers doing the influencing have in some regards a lot of responsibility in terms of what they are selling and with what degree of authenticity: and Mac Cabe and Hirons dive into this topic without pulling any punches. This is how capitalism operates in the age of Instagram: and this conversation feels like a real inside view onto what it means to work and earn in that world.

In many regards this conversation is about tech and culture: Hirons discusses what it is to be a mother to teenagers while having your livelihood hinging on being visible online. She doesn’t shy away from talking about how that impacts them, for example, and advises Mac Cabe warmly on dealing with trolls and negativity in online spaces. The subject of cosmetic surgery arises and the pressure on women with online followings to have flawless skin and appear eternally underage: neither Mac Cabe or Hirons engages in any sort of shaming of young women who do engage in it, however they do speak frankly about how prevalent it has become in Irish culture. Hirons voice is husky from, she tells us, days of events, but the darkness with which she says, “There is no such thing as preventative botox” was not only extremely funny but also deeply wise.

It’s refreshing to peer behind the curtain of perfectly curated Instagram accounts, or glamorous-seeming press events which have a very different reality for those running the show. It’s heartening to know that nobody is really drinking skinny-detox tea. For anyone who has an ear to influencer and online culture in Ireland, Rosemary Mac Cabe provides a sharp and interesting look behind the scenes.

November 1918: The German Revolution – Authoritative study of a year of turmoil
8

Dennis Cooper: the last literary outlaw in mainstream US fiction
9

Culture Shock: What next? Blow up Mount Rushmore?
10