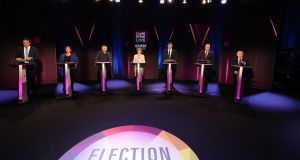 The debate was held at the National University of Ireland in Galway and broadcast live on RTÉ television.

Moderated by Claire Byrne, it began with spiky exchanges between Fianna Fáil leader Micheál Martin and Sinn Féin leader Mary Lou McDonald over the question of coalition and questions about a pledge by Sinn Féin candidates to obey the party’s ard comhairle as elected representatives.

Ms McDonald said Fianna Fáil and Fine Gael were “arrogant, obnoxious even” in refusing to speak to Sinn Féin about forming a coalition government.

Labour leader Brendan Howlin suggested that parties of left get together and negotiate as a group in order to form a government.

The leaders went on to rehearse familiar positions on housing, crime, tax and a variety of issues, with most of the leaders drawing applause from the audience at various points.

Mr Varadkar defended his party’s Help to Buy Scheme, and said: “We have already doubled the supply of housing, and I can double it again.”

Mr Ryan said the polices of Fine Gael and Fianna Fáil – which is proposing a savings up scheme for first time buyers – mean “you might as well give the cheque to the developer.”

Mr Boyd-Barrett drew loud applause when he criticised the sale of property by Nama to investors and vulture funds. He also called for cheaper mortgages to be made available by Irish banks.

Answering charges that he was complicit in allowing the housing crisis to escalate by keeping Fine Gael in government, Mr Martin said he had refused to bring down the government because of the threat of Brexit.

Mr Varadkar strongly defended his plans for tax cuts and insisted that they were prudent and affordable.