‘I thought we had a winning hand,’ the former British prime minister tells the BBC 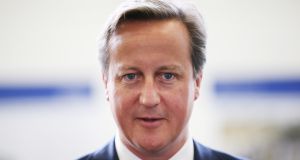 ‘Well, that didn’t work out, did it?’ Cameron said to colleagues the morning after the Brexit vote. Photograph: Peter Macdiarmid, WPA Pool /Getty Images

All political careers end in failure, we know, but that is where The Cameron Years (BBC One, Thursday, 9pm), a two-part documentary on David Cameron’s fateful tenure as Britain’s prime minister, must begin.

“Well, that didn’t work out, did it?” Cameron said to his Remain campaign colleagues on the morning after the Brexit referendum, as his former communications director Craig Oliver remembers.

This, an ironic understatement characteristic of Cameron’s dark comedy in defeat, might have supplied the episode with a more fitting title than “A huge fight on my hands”, not to mention a pithy summation of his premiership as a whole.

If the public perception of his handling of Brexit – never mind his decision to reduce such a complex and toxically divisive issue to a single In/Out referendum - is one of Nero fiddling while Rome burns (or whistling his resignation while Britain implodes) Cameron is not oblivious to it.

In the memorable words of EastEnders star and ad hoc political commentator Danny Dyer, featured here in the aftermath of Brexit, “So what’s happened to that twat David Cameron who called it on? Where is the geezer?”

With ample time to think, the geezer in question is full of regrets but stops shy of self-abasement. “I’d hate the idea that people think I don’t worry desperately about the decision I had to take.” Heaven forfend.

With the 2009 euro crisis encouraging the anti-Europe hysteria of bothersome backbenchers such as Jacob Rees-Mogg (now tiresome, reclining frontbencher) and the EU sidelining Britain’s veto against international bailouts, a humiliated Cameron put Brexit on the agenda.

When Oliver asked if there might be any persuasive reason not to do this, Cameron replied: “Because you could unleash demons of which ye know not.” That, sadly, was the precise incantation that summons Michael Gove and Boris Johnson from their respective hellmouths.

Various speakers attempt to pin down a single moment that changed the course of history, from Gove’s bitterness at being demoted in 2014 to Johnson’s tactical dithering. “In the end, I think he was putting his political career ahead of the interest of the country,” Cameron chances of Johnson’s defection to Leave.

But Cameron’s knee-jerk apologias and meagre mea culpas (“I thought we had a winning hand and I didn’t seem to be able to play it”) together with his mildly passive aggressive review of the Leave strategy (“I suppose in this post-truth world it was quite a clever campaign”), don’t deepen any sense of a him as something other than a flip short-term strategist with no firm convictions.

Perhaps nostalgically, the documentary tries to give this recent political history the gravity of noble tragedy rather than the shape of a sorry farce. That, however, is as convincing as Cameron’s last words on the subject, believing Brexit “can be delivered, should be delivered, and that we can make it work”. Oh, David. Who are you trying to kid?