Britain submits ‘technical non-papers’ which reflect the ideas the UK 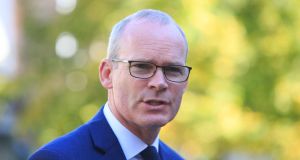 Tánaiste Simon Coveney has issued a “dose of reality” about the prospects for a Brexit deal. Photograph: Collins

Tánaiste Simon Coveney has issued what he called a “dose of reality” about the prospects for a Brexit deal after suggestions by DUP leader Arlene Foster in Dublin last night raised hopes of a Northern Ireland-only solution to the Brexit stalemate.

“There has been a lot of talk in the last few days about intensive efforts, progress being made, flexibility being shown. Let me just introduce a dose of reality here: there is a significant gap between what the British government has been talking about in terms of their approach and what the EU is able to accept,” he said.

Britain on Thursday submitted some proposals in writing of how it would like the stalled Brexit deal to be amended, a spokeswoman for the European Union’s executive Commission said. “We have received documents from the UK and on this basis we will have technical discussion today and tomorrow on some aspects of customs, manufactured goods and sanitary and phytosanitary rules,” said Commission spokeswoman Mina Andreeva. She added that the EU and British Brexit negotiators, Michel Barnier and Stephen Barclay, will also discuss Brexit in Brussels on Friday. “These are papers for now. Until we have looked at them in detail, I will not characterise them beyond being a paper,” Ms Andreeva said.

The UK side said it had shared with Brussels “technical non-papers which reflect the ideas the UK has been putting forward,” without going into further detail. “We will table formal written solutions when we are ready,” a British government spokeswoman said. Ms Andreeva added that there was no formal deadline for Britain to submit formal proposals but stressed that every day counted now as the Brexit date nears on October 31st.

Mr Coveney was speaking at Iveagh House this morning at the launch of a campaign to promote Ireland in Japan during the rugby world cup.

DUP leader Arlene Foster had indicated on Wednesday night that her party could accept special arrangements for Northern Ireland after Brexit as long as they did not affect the North’s position in the UK.

Ms Foster said there were solutions to the Brexit impasse that involved special treatment for Northern Ireland but did not affect the constitutional position of the North.

However, she said such arrangements would have to be supported by politicians in the North.

Asked if Northern Ireland-specific solutions were possible if they did not affect the constitutional position of the North, Ms Foster said: “Well, I hope so, because what we want to see working ... I think what we want to see is a recognition that we are on an island. We do recognise the unique history and geography, but we also have to recognise that we are in the United Kingdom. ”

The DUP leader was in Dublin to address the Dublin Chamber of Commerce annual dinner. In her speech, she said solutions could be found which did not damage the integrity of the single market, but also did not “erect new barriers to trade within the UK”.

Afterward, she met Taoiseach Leo Varadkar for 45 minutes at Government Buildings where discussions centred on Brexit.

Asked about the Taoiseach’s meeting with Ms Foster, Mr Coveney said: “The meeting with the Taoiseach was positive, it was friendly. It didn’t solve all problems. And I think we need to be careful that this doesn’t get interpreted as some kind of breakthrough, because I don’t think it is.

Asked why the British had not provided written proposals, Mr Coveney replied, “I can only assume they’re working on it ... But it’s getting very late in the day.”

Chancellor of the Exchequer

Meanwhile, the British Chancellor of the Exchequer Sajid Javid is in Dublin today to meet Minister for Finance Paschal Donohoe.

Speaking as the two men went in to Farmleigh House, Mr Donohoe noted it was the third time they had met in recent weeks and that the two men had “built up a really strong and really important relationship”.

Mr Javid said he was “very pleased” to be in Dublin.

“Whatever happens next with regard to Brexit it is essential that we not only maintain the strength of the relationship between our two great countries but that we find ways to enhance it and that’s exactly what I want to talk about today,” he said.

Mr Javid did not take questions about the speech given in Madrid on Thursday by Brexit Secretary Steve Barclay in which he warned of possible medicine shortages in Ireland after a no-deal Brexit.

Government Buildings has also confirmed that Taoiseach Leo Varadkar will meet British Prime Minister Boris Johnson in New York next week, where both will attend the UN General Assembly.