Miriam O’Callaghan runs close to caricature of herself

Review: By the end of a compelling interview, O’Callaghan positively embraces her self-parodying side 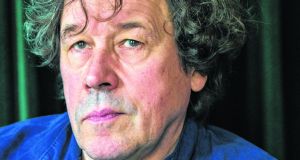 At a time when so many current leaders on the world stage are fantasists peddling harmful fictions, it’s perhaps surprising that some of the most truthful voices on the airwaves should belong to those who make things up for a living. Then again, there are few people who understand the power of playacting better than theatre practitioners, while their motivations are more noble and grounded than those politicians who have trouble separating illusion from reality.

Certainly, listening to Gate Theatre director Selina Cartmell talk to Richard Curran on The Business (RTÉ Radio 1, Saturday), one can’t help feeling that if all public representatives had her sense and imagination things wouldn’t be in such a mess. While Cartmell’s creative talents seem obvious, the fact that she’s appearing on Curran’s business magazine show is testament to her more practical abilities.

She tells her host about the challenges of running a theatre while dealing with the fallout surrounding the sexual harassment allegations against her predecessor, Michael Colgan. It’s not especially sensational stuff, but oddly it’s her prosaic pragmatism that’s striking. Such qualities too are often missing in the political arena.

There’s a different dramatic twist on Sunday With Miriam (RTÉ Radio 1) as Miriam O’Callaghan talks to actor Stephen Rea, who is being honoured at the Dublin Theatre Festival. It’s a compelling encounter, and not just because it’s a roll call of the tics and tricks that have made O’Callaghan such a favourite with comic impressionists.

There are the hums of empathy and approval which greet her guest’s answers and the fluttery flattery that peppers proceedings: “You look great,” she tells Rea, who repays the compliment with knowing good humour.

As for Brexit, it’s telling that Rea lets out an anguished howl

At other times, the presenter’s questions sound like they come from some class of Random Platitude Generator app. When Rea talks about growing up in 1950s Belfast, where his father was a bus driver, O’Callaghan asks, “Was your dad happy?” “Are you kidding?” replies Rea incredulously.

Later, the presenter appears to lapse into full auto-pilot mode. “Are you religious? Spiritual?” she inquires, the lack of conviction in her voice suggesting that even she can’t quite believe what she’s asking. Rea gamely engages with his host’s questioning, noting that while he can’t imagine an afterlife, his sister, “a mad spiritualist” once reassured him that his parents met each other again after they died. “It was like they’d been in some waiting room,” he says, fondly. By the end, O’Callaghan positively embraces her self-parodying side, inquiring of her guest, “Do you wake up happy?” “Let’s not go too far,” comes the wry reply.

But all this is underestimated O’Callaghan’s tactics, for her approach yields an enjoyable and absorbing interview. She disarms Rea’s lugubriously diffident public persona, and instead teases out the reflective artist with an impish sense of humour. Rea is alive to what’s happening, noting with mock-alarm that his host has “a way” of getting him to talk about personal subjects.

It’s not all larks. Rea emphasises his outrage at the conditions in which people are held in Direct Provision, calling it “our Magdalene laundries”. (Full disclosure: he also reads a poem by my father, Seamus Heaney.) As for Brexit, it’s telling that Rea lets out an anguished howl when O’Callaghan brings up “the B word”. (Jones has earlier sighed deeply when the subject arises.) But it’s an honest reaction, one which only emphasises Rea’s hangdog integrity.

Speaking of honesty, there’s no danger of any trade descriptions acts being violated by the title of the Documentary on One: Brendan Behan in Paris (RTÉ Radio 1, Saturday). Produced by Tim Desmond and Deirdre McMahon, who also narrates, the documentary does indeed retrace Behan’s several sojourns in the French capital, to the exclusion of the rest of his career. If this isn’t niche enough, McMahon observes that very little is known about this particular phase of the late Irish author’s life. But the programme nonetheless lends a revealing glimpse of the man behind the hellraising persona, aided by previously unheard recordings of Behan from 1961.

Behan’s output in Paris was sparse but significant. He wrote some poems in Irish (Pernod is a predictably recurring motif) and published a few short stories in Point, a literary magazine run by Sindbad Vail, a scion of the Guggenheim dynasty. Meanwhile, Behan socialised with authors such as Albert Camus, James Baldwin and his compatriot (and ostensible temperamental opposite) Samuel Beckett. Even then, he was honing the gregarious personality that would eventually overshadow his writing. “He was big and boisterous,” Vail’s wife Jacqueline Hélion says of Behan, adding wistfully: “We all drank too much in those days.”

There’s the requisite amount of picaresque detail, with Behan recalling how he scavenged food from windowsills. But he also found his voice as a writer, and even as a person. McMahon – whose father adapted Behan’s classic Borstal Boy into a Tony-winning Broadway play in 1970, six years after the author’s death – makes a good case that Paris allowed Behan“the freedom to express his own sexuality in his writing”. One short story from the period, After the Wake, hints at what academic John Brannigan calls “homoerotic seduction”, as does an early take on Borstal Boy, wryly titled Bridewell Revisited.

None of this radically reconfigures Behan’s image, but it does remind listeners that there was more to him than the popular caricature of the drunken rebel squandering his talent. Instead, a different figure emerges: the restless, autodidactic former IRA man who left the strictures of Ireland for the promise of Paris, where there was a wide respect for writers. “In Dublin, they’d shout after you in the streets,” Behan says ruefully. And in its vivid personal sketch and evocation of a bygone Paris, the documentary is also an exemplar of radio’s unique ability to take potentially sketchy material – an offbeat subject, a few archive clips – and turn it into a mood piece that transports its audience.

Radio Moment of the Week: Marty makes his mark

The entertainingly baffling world that is Marty in the Morning (Lyric FM, weekdays) never ceases to amuse and even amaze, at least once you surrender to his singular blend of mainstream music, irresistibly naff jokes and bizarre conversational turns. (He recently described his patter “all stream of consciousness”, but it’s more like a surging river.) On Tuesday, for example, he introduces a track thusly: “How about a little Lang Lang?” he says, referring to the Chinese pianist. “I don’t know what I’m offering you, except it’s a musical treat.” Groan. Cue an auld Lang sigh.