Weekend TV guide: 13 of the best shows to watch 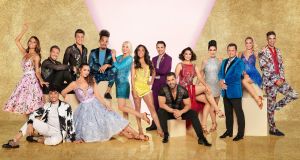 The Late Late Show
Friday, RTÉ One, 9.35pm
Laura Madden, the Monaghan-born former film executive who was one of the first women to go public with allegations of sexual abuse against film producer Harvey Weinstein, joins Ryan Tubridy to discuss her experiences working with Weinstein at Miramax in the early 1990s. Also: In celebration of the Dublin Senior Footballers’ 5-in-a-row, Dean Rock and his father Barney Rock, a former Dublin player, will be in to chat about Dublin’s historic win, while rugby legend Shane Byrne helps us kick off the Rugby World Cup, Japanese style. Plus: TV chef Donal Skehan on life in LA and raising his family there, as well as challenging some audience members to a cook-off; finalists of the Farm Heroes Awards telling their stories before this year’s overall winner is announced; much-loved songwriters Phil Coulter on the future of Northern Ireland before a special performance of The Town I Loved So Well; and more music from English singer-songwriter Freya Ridings.

Inside the Vatican
Friday, BBC2, 9pm
A film crew gains exceptional access to the Vatican and is given a year to examine its inner workings. Cameras capture everyone, including Pope Francis himself, his head of security, the nuns who cater for the homeless, the choristers of the Sistine Chapel, the papal gardener and the chief of the diplomatic corps. The result is a unique and exclusive insight into the lives of those who live and work in this independent city state. The first of two programmes follows the build-up to Easter, when tens of thousands of pilgrims arrive and Pope Francis takes centre stage in the world’s biggest theatre of faith.

Margaret Atwood is the author of more than 50 books of fiction, poetry and essays. Her hit novels over the years have included Cat’s Eye, The Robber Bride, Alias Grace, The Blind Assassin and the MaddAddam trilogy. However, it’s her 1985 classic The Handmaid’s Tale, the inspiration of the controversial TV series, for which she is now best known. In the first of a new series of the arts programme, Mary Beard talks to the 79-year-old writer about her career and previews Atwood’s new book, The Testaments, which is set 15 years after the final scene in The Handmaid’s Tale.

Secrets of the Royal Flight
Friday, Channel 5, 9pm
Three teams of modellers are given three days to create masterpieces based on the theme of a best-selling book. The Seven Pillars of Wisdom, by TE Lawrence (aka Lawrence of Arabia), is the inspiration for the Scarborough Flyers. Sci-fi fans the Rail Riders choose HG Wells’s classic War of the Worlds as their muse. And Team Phoenix’s layout is inspired by various tomes by the queen of crime, Agatha Christie.

Derry Girls star Siobhan McSweeney will join Ray D’Arcy to chat about her role as the hilarious and iconic Sister Michael in the hit series. McSweeney will describe her formative years in Aherla, Co Cork and how she gave up a career in science to pursue acting. Also: Kym Marsh will join D’Arcy to discuss her upcoming role in Elf: A Christmas Spectacular at the 3Arena, her forthcoming departure from the cobbles of Coronation Street after 13 years, and her newest role in life: becoming a granny at 42. Plus: RTÉ rugby panelists Bernard Jackman and Stephen Ferris on the latest updates from Japan ahead of Ireland’s opening game; Welsh author, singer, songwriter and BBC Radio 2 DJ Cerys Matthews on her latest venture into cookery books, her unique relationship with Ireland, and how she fell in love with her husband in a Dublin pub; and wedding planners to the stars, Tara Fay and Bruce Russell on their latest TV project.

The ever-popular great British dance-off returns for another whirl, and by now you should have recovered from the glitzy launch show on September 7th, at which all the new contestants were unveiled. And what a starry lot they are. There’s someone from EastEnders, someone who used to be on Coronation Street and someone who played third policeman from the left on Hollyoaks. There’s a good smattering of sporty types, including former England goalkeeper David James, former footballer Alex Scott, former Olympic rower James Cracknell, and a sports presenter whose claim to fame is falling into a swimming pool on live TV. There’s a YouTube star and a posh socialite, and the fabulous Michelle Visage from RuPaul’s Drag Race, on loan from Celeb BB. But the celeb we’re really excited about is Anneka Rice, the star of 1990s show Challenge Anneka. We still quiver at the memory of her hopping onto a helicopter in her trademark jumpsuit. Forget the sequins – if Anneka digs out the jumpsuit to do a dance routine, we’ll be up for that challenge.

Nomad: In the Footsteps of Bruce Chatwin
Saturday, BBC2, 9.45pm

When writer and adventurer Bruce Chatwin was dying, he asked his friend and collaborator, the legendary German film-maker Werner Herzog, to view his recent film about tribesmen of the Sahara. He then gave Herzog his rucksack, which accompanied him on travels around the world, as a parting gift. Now, 30 years later, the director of Fitzcarraldo and Grizzly Man is taking the rucksack on a new journey, inspired by his and Chatwin’s shared passion for the nomadic life. It’s a mission that takes in Patagonia, the Black Mountains of Wales and the Australian outback as Herzog uncovers stories about dinosaurs, lost tribes and Aboriginal traditions, and explores what inspires humans to wander.

The second of four comedy pilots, any one of which could end up becoming a series if the audience reaction is positive. Last week’s showcase, Bump, was a tale of two sisters brought together by one baby. This week’s pilot tells the story of two stepsisters, Row and Finn (Kate Kennedy and Louisa Harland), who are thrown back together when their dad (Owen Roe) has a heart attack. With dad unable to work, the pair decide to start up their own DIY business, Handy Girls, and start looking for nixers.

Méabh O’Hare’s two-part Irish-language documentary, which premiered in June at the Belfast Film Festival, explores the life work of the Coleraine musicologist. Sam Henry (1878-1952) was an antiquarian, lecturer, writer, photographer and folklorist who played the fiddle and the tin whistle. He began collecting songs and taking photographs while working as a customs and pensions officer, and eventually recorded the world’s largest and most comprehensive collection of traditional Ulster songs (some 800), called Songs of the People. The programme includes interviews and performances from leading singers and folklorists.

Tories at War
Sunday, Channel 4, 10pm
Filmed over the course of nine months, this documentary tells the inside story of Brexit and the British Conservative Party, hearing from cabinet ministers, Brexiteers and Remainer rebels. It begins in January, as then-prme minister Theresa May battles to sell her withdrawal agreement to an increasingly sceptical House of Commons, and ends with her successor, Boris Johnson, facing his own string of defeats. According to one minister: “The sadness of this documentary is that you are mapping the day-to-day slow death of the most successful political party in democratic history – and it’s entirely self-inflicted.”

Bergman: A Year in the Life
Sunday, BBC4, 9pm

Jane Magnusson directs and narrates this sensitive yet unflinching documentary that exposes the darker, less well-known side to one of the most famous figures in world cinema, Ingmar Bergman. Focusing on 1957, a landmark year in which the incredibly prolific Swedish writer-director worked on two films and four plays, A Year in the Life explores not only Bergman’s films, but also his complex personality, his strengths and failings as a man, and the way his art derived from his life. Bergman’s 1957 historical fantasy The Seventh Seal follows at 10.55pm.

Bounty hunters have been part of the US justice system since the 1800s, but should they still have a role to play in the 21st century? Stacey Dooley follows a group of hunters as they track down fugitives who have skipped bail. These hunters have sweeping powers and, in all but four states, nearly anyone with very little training can pick up a gun and track down fugitives, with some going to extreme lengths to capture their quarry. It leaves Dooley asking whether it’s the poor and vulnerable who pay the highest price for the bail industry.

Sam and Billie are back. Following on from the last five series, the sibling sisters once again throw open their doors. The countdown to Nelly’s fifth birthday has begun and Billie is planning her biggest party yet, but Nelly has some definite ideas of her own. Billie and Greg decide it’s time for the Shepherd household to have a digital detox and with Greg’s celebrity profile on the rise, the newlyweds are booked for their first job together. Over in Hertfordshire, the Faiers-Knightleys talk marriage and baby number three.