Dancing with the Stars: Questions must be asked over judging criteria

Denis Bastick is eliminated, even after his dance-off opponent falls over his shoelaces

Pro dancer Vitali Kozmin trips on his shoe laces during the Dancing with the Stars dance-off, but his partner Clelia Murphy survives as GAA star Denis Bastick is voted off by the judges instead. Video: RTÉ 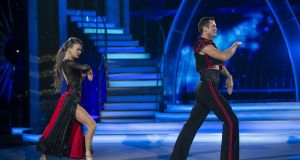 There are tears, twirls and one fateful tumble as footballer Denis Bastick is eliminated from Dancing with the Stars following a hoof-off against actress Clelia Murphy. Bastick exits on a 2-1 vote from the judges, with Loraine Barry delivering the crucial casting vote.

Yet for the second time in three weeks questions surely have to asked about the criteria by which contestants are being assessed. A fortnight ago Fred Cooke survived his dance-off despite falling to the floor. We witness almost an exact repeat tonight as Murphy’s pro partner, Vitali Kozmin, trips on his shoelaces.

Until that moment Murphy seems odds-on to continue as she is posted consistently higher scores than the earnest yet slightly lumbering Bastick. So justice is arguably served in the end with the All Ireland medallist hitting the road. And yet, if crashing to earth isn’t enough, you have to wonder what is required for a fancied competitor to lose a dance-off.

The other big talking point is an emotive appearance by Love/Hate actor Johnny Ward, who dances the day after his father died. He does so to fulfil the final wishes of his dad, and his salsa is a sizzling, heart-string puller.

With just four episodes left, Dancing with the Stars has arrived at the squeaky bum stage in earnest.

And Bastick will be missed for his no-nonsense charisma. Of all the contestants, he is the one who took the competition seriously – but not too seriously. However, viewers will be relieved Murphy lives to hoof another day as it would be a travesty for her to exit ahead of next week’s quarter-finals.

Following Orchestra Night, DWTS also returns with a new gimmick– the team dance. Celebs are divided into two sides for a stony-faced dance-off, with the performances taken into account in the final tallying.   On “Team Past” are Murphy, Bastick and Cliona Hagan. They are doing their thing – or at least doing something – to a remix of All That Jazz.

“You really highlighted our two lady celebrities and also our gentleman celebrity,” says an uncharacteristically formal Barry. Julian Benson, returning after illness, praises the Bob Fosse choreography, though for a moment there we think he’s praising the “flossing”.

Team Past – is that the best the producers could come up with? – earns 29.

Up against them is the unlikely tag trio of Fred Cooke, Mairéad Ronan and Johnny Ward, stomping about to Born This Way by Lady Gaga. “That was one Gaga-licious performance,” says Benson, praising in particular “the use of the lightbulbs” (to be fair, the lightbulbs are impressive). Future score 26 – three behind Team Past.

First up in the competition proper is country singer Hagan. She is still glowing after clocking up the season’s first clean sweep of tens last week. Or maybe that’s just us, dazzled by her banana-hued dress, topped off, of course, with banana-hued bandana. Under the merciless RTÉ studio lights, she looks like a radioactive Big Bird.

Her salsa with Robert Rowinski unfolds to Thalia’s Mujer Latina and receives the now standard extravagant praise (with some very mild fault-finding from Brian Redmond).

“This was a huge production… huge,” says Loraine Barry. “You performed it from the face,” adds Julian Benson, and we are evidently to take that as a compliment. “The fluidity!”

She receives a score of 25 – and a cake and balloons to mark her 30th birthday. We also learn that pro dancer Rowinski took a trip to Tyrone with Hagan during the week and had his first taste of Irish potato stuffing. It’s the little details that make Dancing with the Stars worth staying with.

Then it’s Mairéad Ronan, another of the pace-setters early doors. To brighten her mood there’s a surprise visit during rehearsals from home improvement deity Dermot Bannon.

Ronan dances smoothly with John Nolan (coincidentally, and actually spookily now that we think about it, he is a dead ringer for Bannon). The soundtrack is Robbie Williams’s Beyond the Sea (obviously the Williams version should be retitled “Get in the Sea”).

“You definitely deserve that spice bag,” enthuses presenter Jennifer Zamparelli. “I’d go cruising with you any time,” chimes Benson, though with a caveat. “One little thing – you need to watch that free arm. But very nostalgic and well done.”

Redmond is less enthusiastic. “More Cross Channel Ferry,” he says, adding that Ronan needs to give heed to Benson’s repeated feedback regarding her arm positioning. “You should start listening to Judge Jules.’ Her result – a choppy 22.

Following are Clelia Murphy and Vitali Kozmin, delivering a Charleston to Got Rhythm by the Puppini Sisters. For the uninitiated, the Puppini Sisters are the most annoying band in the history of recorded music – even more annoying than Robbie Williams getting in the sea. Fortunately none of that seeps into the dance, featuring a jar of lemons and Kozmin done up like a scary plasticine Don Draper.

Their reward is a standing ovation and vindication for Murphy, required to participate in an elimination dance off the previous week. “Swell girl. You got rhythm,” says Benson. “It was fun, flirty, sexy, cheeky.”

Her 26 whooshes her temporarily to the top of the leaderboard.Bittersweet considering she’s about to face into another dance-off.

Bastick, in what will be his last regular dance, is taking on the paso doble. He’s lost his shirt – but fortunately pro dancer Milova is on hand with a replacement. After that there’s lots of twirling, swirling and clapping – with which Bastick, having played in front of Hill 16, will no doubt be familiar.

“Denis, I cannot cope. This was a power-punching paso. You gave me great face,” says Benson. He slots it over the bar, scoring 24 – not a terrible figure on which to exit.

Some light relief is next provided by Fred Cooke , the resident Honey Monster who has emerged as bit of a dark horse. Despite a stuttering beginning to the competition, Cooke, the judges hinted last week, might be in the running to become overall champion. He and Giulia Dotta perform a waltz to the lulling stains of Joe Cocker’s version of With a Little Help from My Friends.

“The problem with a swing is that not only does it go up. It comes back down,” tuts Brian Redmond. “Choosing not to do the intricacies of the footwork… is a little bit like cheating.”

Cooke scores 20 – not shabby but a disappointing so far into the competition. Obviously sheer likability is keeping him in the running.

After that it’s an emotive turn from Johnny Ward. He executes a powerful samba accompanied by pro dancer Emily Barker and an Ed Sheehan remix. Simply by participating he deserves his the applause – but the judges praise the performance too.

“You didn’t have to dance tonight – the bravery you showed..as a father and son myself, is something I know your father would be proud of,” says Redmond.

He adds that he will give an honest assessment, as that is what Ward will want. “It was very, very good.,” he says. “A striking start,” adds Loraine Barry, though she critiques the fact that his feet were wider than his shoulders.

“It’s been a very difficult week” says Ward, blinking away tears as he recalls his father urging him to remain in the competition. “It’s not like competing against people – it’s a family.” He scores a glittering 28.

Zamparelli and Nicky Byrne are in lively fettle throughout. The gags are still more hit than miss. But Byrne is empathetic interviewing Ward about his father, without laying on the maudlin or reducing the actor’s grief to soppy sensationalism.