Dancing with the Stars: Peter Stringer voted off after dance ‘you’d see at a wedding at 4am’

Review: Rugby ace is ‘out of time, out of sync, out of balance’ and out of the show 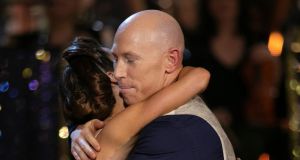 Peter Sringer the moment he was voted off Dancing with the Stars. Photograph: Kyran O’Brien

Violins swirl and cellos chirrup as “Orchestra Night” returns to Dancing with the Stars. There’s a deafening conclusion, too, as rugby ace Peter Stringer is voted off in a twirl to the death against Clelia Murphy.

The departure of Stringer and pro dance partner Ksenia Zsikhotska makes for a tense finish, the action soundtracked with fitting bombast by the RTÉ Concert Orchestra.

Additional drama is provided by the appearance, during Murphy’s dance-off, of a mysterious tambourine. This will have hopefully prompted someone in the production booth to scream, “Hey Mr Tambourine Man, clear the floor for me”.

Spontaneously manifesting tambourines are one thing. But we are at least spared a repeat of last week’s controversy in which Fred Cooke was bafflingly granted leave to remain in place of Demi Isaac Oviawe.

“You have two choices, either you get up on your feet and go again,” says Cooke, waxing humble about the mid-dance tumble which many feel should have led to his exit. “The second is to go Longford and cry for three days.”

It would be a howling overstatement to ever describe Dancing with the Stars as a high-class affair. Nonetheless, the evening’s orchestral manoeuvres near the Dart make a change from the gale-force tackiness intrinsic to the show (and, let’s be honest, part of the charm).

First out of the traps is frontrunner Mairéad Ronan, dancing a samba with John Nolan to Barry Manilow’s Copacabana. But did her team imagine the song is actually titled Copa-banana? It is the only explanation for the matching lurid yellow into which she and Nolan are belted (the performance is obviously dedicated to Ian Dempsey’s dog, Lola).

“You’re like something they put in my drink on holiday,” says Jennifer Zamparelli of the costumes.“I wanted more hip… I wanted you to hit it more…,” chimes judge Loraine Barry.

“Mairéad – the showgirl you really got this party started… cheeky flirty fun,” says Darren Bennett, in once again for the poorly Julian Benson. Still, there’s a sting. “I would have liked a little more aggression in those hips.” She earns a steady-as-she-goes 21.

Next it’s Denis Bastick and Valeria Milova fox-trotting to Someone Like You by Adele. Dancing to Adele is a bit like taking life lessons from the lyrics of Mumford and Sons. Someone out there has probably tried it but you’re glad it isn’t you. Nonetheless, Bastick – who, as a veteran of the Leinster Championship, knows a few things about plodding around in slow-motion – owned the moment. “The story and the music… I felt you could get into the essence of the dance,” says Bennett, continuing to impress as substitute adjudicator.

“It made me want to be out there in your place,” agreed Brian Redmond. “Your best dance.” Bastick’s score is a stonking 23.

Clelia Murphy can consider herself unlucky to place in the bottom two by public vote. She delivers a more than passable paso doble to Ricordi’s Funiculì, Funiculì. “It was like a duel… I liked it very, very much,” says Barry. Redmond is positive too, congratulating Murphy for bringing a greater dash to her dancing. She scores 25.

Peter Stringer follows and, opting for a nontransparent shirt this week (thank you Peter, thank you), delivers a swerving American smooth, to New York, New York.

“Sorry I’m late. I had to do the triangle while your man went to the loo,” says a breathless Zamperelli as the applause rains down. This sounds almost like a euphemism. While we’re being frank, Jennifer could you please stop saying “oh my days”. It is so very annoying.

“That skyline to New York needs to be more, more more…” Loraine Barry tells Stringer. “Lights, camera action... Broadway,” says Bennett, which sounds like a compliment but – hang on? – isn’t’t it. “The orchestra which such a powerful sound doesn’t quite work for you… you’re not quite with it.”

The boos ring out in earnest as Redmond likens Stringer’s efforts to what you might see at a wedding at 4am. “Out of time, out of sync, out of balance.” Strings fumbles the ball with a score of 20.

A bit like Ireland v Italy, though, there is redemption at the death. Stringer restores some pride in the dance off, with Redmond describing his improvement as among the best he’s witnessed on DWTS. Alas, it’s not enough and all three adjudicators hand the win to Murphy.

Johnny Ward has arguably been the year’s outstanding contestant. But he’s also the one who looks as if might spontaneously catch alight from sheer over-enthusiasm. He’s back to his jittery best as he rattles through a tango with Emily Barker. Ward does so to the accompaniment of Viva La Vida by Coldplay. Nobody, it is fair to state, has ever look quite so excited listening to music composed by Chris Martin (not even Chris Martin).

Another contender is country singer Cliona Hagan, waltzing with Robert Rowinski to A Time for Us by Nino Rota. They dazzle – or perhaps that’s just Robert’s gleaming white suit. “You look like you’re making your first Holy Communion,” Nicky Byrne accurately points out. No… actually it isn’t just the suit, as the judges are quick to confirm. “You really stepped up – if you keep putting performance like that in it could be a time for you,” says Brian Redmond.

“You both made that look easy tonight,” agrees Loraine Barry. “What I really want in great dances is to become the dance, to be the music.” The first clean sweep of perfect scores from the judges sets the leaderboard ablaze.

The evening’s punchline is then provided by Fred Cooke, notching up a resounding 24. He’s jiving to Elton John’s I’m Still Standing. Ha, ha, yes we see what you did there, Fred. But goodness, you were tempting fate. Imagine how silly you’d have looked falling over two weeks running.