Dancing with the Stars: Mary Kennedy eliminated in knuckle-whitening conclusion

As quarter-finals loom, this is turning into the Hunger Games with bonus face glitter 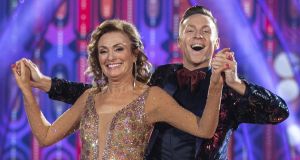 Dancing with the Stars: Mary Kennedy with John Nolan on her final night on the show. Photograph: Kyran O’Brien

It’s an evening of high drama on Dancing with the Stars as Mary Kennedy becomes the sixth contestant to be eliminated from the competition. She receives the boot following a dance-off with Gráinne Gallanagh in a knuckle-whitening conclusion. (If my knuckles were any whiter they would be see-through and I would have difficulty typing this.)

Would the judges spare Mary? Or would they give the nod to Gallanagh, who has improved steadily across the past several weeks? The answer is inevitably that they opt for Gallanagh. If anything the true heart-in-mouth moment comes earlier, as we learn who has placed in the bottom two by public vote. Ooh but it’s tense.

“We decided we were just going to enjoy it,” says Kennedy prior to her exit. “Mary has danced her heart out every week,” her pro partner, John Nolan, says with a nod.

“Mary, you have been our queen of the ballroom,” says Darren Bennett, adding to the snowdrifts of platitudes at Kennedy’s feet. “You have been in inspiration to me and to many others,” chimes in Loraine Barry.

Now just five contestants remain, and we are closer to a clearer idea of who may end up lifting the glitterball trophy. With the quarter-finals looming this is turning into the Hunger Games with bonus face glitter and Nicky Byrne.

First up is Fair City’s Ryan Andrews, who dances with Giulia Dotta to What a Man Gotta Do by the Jonas Brothers.

“What a man’s gotta do is come here week after week and perform like that,” Barry gushes, although she adds that she found the performance a “little bit shouldery”.

“I really enjoyed the upper body – there was a calmness to it,” says Bennett, the show’s creative director, replacing the unwell Julian Benson.

There’s an even bigger surprise when the Jonas Brothers – yes, the brothers Jonas – send their best wishes by video. And then Dotta tries some mangled Irish and all the doors are blown open as, from somewhere, Patrick Pearse screams out in horror. After all that, Andrews scores 27.

Next is the soon-to-be exiting Mary Kennedy, who, along with Fr Ray Kelly, had seemed destined to survive until the business end of the contest owing to national-treasure status.

She does a cha-cha to Young Hearts Run Free by Candi Staton. “Great variety of steps… a little bit out of sync,” says Bennett. “It made me feel a little young at heart… the hip action,” adds Brian Redmond. “There were those one or two mistakes. They didn’t bother me too much tonight.” She receives 18.

Then it’s Gráinne Gallanagh, the model, who, with Kai Widdrington, dances a paso doble to I Would Do Anything for Love (But I Won’t Do That) by Meat Loaf. The routine re-creates the interaction between a matador and a charging bull, with Gallanagh occupying the latter role. (She grew up on farm surrounded by cattle so doesn’t take it personally.)

“It had all the classical paso elements… It could maybe have been slightly contrasted in the attacking movements, but that was the only thing lacking,” raves Brian Redmond. (Had he raved any more he’d have been waving a glow stick over this head and making pyramid shapes with his hands.) “If you can continue to improve in the Latin [dances] you could be a real contender.”

“It’s sort of 16th century, it’s Gothic, it’s a little bit of the French Resistance,” says Loraine Barry, who pronounces “Resistance” as if she’s just been possessed by a Frenchman’s beret. Gallanagh scores 25.

Mystery has raged for years as to what it was exactly that Meat Loaf wouldn’t do in the song. For the Irish voting public the answer is more straightforward: They Would Do Anything for Their Love for Dancing with the Stars (But They Won’t Vote Against Fr Ray).

Speaking of the pirouetting padre, he’s back with Kylee Vincent, dancing a quickstep to I’m a Believer by The Monkees. You see what they did there. The rumour is that next week he’ll be doing a waltz to Jesus Wants Me for a Sunbeam by The Vaselines, followed by Walkin’ with Jesus by Spacemen 3. Let’s get that Twitter campaign started now.

“I love the quickstep,” says Loraine Barry. “A very nice introduction… I was waiting, I was waiting… Let’s be honest, I didn’t quite get the quickstep… Maybe it’s just too fast for you.” Ooh. From the circumspect Barry it’s a proper diss.

“We just have to concentrate on the steps…the actual patterns of the dance,” says a kindly Bennett. “I think you’ve turned us all into believers.”

“He picked up and carried on,” adds Vincent, the pro dancer, referring to a misstep by Fr Ray. He twirls away with a not-especially-shabby 13.

Then it’s the former Kilkenny hurler Aidan Fogarty, who dances a rumba to One by U2. “Is it getting better?” wonders Bono as Fogarty gets stuck into a soul-bearing routine that “no man should expect to”.

Yes, is the answer. “That rumba was so much more fluid – so much internal body movement… So sensitive, romantic… You’re back in the game,” says Bennett.

“Your greatest achievement to date… the nuance, the subtlety,” agrees Brian Redmond. Fogarty impresses with 23.

Last to perform is Lottie Ryan. She received a shock last week when required to participate in a dance-off despite consistently topping the leader board through the season. But the setback clearly hasn’t put her off as she and Pasquale La Rocca deliver a high-energy samba to Tip Toe by Jason Derulo.

“The samba is the hardest dance to do. In the amount of time you had, this is unbelievable,” agrees Barry. “You made it look easy.” She scores 29.

But we’re not done. There’s also the first competitive group dance. With just six contestants remaining, RTÉ has to find a way to stretch the evening out.

So the competitors are divided into teams and challenged to prove they play well with others. It was either that or more banter between Nicky Byrne and Jennifer Zamparelli.

Gráinne and Kai, Mary and John and Ryan and Giulia are the… oh dear…. Rhythm Rebels. They perform a tango to Physical by Dua Lipa while dressed as giant Tetris blocks. Well, it’s novel.

“There was lots of robots,” says Barry, who emphasises her point by briefly impersonating an artificial person. “All spot on… some nice variation,” agrees Bennett. They score 24.

Then come the – groaaaan – Swing Breakers: Aidan and Emily, Lottie and Pasquale and Fr Ray and Kylee.

There are an awful lot of top hats as they perform a charleston to Sing, Sing, Sing by Wolfgang Lohr. “So much energy,” says Bennett. “The interaction was superb. You almost didn’t know where to look.”

“It really enjoyed it – Aidan and Pasquale, it was like a duel,” says Barry. Swing Breakers crush it with 27.

That’s a vindication for Fr Ray, in particular, who tops the leader board for the first time in the season. And after all that there is time just for the dance-off and a farewell to Mary Kennedy. She’s done well across the past two months, but all groovy things must, alas, come to an end.