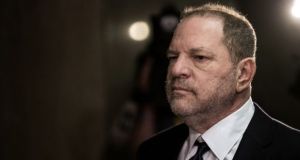 The investigative reporting and led to the conviction of Harvey Weinstein (pictured) for rape and criminal sexual assault would not have been possible anywhere else in the world, says Ronan Farrow. File Photograph: Jeenah Moon/New York Times

The investigative reporting in the US that sparked the global #MeToo movement and led to the conviction of Harvey Weinstein for rape and criminal sexual assault would not have been possible anywhere else in the world, one of the journalists who broke the story, Ronan Farrow, has said.

Ireland’s very restrictive libel regime would have certainly made such reporting very problematic, if not impossible. A newspaper trying to report on the claims about Weinstein, as Farrow did for the New Yorker in 2017, “would have been at very real risk of a successful defamation claim, to the point where it really would not have been possible,” says David Phelan, a solicitor and expert in libel law.

“Part of the reason for that is that our defamation regime is considerably more restrictive in what can be published compared to other regimes, particularly with regard to the US. A news publisher here trying to report on that would have had to prove the truth of the allegations against him, in a way that doesn’t arise in other jurisdictions.”

In effect, the defamation trial would almost have to conducted as a de facto criminal trial.

Other obstacles to that kind of investigative reporting include the very high level of defamation awards made in Irish courts, contributing to fears that the Irish courts are becoming a destination for so-called “libel tourism”.

Has the internet made discussion about a need for reform of our libel laws less relevant anyway? Not necessarily.

Despite the impression that social media can be something of a free-for-all, the same defamation laws apply online – even if it is sometimes more difficult to track down the source of publication.

NewsBrands Ireland, the representative body for Ireland’s news publishers, has been campaigning for reform of Ireland’s defamation laws. A review by the Dept of Justice has been under way since late 2016, and is likely to look at, for example, introducing a “serious harm test”, similar to one in the UK, whereby a complainant has to show they were damaged by something written about them, a cap on damages, and whether juries should continue to decide defamation trials.

In the meantime, however, “the way our defamation regime is set up gives rise to the very real concern that it has a chilling effect on investigative journalism,” says Phelan.