Dancing with the Stars: Judges in the dock as Demi Isaac Oviawe voted off show

Review: Comedian Fred Cooke fell during dance off but judges voted to save him

Actress Demi Isaac Oviawe was lost in a dance-off elimination against Fred Cooke on Sunday 17 February. Video: Dancing with the Stars/RTE One 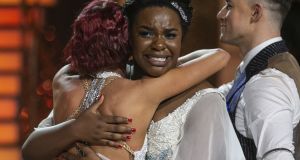 Demi Isaac Oviawe after she was voted off Dancing with the Stars. Photograph: Kyran O’Brien

Finally, the phoney war ends on Dancing With The Stars and we arrive at the blood-on-the-carpet stage of the competition. The dance-off elimination has returned, with Demi Isaac Oviawe losing out to Fred Cooke in a tension-filled finish.

This is sure to go down as a controversial decision – that is certainly Twitter’s instant take – with judge Brian Redmond and stand-in Darren Bennett giving the nod to funnyman Cooke despite him taking a tumble as he and Giulia Dotta reprise their quickstep to Dancing Fool by Barry Manilow.

Somehow he is spared and the likeable Isaac Oviawe, who has demonstrated real progress through the contest, is sent packing. Her waltz, with Kai Widdrington, is soundtracked by Alicia Key’s Fallin’. Yet the only fallin’ is by Cooke, who stays to jive another day.

The obvious suspicion will be that the adjudicators had their minds made up all along and that, even had she levitated, spun on her head and sprouted doves from her sleeve, Isaac Oviawe was for the high jump.

There is also a shock before we’ve even begun with judge Julian Benson crying off owing to illness and DWTS creative director Bennett stepping in.

The dancers are, for their parts, reunited with their regular professional partners following last week’s switch-up. Clelia Murphy and Vitali Kuzmin kick the evening for with a cha cha cha to She’s A Lady by Tom Jones.

“You’re a sensuous, sultry lady,” says Loraine Barry, sounding as if she could do with a lie-down and a glass of water. Also brimming with praise is new judge Bennett, who, if less flamboyant than Benson, is no less effusive. “Not just a lady – but all woman,” he thunders. Her 23 feels thoroughly deserved.

Next up, it’s Dublin footballer/human cardboard cut-out Denis Bastick and Valeria Milova, waltzing to I Wonder Why by Curtis Stigers (yes, Denis, some of us wonder why as well).

“Mr Consistent – you always deliver technically well,” says Bennett, slapping on the faint-praise with a shovel. “You’ve nailed the move, you need to nail the grove.” Bastick receives a respectable 20. Should he have been in the dance-off instead of Isaac Oviawe? A straw poll of one – i.e. me – says…yes!

Then comes early favourite Cliona Hagan and Robert Rowinski tangoing to Sweet but Psycho by Ava Max. Hagan has fun getting under the skin of the song and its celebration of expressive bonker-dom. “You look like a stun hun!” says Nicky Byrne. “You were nearly biting the camera!”. Her reward is a scorching 25.

Isaac Oviawe and Cooke are the next two up. How bittersweet for the former that she receives her highest ever score – 21 – and some of the most effusive praise to date. “I am definitely back in love with you,” says Redmond (not for long, eh Brian!). “I’m just glad you didn’t fall on your backside,” says Jennifer Zamparelli (we’re just glad you didn’t save that line for Fred Cooke, Jen).

Cooke does well too. “The dance was originally called the turkey trot – that look nothing like a turkey trot,” says Loraine Barry, winning the battle of the poultry-based metaphors.

Having been urged to calm down a tad, actor Johnny Ward proves he’s more than a one trick hoofer and she and Emily Barker rum to say You Won’t Let Me Go by James Arthur (sample lyrics: “I held your hair back when you were throwing up”).

“Come on Johnny,” shouts an excited audience member at the end – though whether they are responding to the dancing or the fact he’s forgot to button his shirt is hard to say (later it is revealed he underwent a “double dip” in the tanning booth by way of preparation). “I’ve never seen a male celebrity give me leg action like you’ve given me there,” says Brian Redmond. “Your backward walk actions.. absolutely phenomenal.”

Ward and the panel have had their differences – Twitter reckons they have been unfairly harsh on one of the season’s outstanding groovers. But this is the big kiss and make-up moment. It’s a clean sweep of nines and a blockbuster total of 27.

Then it’s another favourite, Mairéad Ronan, quickstepping with John Nolan to Nothing Breaks Like A Heart, by Mark Ronson and Miley Cyrus. “I wanted more and more and then you kept interrupting it!,” says Loraine Barry. “Very occasionally you sort of become a bit of a passenger.. if you can do that it will be tots emotes.. and totes amazing,” says Bennett. “Don’t worry about him,” chimes Redmond. “He’s only going to be around for a week or two,”

The curtain is then brought down by Peter Stringer and Ksenia Zsikhotska, who perform Charleston to Pencil Full of Lead by Paolo Nutini. Springer clearly hopes it will be all trike on the night as he starts off on a miniature bicycle – though the real talking points are the black star around his eye and the head-over heels he and Zsikhotska execute.

“Finally a breakthrough – creativity was fantastic,” says Bennett. “Great energy, bit of comedy… I love that roly-poly,” says Redmond, correctly identifying this as Stringer’s best dance so far. He dashes across the try-line with a personal high of 25.

And then it’s on to the heart-thumping segment of the evening as Isaac Oviawe and Cooke are voted in the bottom two by the public and must engage in the sacred ritual of the dance-off. Cooke is a likeable contestant and it’s hard to resent his continued participation. But Isaac Oviawe, who is in tears by the end, can feel hard done by as the Dancing with the Stars judges quickstep all over her dreams.

The Hundred Years’ War on Palestine: ‘no such thing as a Palestinian’
6