Dermot Bannon: Nothing in his ‘Incredible Homes’ show is translatable to Ireland 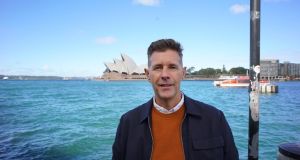 In Dermot Bannon’s Incredible Homes, he’s touring the world to look at other people’s fab houses

Dermot Bannon has done the State some service, of that there’s no doubt. His long-running TV series, Room to Improve, did more than anything else to wake Irish people up to the value of having an architect, even if what’s being planned is a relatively modest domestic extension.

Now, in Dermot Bannon’s Incredible Homes (RTE One, 9.30pm, Sunday) , he’s touring the world to look at other people’s fab houses, inviting us to ogle at them too. And where to start but Australia, “to see what I can learn from design Down Under”, as he says, even though it becomes clear that almost none of it is translatable to Ireland.

First, Dermot checks whether water in the washbasin of his hotel room on Darling Harbour goes down the plughole in the opposite direction to back at home; it does. Then, we’re off on jaw-dropping tours of four exceptional houses around Sydney, in between surfboarding off Bondi Beach; he falls off a lot.

There’s the award-winning Cabbage Tree House (by Australian architect Peter Stutchbury) that almost tumbles down a rock-face in the midst of a rain forest near Bayview. On first sight, Bannon is bowled over. “It’s so beautiful I could sit in a chair for the next two hours and just look at that!”, he gushes.

The cave-like house has an outdoor bath; it’s got indoor ones too, and he never loses an opportunity to hop in to them, to check out the views. Even the shower has full-height plate glass, looking out into the verdant landscape, while the family bathroom also has a glazed wall -- to a corridor. Eeek!

In Sydney’s Southern Highlands, Bannon utters the well-worn word “iconic” twice in the same sentence, saying: “I’m going to see one of the most iconic houses in Australia, designed by one of the most iconic architects”, Harry Seidler, in 1998. He even rents this cliff-edge house for a day, with access to all areas.

He has to get in first, and the key has been left under one or other of several perhaps spider-infested stones outside the front door, which terrifies Ireland’s favourite architect because he’s clearly arachnophobic. But once he steps in, he can “feel the calm” and enjoy views that “would take your breath away”.

With curvy roofs that give it an “incredible lightness”, Bannon – having paid for the place – lounges around on easy chairs, a bed with a view (“Imagine waking up to this … you just want to drink it in!”, he exclaims) and even takes a bath, with suds. Then he yells “Hello Australia!” from the cantilevered balcony.

Yet another “amazing” cliff house, designed by Renato D’Ettore, overlooks Gordon’s Bay, south of Sydney. Four storeys high, it employs perforated brick walls as sun screens. And here’s the rub: in Ireland, architects seek to bring natural light into a house, but in Australia, it’s all about the opposite.

D’Ettore’s design included big picture windows to frame view, a swimming pool and a wine cellar cooled by a damp stone wall behind very tall glazing. “Everywhere you go, there’s another little piece of joy”, says Bannon. “I’m in love with this place. Serious house envy. This is magical”, he tells the proud owners.

But it’s in the ha’penny place compared with a multi-million house, a “sculpture to live in”, by William Smart for billionaire art collector and divorcee Judith Nielson. With unlimited funds, what she wanted was not only the best house in Sydney or Australia, but in the world.

Called Indigo Slam, after a detective novel she’s never even read, the house has a soaring entrance hall, more than 12m high, with a staircase wide enough for a horse to walk up and down (if needed). Dermot is almost speechless. “It’s one of the most beautiful spaces I’ve ever been in,” he says.

Built in the “happening” Sydney district of Chippendale, it has a diningroom with a very long table big enough to seat 60, flanked on one side by a series of pivoted oak doors, each weighing 200 kilos. All of the furniture was custom-made and designed to complement the Chinese art that Nielson collects.

Bathrooms, of which there are several, are all done in marble, as is the spotless kitchen counter top, betraying no evidence that a meal has ever been cooked there. “You know, there’s just the three of us. We’re more than happy,” its owner says – the others being her two little dogs, Cumin and Wasabi.

And believe it or not, Dermot Bannon never realised that the truly iconic Sydney Opera House’s “sails” are clad in ceramic tiles. I thought everyone knew that.