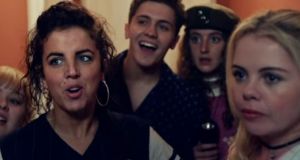 The first teaser trailer for the second season of the phenomenally successful Derry Girls series has been released by Channel 4. The series scripted by Lisa McGee became Channel 4’s most-watched comedy since 2004. It’s opening episode is also the single most-watched TV programme in Northern Irish history.

McGee’s used her upbringing in Troubles-era Derry as the inspiration for the show which centres on four schoolgirl friends who attend attend a convent school.

The teaser shows the four friends on a school trip where they meet some Protestant schoolboys.

All the main actors and characters return, with the lead role of Erin played by Saoirse-Monica Jackson; Louisa Harland is her cousin Orla; Jamie-Lee O’Donnell and Nicola Coughlan play pals Michelle and Clare, while Dylan Llewellyn stars as Michelle’s English cousin James.

“This is not a drill,” actor Nicola Coughlan wrote on Twitter. “Series 2 is so magic, I’m so proud of it.”

Channel 4 has yet to announce the broadcast date for the new series.