Nothing settled as Peter Casey meets Travellers on Newstalk 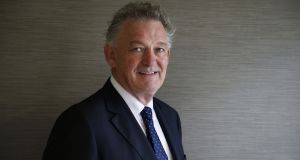 For those worried that Newstalk has succumbed to the dread scourge of political correctness, last week must prompt mixed emotions. The bad news is that following the influx of female presenters – well, one at least – the station has given a debut to another figure from a sector of society whose on-air representation is at unacceptably low levels. The good news is that the minority in question is outspoken older men with controversial views, in this case businessman and former presidential candidate Peter Casey, who delivers a series of reports for the Pat Kenny Show (Newstalk, weekdays).

Following the departure of George Hook and Paul Williams, the station’s roster of grumpy old geezers has begun to look worryingly tokenistic, but the arrival of Casey, albeit temporarily, helps fill the quota. In a further bonus for listeners concerned about the invidious effects of cultural sensitivity, Casey is on air to meet the Traveller community, about whom he made contentious remarks during his election campaign. If nothing else, radio fireworks seem guaranteed.

Grandly billed as “the Peter Casey reports” by Newstalk – though not by Kenny, notably enough – the items actually turn out to be flat if dispiriting affairs. Accompanied by reporter Barry Whyte, Casey meets various Travellers, talks to them about their experiences and sticks doggedly to his position that they shouldn’t be recognised as an ethnic minority. “Don’t be ridiculous,” he scoffs. “There is absolutely no difference between my DNA and a Traveller’s DNA.”

Instead, Casey prefers the term “subculture”, with one specific criterion for membership, as he emphasises when stating his belief that comedian Martin “Beanz” Warde is not a Traveller. “The fact that you’re living in a house means you’re not a Traveller,” Casey says, despite Warde coming from a Traveller family. Still, their encounter is unexpectedly civil, as Warde seeks common ground between the pair.

Casey, for his part, stresses his lack of prejudice. “If the 342,727 people who voted for me, voted for me because they thought I was racist or because I was against Travellers, then they voted for the wrong person,” he says, displaying an impressive recall of voter numbers. Meanwhile, he sounds tetchy when Whyte questions how much he knows about Traveller history. “Change the attitude,” he snaps. Visiting a halting site in north Dublin, he voices concern at the poor conditions there, speaking of the necessity to “break the cycle” of high poverty and mortality rates among the community. “It’s clearly not a healthy culture,” he says.

But though he concedes to community worker Angela O’Neill that this state of affairs is “tragic and wrong”, he adds, “they choose to live in halting sites”. He is also opposed to housing being “gifted” to Travellers on the grounds of their background. (Indeed, he wonders whether anyone should have a “God-given right” to a house, which speaks of a conventional and perfectly legitimate conservative outlook.) Judging by the number of favourable messages Kenny reads out after the reports, Casey’s views enjoy considerable support, as texters voice their grievances about “entitled minorities”.

Casey’s merits as a broadcaster are harder to discern, however. His idea of debate in these first two slots (two more are due next week) largely consists of slapping down opposing ideas as “nonsense” or “silly”, while he often sounds irritable and flustered when challenged. Whether his Newstalk venture is a fearless exercise in journalism or a cynical ratings grab depends on one’s point of view, but on this showing a lasting career in radio seems unlikely for Casey. Then again, the same was also once said about his electoral appeal.

The emotive issue of housing also features on the Ray D’Arcy Show (RTÉ Radio 1, weekdays), though the emotions are fondly nostalgic rather than angrily outraged. Rather than discussing accommodation shortages, D’Arcy focuses on the bittersweet impact of selling family homes when parents have passed on. He talks to Clare, a listener who wrote an email about her own family home that struck such a chord that the host has invited her on to the show to expand on the subject.

The resulting conversation is by turns reflective, quirky and gossamer-light. Clare, whose father died last year, talks of her sadness at the sale of the Dublin house she grew up in and how she tried to “distill all my memories” with one last visit. To this end, she has brought a bag of sundry artifacts she took from her old home. D’Arcy describes the random haul of hair bows, pens and shoes: “I don’t want the people who are listening on radio to feel left out,” he says, helpfully.

There are unexpectedly melancholy moments: Clare talks of houses “still being there after all the people who were there are gone”. But it’s at best diverting fare. That it’s one of the highlights on D’Arcy’s show underlines how much it has become a bland human interest magazine.

For every captivating item, such as his difficult conversation with young Dublin woman Emma O’Toole about her recovery from anorexia, there is fluff such as an interview with the winner of the Mr Ireland contest. D’Arcy, to his credit, sounds engaged throughout, changing his tone depending on the topic at hand. But for much of the time, the content is so generic as to elicit a kind of perverse awe at its dullness.

The sorrow of departing an ancestral home also runs through Leaving The Island (Newstalk, Sunday, repeated Saturday), a documentary which looks at life among the declining populations of Ireland’s offshore isles. Produced by Maurice Kelliher and Shaun O’Boyle, the programme concentrates on the effect of depopulation on the Donegal islands of Rutland, Inishfree and Arranmore, as inhabitants past and present recount the reality – and the joys – of living in such isolated circumstances. With historian Diarmaid Ferriter providing wider analysis, it’s a gently paced but quietly absorbing look at existence on Ireland’s margins, both physical and metaphorical. If only all minorities got such a nuanced hearing.

On Wednesday’s Morning Ireland (RTÉ Radio 1, weekdays), Minister for Finance Paschal Donohoe talks to anchor Rachael English about the spiralling cost of the national children’s hospital, giving a masterclass in meaningless buzzwords that irks even as he “accepts” his role in the affair. “Clearly we have learnings in relation to this,” Donohoe says, adding “we do have a number of learnings for the future”. English pointedly highlights the public being “pretty cynical about lessons being learnt”, but the Minister still persists with his singular phraseology: “These are what the learnings are.” Such bland corporate jargon doesn’t suggest humility: the Minister maybe needs some teachings.