Celebs Go Dating: Muggy Mike Thalassitis and a nightmare vision of the world 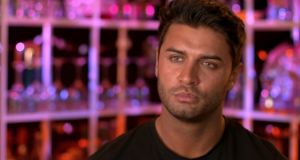 ‘Muggy’ Mike Thalassitis: Lacks any kind of charisma or even a vague personality beneath his shark-like veneers and Ken doll hair. Photograph: Channel Four

Has there ever been a reality star as objectionable as “Muggy” Mike Thalassitis? The snarling Love Island lothario has sleazed back on to our screens as a potential match for unhappy girls with perilously low self-esteem on E4’s Celebs Go Dating.

It’s a show where lucky “civilians” get to be wined and dined by such luminaries as actor Jonathan Lipnicki (the kid that rattled off facts about the weight of a human head in Jerry Maguire) hyperactive posho Sam Thompson from Made in Chelsea and the delightful Mike.

Muggy Mike is so assured of his physical prowess that he doesn’t do much in the way of trying to charm the ladies. His approach is that of a mating Silverback gorilla, pouting his lips and hulking himself around in an aggressive fashion, looming in the background before muscling in on clueless Sam’s dates by popping his giant head in front of his potential rival like an indoor eclipse.

His schtick consists of him standing in front of the girls looking like a regurgitated Yorkie bar asking them how much they fancy him before thickly mumbling about how good in “the sack” he is – transforming into an amalgamation of every brain-dead bully from an 1980s teen movie.

If he’s not wowing them with his conversation (“You’ve a nice bum”) he’s “negging” them, peppering his juvenile chat with insults, backhanded compliments and most shockingly on one meet-up, vile, graphic comments spoken in Greek about where he would insert certain objects into his date’s body, leaving the girl in ignorance laughing nervously at him as he downs another shot.

Rather than attempting to expand on his Love Island persona and challenge expectations or be a cheeky, loveable rogue, he’s doubled-down on appearing not just like a heartless cad but one who is alarmingly misogynistic.

For what is normally a lighthearted if albeit crass reality-dating series, Mike’s brooding, disrespectful presence weighs heavy in each show. Every inch of a girl’s body is examined and dismissed by him before she has even sat down or uttered a word.

Lacking any kind of charisma or even a vague personality beneath his shark-like veneers and Ken doll hair, Thalassitis makes Patrick Bateman look like an infinitely more attractive bedfellow – at least he had some jokes and a classic vinyl collection.

It’s not all terrifyingly narcissistic women-haters though, at the opposite end of the spectrum there’s the show’s saving grace – the hurricane of hilarity that is Ms Gemma Collins. Much like the uncontrollable chaos that Charlotte Dawson brought to the series last year, Gemma is the formidable force to be reckoned with.

From insisting on sitting alone behind a velvet rope in a cornered off VIP area when she was supposed to be mingling with the singles to shutting down a gormless taxi-driver who repeatedly referred to her as “love” (even though she was calling him “honey”) to exiting a date after four minutes due to her match telling her that she was a diva for arriving over half an hour late, Gemma is a glorious monster.

Unlike Mike, the TOWIE star implicitly understands her worth and what her audience expects from her, playing up to her accepted image as the ego crazed “GC” (“I am an icon!”) but also, more importantly, having fun with it.

Ultimately Celebs Go Dating is a cautionary tale. A nightmare vision of a world that the reality telly paramour would be forced to inhabit – full of TV Now red-carpets, teeth-whitening and dermabrasion holidays in Turkey, Twitter feuds and selling job lots of Chinese tea on Instagram. If anything, it makes swiping right in your PJs from the comfort of the couch seem like the real dream.