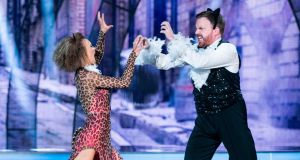 “If it was called ‘Having the Craic with the Stars’, I would have won it,” says 2FM presenter Bernard O’Shea after the judges gave him the boot on Dancing with the Stars. As the fourth celebrity to be voted off, he had to face fitness instructor – and brother of Conor – Erin McGregor in the Dreaded Dance Off. It was never going to end in his favour.

The DDO works as follows: between the public vote and the judges’ scores, the lowest scoring dancers have to dance off against each other, and based on that performance alone, the judges choose who gets the boot. This process puts the fear of god in the dancers, resulting in better performances for the rest of the season.

For their final routine, O’Shea and Valeria Milova’s Viennese Waltz to Tom Jones’s What’s New Pussycat? is everything you would expect from an O’Shea routine; funny, a little bit weird and simple.

O’Shea was the show’s secret weapon. He brought mayhem to the over-scripted lines from hosts Amanda Byram and Nicky Byrne and he regularly left the judges in fits of laughter. Without him, there will be no more laughter. Goodnight, our sweet prince. You served us well.

McGregor’s place in the bottom two this week is a bizarre move as her paso doble with Ryan McShane delivered the very first 10 of the series. It goes to show that high scores for technical excellence can only go so far, with popularity pushing dancers to places they shouldn’t be, which brings us to Marty Morrissey. Scoring 16 points, he and his partner Ksenia Zsikhotska are coasting by while the rest of the stars are giving their all. There was little room for error in his safe foxtrot this week but with the return of the DDO, his place in the competition should be on shaky ground.

The rumba, according to model Alannah Beirne, is “kind of like being a tiger at his prey” but thanks to the chemistry she has with her partner Vitali Milova, they made a killing on the dance floor with theirs. But judge Brian Redmond pointed out they broke a key rule of the rumba because Milova lifted Beirne off the floor and as anyone on the street can tell you, there are no lifts in rumba.  However, with 22 points, they are safe.

Waltzing to The Rainbow Connection by Sarah McLachlan comedian Deirdre O’Kane, who hosted the Ifta awards during the week, and her partner John Nolan are technically beautiful, rising and falling gently across the floor. The judges, however want a little bit more from her before awarding her 20 points.

From gentle to rough, Olympic race walker Robert Heffernan cracks it up a notch. Dancing the salsa to Ricky Martin’s Livin’ la Vida Loca is a bold move but by swinging his partner Emily Barker around, with only her leg around his neck as a safety net, Heffernan is feeling dangerous and those risks land him 21 points.

While O’Shea was Dancing with the Stars secret weapon, camogie player Anna Geary is the show’s outright star. Scoring a perfect 30 for her Charleston with Kai Widdrington, judge Julian Benson’s praises reach a shrieking point that only dogs can hear. Her progress this week has pushed her to a level above the rest but with just seven celebrities left in the competition, the coveted glitterball trophy is in sight.