Architect Dermot Bannon tells Daniel O’Donnell and his wife Majella how much it will cost for their desired home improvements. Video: RTE 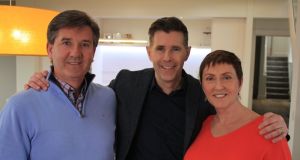 When Dermot Bannon reveals his plan to resistant Daniel and insistent Majella O’Donnell, nobody seems pleased

From the stage during a live concert, Daniel O’Donnell corrects a rumour that has accompanied his appearance on the new series of property makeover show Room to Improve (RTÉ One, Sunday, 9.30pm) – he and his wife Majella are not getting a free house.

“Begod, we found out today what we’re paying for it,” Daniel says, with that familiar velvet purr. “It’ll take more than him to get it out of me.”

The architect Dermot Bannon may already have had an inkling, but this is our first sign that the O’Donnells will be tricky customers.

It also recasts the power dynamic of the show, no longer a display of regular folks either swooning or chafing under celebrity instruction.

Instead we get what we might call a clash between titans of factual television. The official title of the programme is Daniel and Majella’s Home Tour | Room to Improve, as though even getting this show off the ground required some tough negotiation and compromise. So it proves to be.

At their sprawling home in Donegal’s majestically rugged Kincasslagh, Daniel reluctantly agrees the place is “in need of a wee facelift”.

That makes it quite unlike him, so smooth, minimal and well-preserved Dermot must envy its sleek design. Majella, who spends more time there, would like to love it a bit more, which the oppressiveness of its pinched arch doorways and abundant use of grained wood make hard to do.

By and by, over Daniel’s prickly resistance and Majella’s insistence, Dermot reveals his plan. Nobody seems pleased.

“Does this look like somebody who is not happy?” Majella objects to the camera. There is no diplomatic way to answer that question.

Daniel, on the other hand, is almost unreadable, which seems to be the source of his immense power. That he does not like the plan is obvious, but when he purrs the words, “Now, Dermot, let me take you upstairs for a minute,” Dermot could be forgiven for wondering if he was ever coming back.

Nowhere does Daniel seem more apoplectic, though, than when he refuses eye contact with someone. This seems to happen a lot, especially when the cost of the build almost doubles the original budget.

“I just feel really dejected,” the usually enthusiastic Dermot confides, and if his dismay is genuinely affecting it is because he may be the most readable person on television. What begins as a programme’s celebrity edition, becomes a more fascinating tussle between personalities.

I have to admit my sympathies swerved from one party to another throughout. Daniel’s fixation with en-suite bathrooms may seem excessive, even to him, but he must be flush enough.

Majella’s tragedy is to have been in an unhappy relationship with wood for 11 years, and she now demonstrates all the signs of xylophobia. “I didn’t rip out a feckin’ wooden kitchen to put in friggin’ plywood,” she seethes over Dermot’s timber collection. The PG-rated swear words seem like shotgun blasts.

Dermot, bitterly wounded by every modification to his design, tends to reflexively undermine Daniel and Majella’s tastes. “You do?” he responds disbelievingly every time they profess some forbidden fondness: for an old wardrobe, an ornate light fixture, a non-timber floor surface.

There seems to be no compromise between Dermot’s desire for texture and warmth, and their plea for non-Scandinavian woodless cosiness. It becomes an unwinnable argument between a vision and a feeling.

And then, all of a sudden, it somehow exists. Opened wide by an impossibly big window, it is a bright vision of contemporary, textured, warm, vaguely Scandinavian cosiness, with wood-effect tiles and an en-suite bathroom in every conceivable direction, coming in at only one-and-a-half times the budget.

“A big part of it was making it their home,” says Dermot, a bigger negotiation than it sounds.

And everybody seems thrilled. Even Daniel, for all we know.

Ennio Morricone, genius: ‘I didn’t know I was doing anything new or revolutionary’
9